Almost 2 weeks after Chris “Fredo” Cuomo was sacked for abetting his brother (former governor) Andrew Cuomo with his sexual misconduct, a CNN producer has just been indicted for luring young girls to his home for sexual indoctrination “training”.

An old tweet hasn’t aged well for the CNN producer who was arrested last week and charged with “using a facility of interstate commerce” to allegedly lure young girls to his home for depraved sexual indoctrination “training” sessions.

The cable news network was still dealing with managing the fallout from the firing of Chris Cuomo when John Griffin, who claims he worked “shoulder-to-shoulder” with the disgraced star anchor, was taken into custody by the FBI which acted after a grand jury delivered an indictment that he used social media to “communicate with people purporting to be parents of minor daughters” in order to try to “persuade parents to allow him to train their daughters to be sexually submissive.”

……Sickening new details have since emerged from the now unsealed indictment including that he “sexually trained girls as young as 7 years old” and advised a mother that her 14-year-old daughter “would be a good candidate for such training.” He allegedly proposed that training would begin on a video chat where he “planned to instruct the 14-year-old and her mother to remove their clothing and touch each other” and eventually declared in-person meetings would include “spanking” and “c–k worship,” according to Fox News.

The news outlet added, “According to the indictment, Griffin sent text messages to a mother of two daughters, ages 9 and 13, which stated, “One of the big lies of this society is that women are delicate innocent angels and they are in actuality, naturally, the dirtiest sluts possible, in EVERY metric.”

Griffin, who was senior producer for CNN’s “New Day” and reportedly claimed to have worked “shoulder-to-shoulder” with Cuomo also stated that, “he believes there is a “wanton whore” at “the core of any” female and that “a woman is a woman regardless of her age,” according to the indictment.

With Griffin facing the possibility of a lengthy stay in prison, his history will be put under a microscope by media and internet sleuths and one of his old tweets, which was just dug up, has already drawn attention on Twitter. 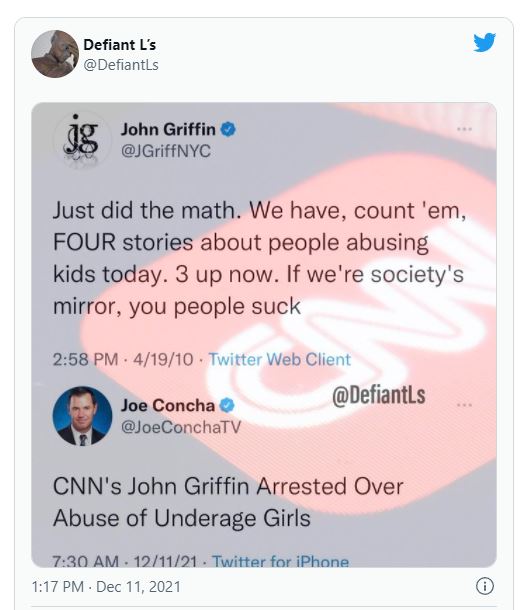 ……Griffin’s Twitter feed has come back to haunt him along with Cuomo who, in addition to dealing with his own sexual harassment scandal and ethical abuse issues, is being dragged over his chumminess with his former CNN colleague who, according to his LinkedIn profile, bragged of working “shoulder to shoulder” with the ousted anchor. 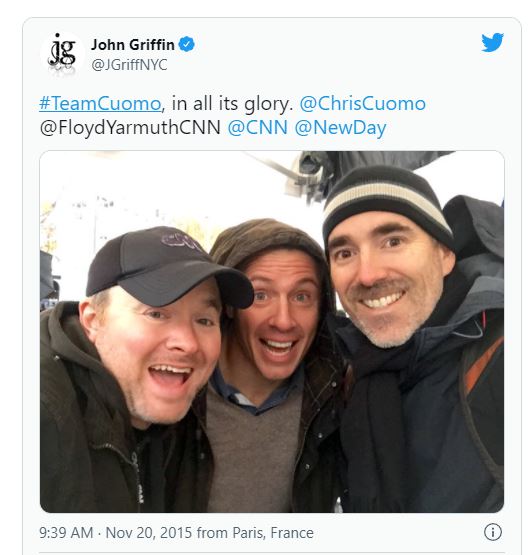 In a statement released Friday, the Justice Department provided details on the indictment, noting that “from April to July of 2020, Griffin utilized the messaging applications Kik and Google Hangouts to communicate with people purporting to be parents of minor daughters, conveying to them, among other ideas, that a ‘woman is a woman regardless of her age,’ and that women should be sexually subservient and inferior to men. On these communication platforms, Griffin sought to persuade parents to allow him to train their daughters to be sexually submissive.”

“In June of 2020, Griffin advised a mother of 9- and 13-year-old daughters that the mother’s responsibility was to see that her older daughter was “trained properly.” Griffin later transferred over $3,000 to the mother for plane tickets so the mother and her 9-year-old daughter could fly from Nevada to Boston’s Logan airport. The mother and child flew to Boston in July of 2020, where Griffin picked them up in his Tesla and drove them to his Ludlow house. At the house, the daughter was directed to engage in, and did engage in, unlawful sexual activity.”

According to the Vermont US Attorney, the indictment “also includes specific allegations that Griffin attempted to entice two other children over the internet to engage in sexual activity” via a “virtual training session” in which he would instruct a “mother and her 14-year-old daughter to remove their clothing and touch each other at his direction,” according to the statement.

Jesus Christ. That “mother” should be indicted as well. What a piece of shit.

Griffin is a classic misogynist and a fucking pedophile. He’ll make a real nice prison bitch.

CNN is an enclave of sex offenders and perverts.  Don Lemon, the network’s resident pouf, is a sexual predator who can’t keep himself from making unwanted advances.  Jeffrey Toobin is still there in spite of jacking off during a Zoom call with his colleagues.

This is probably just the tip of the iceberg.