And all this time the Dems claimed that Republicans fostered violence against journos.

German was in the midst of investigating Telles for a series of allegations including emotional stress, bullying, favoritism, and an “inappropriate relationship” with a subordinate that harmed the office’s ability to deal with the public in overseeing the estates of those who have died.

Police arrested Telles, 45, a day after releasing photos of the suspect and the suspect’s vehicle, as the Las Vegas Review-Journal, where German worked since 2010, first reported.

Review-Journal reporter Brett Clarkson said Telles was “taken out of his house on a stretcher and loaded into an ambulance.”

……On Tuesday evening, the Las Vegas Review-Journal observed Telles, a Democrat, standing next to a vehicle that matched the suspect vehicle’s description.

German had recently written about allegations of a hostile work environment in Telles’ office. The public administrator had lost his bid for re-election in June after German published his findings, the outlet reported.

The journalist had also recently submitted a public records request for text messages between Telles and three other county officials, according to the Review Journal.

The Las Vegas Metropolitan Police Department (LVMPD) on Thursday announced that Clark County Public Administrator Robert Telles — a suspect in the stabbing death of investigative journalist Jeff German — allegedly cut up his hat and shoes in an attempt to destroy evidence.

Police on Tuesday released a photo of the suspect in German’s Aug. 3 killing wearing a bright orange jacket, a large straw hat, black pants and gray sneakers. On Thursday, police revealed that they recovered a cut-up straw hat and cut-up gray sneakers with blood stains from Telles’ home during their investigation into German’s murder.

The items were cut up “in a manner that was likely an attempt to destroy evidence,” LVMPD homicide Det. Dori Koren said during a press conference.

Police also found Telles’ DNA at the scene of the crime. 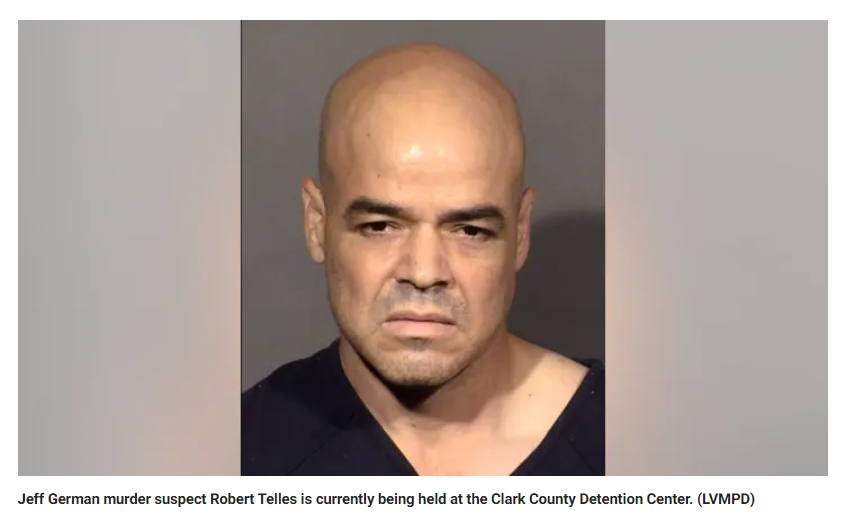 CNN, ABC, NBC, CBS, and MSNBC all ignored Telles’ party affiliation. If he were a Republican….you know the rest.

When the Obama regime targeted journalists for harassment, the leftwing MSM couldn’t have cared less.  Their concern depends on the target. Dems aren’t subjected to the same scrutiny as the GOP.  But criticize the blatant media promulgation for the DNC and get called “violent”.

At the press conference responding to the murder, a shitbag reporter decided to ask the sheriff whether he condemned DONALD TRUMP for the crime.

At the press conference responding to the incident, a reporter decided to ask the sheriff whether he condemned DONALD TRUMP. pic.twitter.com/g2N6PcAg4q

That’s how leftie journos operate. Don’t blame the Dem who committed the crime, blame President Trump because, orange man bad. Evidently, Donald Trump is responsible for every thing from Monkey Pox to their erectile dysfunction.

A good response to that bullshit:

Here's Rick Wilson from the Lincoln Project casually saying that people need to "put a bullet in Donald Trump"@SecretService pic.twitter.com/LkOcBhKisz

No matter how they spin it, DemProgs and their media lackeys are responsible for the politically-charged violence against citizens who don’t share their particular brand of insanity. One of their devotees travelled all the way across America with the intent to assassinate Judge Brett Kavanaugh. Another one shot people at a GOP baseball game. An unhinged camera operator who worked for liberal networks got just a slap on the wrist after threatening to kill GOP Rep. Matt Gaetz and his family.

There were five separate attempts on President Trumps life, including illegal alien Michael Steven Sandford’s attempt to grab the pistol of a Las Vegas Metropolitan Police officer providing security for a Trump rally. Upon arrest and after waiving his Miranda rights, Sandford claimed that he had wished to kill Trump to prevent him from becoming president.

The media didn’t pay much attention to any of that.