Disney officials push the LGBT agenda and wail against the parental rights bill, HB 1557, in Florida, while their employees are grooming children for sex. 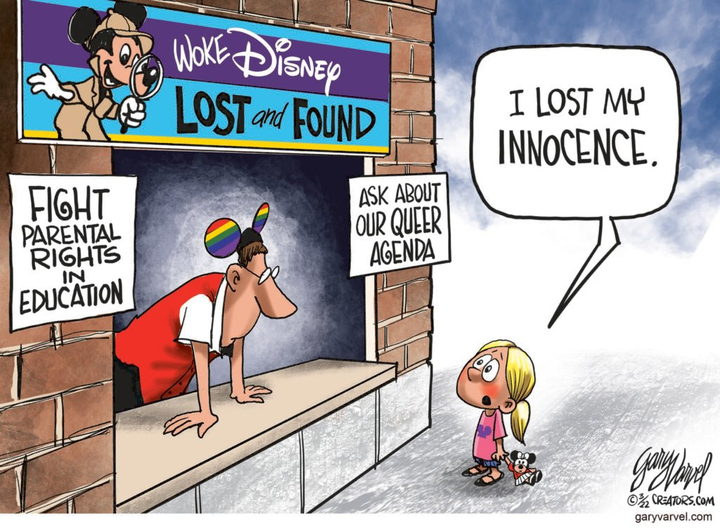 The Walt Disney Company has long presented itself as the voice for America’s children. According to company lore, the animation studio was founded by a wise and kindly father figure, and its theme parks are “the happiest place on Earth” for kids. In recent weeks, the company has entered the political debate about Florida’s Parental Rights in Education legislation and sought to establish itself as a moral arbiter on children’s education and sexuality.

But behind its meticulously curated self-image, Disney has had a long-standing problem with child predators gaining employment within the company and exploiting minors. In 2014, reporters at CNN published a bombshell six-month investigation that discovered at least 35 Disney employees had been arrested for sex crimes against children, attempting to meet minors for sex, and possession of child pornography over the previous eight years.

The stories are horrifying. In one case, police set up a sting operation that nabbed three Disney employees who believed they were soliciting sex from minors. Robert Kingsolver, who oversaw ride repairs at Disney World, enticed someone he thought was a 14-year-old girl for sex in a private residence. Joel Torres, another Disney employee, allegedly brought condoms with him to have sex with a 14-year-old child. And Allen Treaster, a concierge at the park’s Animal Kingdom Lodge, went to meet a 14-year-old boy to “fulfill a fantasy” of being a “Big Teddy Bear for younger chaser.” In all three cases, the men were met and then arrested by police, who had set up the trap to catch child predators in the Orlando region. Kingsolver denied the charges; Treaster admitted that he had molested a 15-year-old boy a few weeks prior to his arrest.

Why Disney? Polk County Sheriff Grady Judd, who oversaw some of these investigations, explained why child predators would choose the Magic Kingdom as a place of employment. “Wherever you find children, you’ll find sexual predators,” he told reporters.

……Even worse, despite its crystal-clean image, Disney has come under fire for failing to report abuse. In 2014, after a crewmember on the Disney Dream cruise ship was caught on security cameras molesting an 11-year-old girl, Disney authorities failed to report the crime until after the ship had left port, which allowed the man to evade arrest. When one security officer protested, Disney authorities allegedly told her to “keep your mouth shut” about the crime. Moreover, according to advocates associated with the International Cruise Victims organization, Disney’s trade-association lobbyists had worked to oppose and then water down federal legislation that would have required stringent safety and reporting protocols for sexual abuse on cruise ships.

Walt Disney is spinning in his grave. He never envisioned the cesspool of perversion that took his company over.

This is politically motivated ideology. Period.  Kids are being sexualized with gender identity. They don’t have the capacity to understand the complexities of sex, gender, or the depraved projections of the Left.