From the Wall Street Journal.

Two days after Egypt’s military replaced the country’s president, it sent soldiers into the streets to quell demonstrations, as a week of tensions between Islamists and the military transformed into deadly confrontations that heightened some Egyptians’ fears of civil war.

Demonstrations turned bloody Friday as hundreds of thousands of Muslim Brotherhood supporters turned out to protest this week’s military-led ouster of President Mohammed Morsi. Muslim Brotherhood officials said police opened fire on protesters in the Cairo suburb where Mr. Morsi and 12 aides were being held under house arrest, killing five people. The military denied those allegations.

Later in the day, armored personnel carriers arrived on the October 6 bridge, near Tahrir Square, to restore order after rival camps clashed with rocks, fireworks and, according to several witnesses, gunfire from automatic weapons.

At least 30 people died in violence across the country, with another 1,076 injured, officials said.

……Earlier Friday, the Muslim Brotherhood’s leader addressed tens of thousands of supporters who gathered for “Rejection Friday” protests, urging them to continue protesting until Mr. Morsi is reinstated.

“We will protect our president Morsi with our necks. We are all willing to sacrifice our necks and souls for him,” Brotherhood General Guide Mohammed Badie told hundreds of thousands of demonstrators at Cairo’s Rabaa Mosque.

And lookie here, Obama the Dhimmi has managed to piss off both sides:

Both pro-Morsi Islamists and the anti-Morsi Rebel group accuse the U.S. of supporting the other and allege elaborate conspiracies against Egypt. 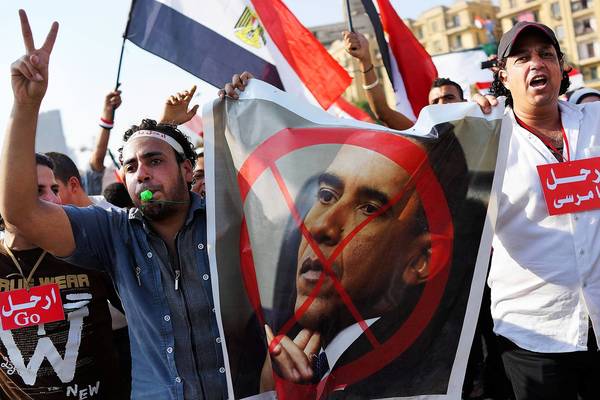 Meanwhile, Obama says: I got your back, Muslim Bros:

The Obama administration has stopped short of condemning the July 3 military takeover, it has called on Egyptian leaders to pursue “a transparent political process that is inclusive of all parties and groups,” including “avoiding any arbitrary arrests of Mursi and his supporters,” Bernadette Meehan, a spokeswoman for the National Security Council, said July 4 in a statement.

This is coming from the most corrupt, murky regime in American history.

Power loves a vacuum.  The Middle East is saturated with hardcore Islamist thugs just waiting for a chance to take over in Cairo.

Ansar al-Shariah just announced it will gather arms and start training its members in Egypt.

It doesn’t matter who gets installed as the next leader. He’ll be just as bad as all the others.