I love this guy.

A Florida sheriff on Monday advised new residents of the state who moved south from liberal states against “voting the stupid way you did up north.”

The remarks were made by Polk County Sheriff Grady Judd during a news conference held by Gov. Ron DeSantis (R) at the signing ceremony of a new anti-rioting bill passed by the legislature. Judd, who last September grabbed headlines for giving members of the media a visual aid to help them tell the difference between a peaceful protest and a riot, praised the governor and Senate President Wilton Simpson, House Speaker Chris Sprowls, and other lawmakers for prioritizing the safety of Floridians. 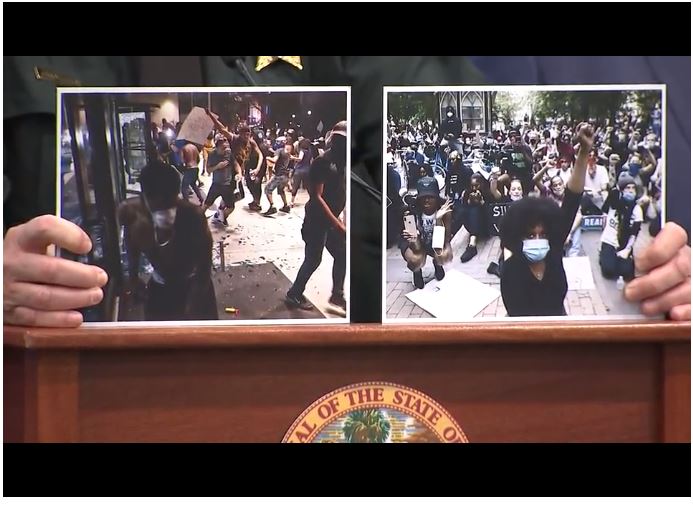 Riot on the left, peaceful protest on the right. Note the difference.

“Florida is a unique place and a special place. It’s where we work, where we live, but it’s also where the world comes to play, to bring their children — and their children have a right to be safe,” the sheriff said.

He contrasted DeSantis’ leadership in Florida with the governments of Seattle, Portland, and Minneapolis, where Black Lives Matter protests have devolved into violent riots that have set those communities aflame.

“We saw folks’ businesses around this nation who literally worked their entire life and had every penny in their life savings involved. We’re going to proactive and we’re going to make sure people are safe,” he continued…

“Pay attention, we got a new law and we’re going to use it if you make us. We’re going to protect the people.”

The new law, “Combating Public Disorder,” would criminalize “mob intimidation” — such as the practices of protesters accosting people at restaurants — and would increase penalties for rioting, looting, and related violence. The bill would also create legal protections for fleeing motorists who cause injury or death to rioters while attempting to drive away to safety.