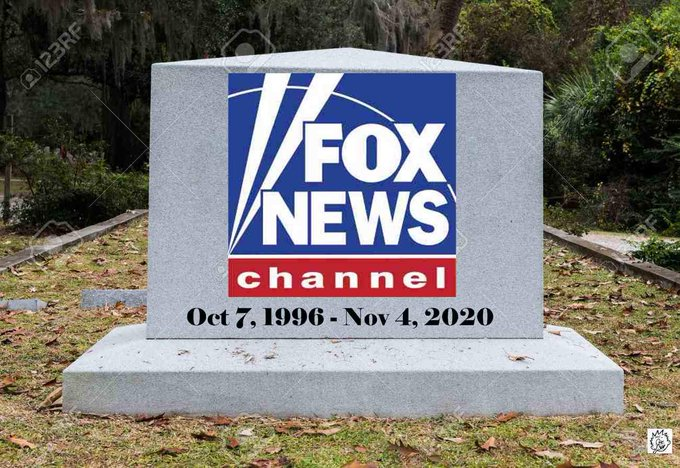 What was once a conservative counterpoint to the CBS-ABC-NBC-CNN-MSNBC leftwing conglomerate, is now a run of the mill tool for the Dems.

Their election 2020 coverage was absolutely shitty, and they refuse to acknowledge the rampant Dem voter fraud.

Make no mistake about it: Fox News is the network of Paul Ryan. For over a year now Ryan has been gloating that he was going to use his position on Fox’s board to ‘do something’ about Trump. This wasn’t a secret to anyone who has been paying attention to Fox over the course of the past year. Day by day Fox News slowly became CNN lite and the lone network of dissent in a sea of leftist propaganda succumbed to the will of our corporate oligarchy.

Without exception, Tucker Carlson is the only one worth watching on Fox. Everyone else is either too afraid to speak the truth boldly or has sold out as controlled opposition for the Republican establishment. This was obvious on election night and the days that followed.

Carlson boldly speaks truth to power day in and day out, which is why this summer Tucker Carlson Tonight broke the record for highest-rated program in U.S. cable news history. Carlson will undoubtably be remembered as the peak of humble and honest television news reporting as we start to witness network television’s inevitable and spectacular decline into irrelevance.

What comes next for media will look a lot like Gab.com or perhaps a hybrid approach like OANN and Newsmax. It’s crazy to believe that only a handful of Silicon Valley companies will have complete control over the flow of information, communication, and news forever. The future of media, news, and communication is a balkanized and decentralized series of alternative media platforms.

……In the midst of a heated legal battle over the numerous cases of fraud during the 2020 election, Fox News host Laura Ingraham said that Donald Trump should accept ‘the unfavorable outcome.” Fox News anchor Eric Shawn claimed that President Trump’s allegations of election voter fraud in Pennsylvania were “baseless,” “a lie”, and “not true.” Then Jeanine Pirro’s Show was canceled tonight after they found out she was going to report on election fraud.

If you are tuning into Fox News, then you are funding this madness. Sure the pundits and talking heads may spout off some talking points you may agree with from time to time, but when push came to shove and it mattered most: Fox News threw the President, and the country, under the bus and they’d do the same to you too if it meant making a buck and appeasing the establishment oligarchs who run this country.

One of the things that has been amazing to watch in this election cycle, is the presentation on FOX News and the way people are reacting to it.

People who consider themselves fans of the network are not happy with the direction it’s headed it, and are making themselves heard on social media.

For instance, take a look at this tweet from Bret Baier:

And now take a look at some of the reactions: 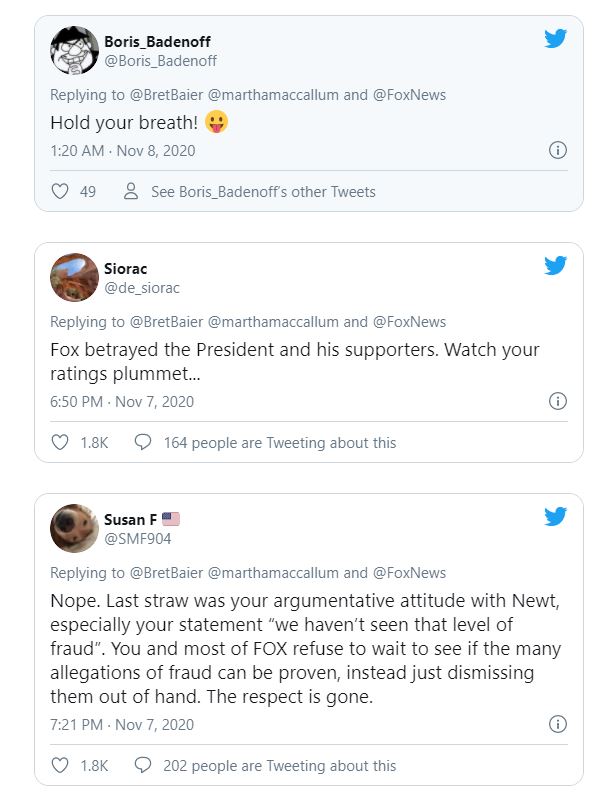 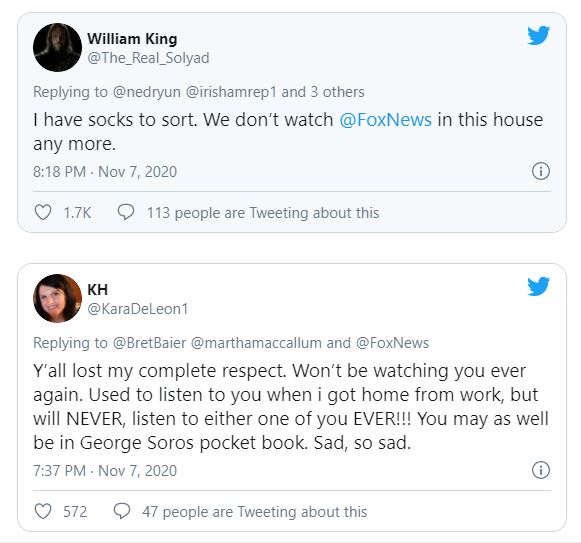 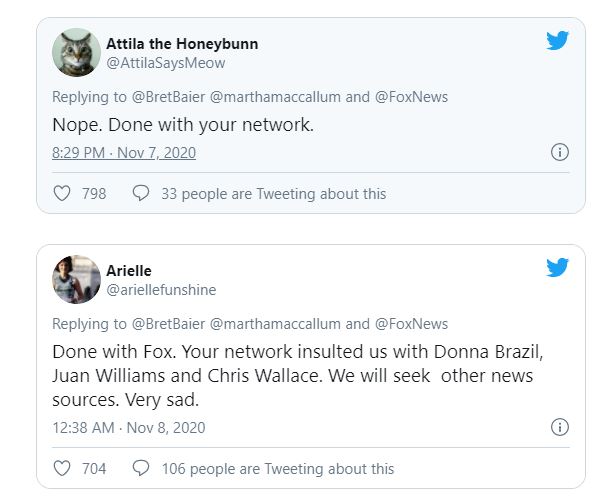 Looks like the reaction took its toll on Baier:

Once the hysteria over the presidential election recedes, it should be interesting to see what the Fox News Channel’s ratings look like. Online, there is definitely a backlash growing against the disgraced outlet.

What should worry Fox above all is that they appear to have forever lost their core viewers, the people who were once the most loyal.

The backlash had been brewing for a while but really took off after Chris Wallace’s dreadful and dreadfully biased and dishonest role as moderator in the first presidential debate between President Trump and Joe Biden.

The backlash then went nuclear after Fox News maliciously and erroneously called Arizona for Joe Biden on Tuesday night — a state that is still too close to call.

Fox News has stunk for years, but over the past few months it’s gone beyond stinking to out-and-out betrayal of its loyal viewers, especially with its presidential polls that are not simply incorrect, they are bald-faced lies.

If the ratio on the below tweet from Fox’s Special Report anchor Bret Baier is any indication, the backlash is nearing Defcon 1.

Here are some examples. Take a look for yourself.

On Saturday, all Bret Baier tweeted was “Join me + @marthamaccallum tonight 8pmET on @FoxNews,” and the responses were both brutal and hilarious.

……The problem, of course, is that in the form of OAN and Newsmax, Fox has legitimate competition now, and that’s just their broadcast competition. Online, Fox has all kinds of competition, including Breitbart News.

Juanita Broaddrick, I believe, speaks for many….

What’s so awesome about all this is that Fox News is now hated by everyone. The corporate media will always hate Fox, and now Fox has lost its base of support due to its own left-wing bias and a lot of flat-out lying.

And to top it off:

Kathryn Murdoch, the wife of heir to the Fox News apparatus James Murdock, is a dedicated Progressive activist and one who holds obvious sway over her husband.

Just before the election, as she was advocating for the Biden campaign on social media, she tweeted, “What will you tell your children or your future self about the part you played in history?” alluding to the notion of being on the wrong side of history if one was a Trump supporter.

Kathryn eliminated all doubt that she felt herself personally invested in a Trump defeat Saturday when she tweeted, “We did it!!!!”

The addition of RINO Paul Ryan to their board of directors was bad enough. When liberal shitstains Chris Wallace, Juan Williams, and Donna Brazile were on, I turned the channel.  Now, I won’t be watching anymore. The evening shows like Tucker, Hannity, Ingraham, Pirro, and Levin are not enough to compensate for the slide down into the cesspool of leftwing agitprop.

OAN and NewsMax are the new conservative counterpoints. That’s what I’ll be watching.