U.S. Representative Andrew Clyde (R-Ga.) prompted outrage this week following his remarks during a congressional hearing on the events of January 6, 2021.

Clyde, along with several Republican House members, is finally pushing back on the Democrats’ allegedly unassailable narrative about what happened that day. The roughly four-hour disturbance at the Capitol, as I’ve covered for months, is being weaponized not only against Donald Trump but also hundreds of nonviolent Americans who traveled to their nation’s capital to protest the final certification of a fraudulent presidential election.

Big Tech used the so-called “attack” on the Capitol as an excuse to achieve its long-sought-after goal to deplatform the former president; NeverTrumpers such as Rep. Liz Cheney (R-Wyo.) insist the chaos of the day was fueled by the “Big Lie”—in other words, the belief held by tens of millions of Republicans—and a good share of independents—that Joe Biden didn’t legitimately earn enough votes to win the White House. The Biden regime vows to use the “whole of government” to purge the country of “domestic violent extremists,” which is code for Trump supporters.

And the media continue to blatantly lie about the number of fatalities on January 6, including the myth that Capitol Police Officer Brian Sicknick died at the hands of Trump “insurrectionists.”

But some Republicans are fed up with all the myths, the Justice Department’s abusive manhunt for Capitol protesters, and the obvious double standards.

After citing the Russian collusion hoax and Robert Mueller’s special counsel probe as the “only insurrection” he’s ever witnessed, Clyde unloaded on former acting attorney general Jeffrey Rosen and former acting defense secretary Christopher Miller during their testimony before the House Oversight Committee on Wednesday.

Some videos, Clyde accurately concluded, looked like scenes from a “normal tourist visit.”

His comments caused the predictable pearl-clutching. House Speaker Nancy Pelosi (D-Calif.), who initiated the falsehood that January 6 was an “armed insurrection,” accused Clyde of being in “denial . . . and in the range of sick” for daring to call out the obvious discrepancies between cherry-picked video footage that showed scenes of violence and other recordings that showed far less dangerous activity.

……The facts, of course, are of no use or interest to the news media, Democrats, or NeverTrumpers who hope January 6 is the fatal blow to the Trump-supporting Right—a monster, in their view, that will not die no matter how hard they try—which is why, as another Republican congressman noted during the committee hearing, such virulent spin is necessary.

“Outright propaganda and lies are being used to unleash the national security state against law-abiding U.S. citizens, especially Trump voters,” Representative Paul Gosar (R-Ariz.) said in his opening remarks. “The FBI is fishing through homes of veterans and citizens with no criminal records and restricting the liberties of individuals who have never been accused of a crime. It was reported early, totally unconfirmed, that an armed insurrection beat a police officer to death with a fire extinguisher.”

Gosar asked Rosen whether the Justice Department confiscated any firearms from people who entered the building on January 6. (Rosen refused to answer but the answer is no.) Gosar also raised the killing of Ashli Babbitt, the veteran shot by an unidentified security guard. She was unarmed, Gosar noted, and “wrapped in an American flag.”

This is the shitbag who murdered Ashli Babbitt: 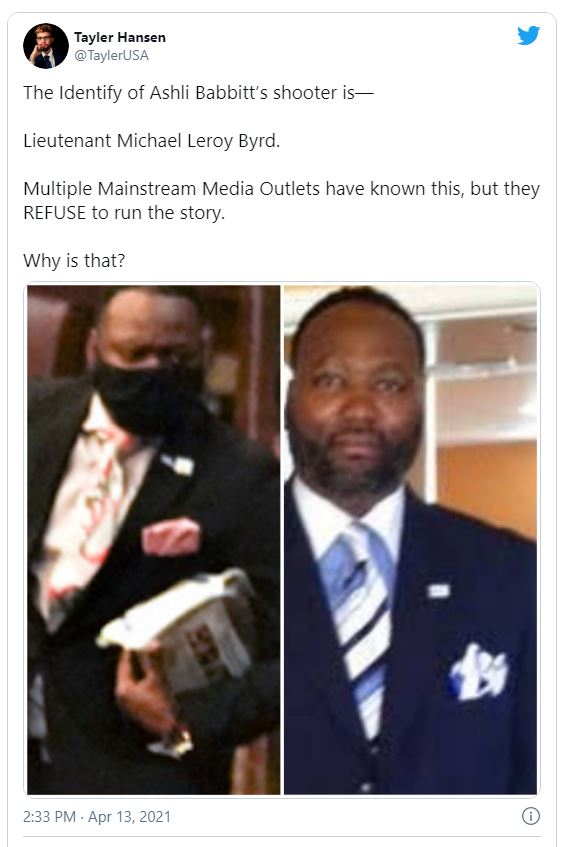 The Arizona Republican also called for the release of surveillance tapes recorded by the Capitol security system on January 6; the Justice Department and federal judges are concealing that footage from the public and even from defense attorneys. “The American public should see that footage,” Gosar said. “If my Democratic colleagues really want the truth, they would join me in demanding the release of this Capitol surveillance footage.”

Democrats, obviously, do not want the truth. Why bother with the truth when falsehoods and orchestrated optics, such as a rare memorial service in the Capitol rotunda for Brian Sicknick, yield the political results they desire, no questions asked? Pelosi, after repeated promises to form a bipartisan 9/11-style commission to investigate the Capitol breach, has been slow-walking the threat. The House Speaker now is working with Rep. John Katko (R-N.Y.), one of 10 GOP congressmen who voted to impeach Trump in February, to negotiate the commission’s membership and objectives.

Regardless of whether any performative 9/11-style inquisition comes to fruition, it’s encouraging—albeit past time—to see Republicans challenge the destructive and intentionally dishonest account of January 6. “The narrative needs to be cleaned up,” Rep. Jody Hice (R-Ga.) said Wednesday. “The truth matters.”

Sicknick died from a stroke hours after everything settled down.

Four of the five who died that day were Trump supporters. The fifth was a Capitol Hill police officer who apparently also supported Donald Trump. Why is this relevant? Of course, the political views of the deceased shouldn’t matter, but unfortunately, in this case, they do. Rep. Alexandria Ocasio-Cortez, D-N.Y., and many other elected Democrats claim the mob was coming for them that day. Yet the only recorded casualties on Jan. 6 were people who voted for Donald Trump.

The first among them was a 34-year-old woman from Georgia called Rosanne Boyland. Authorities initially announced that Boyland died of a “medical emergency”.

The second casualty was 55-year-old Kevin Greeson, who died of heart failure while talking to his wife on a cell phone outside the Capitol. “Kevin had a history of high blood pressure,” his wife later said, “and in the midst of the excitement, suffered a heart attack.”

The third was 50-year-old Benjamin Phillips of Ringtown, Pa. Phillips was a Trump supporter who organized a bus trip to Washington for the rally that day. He died of a stroke on the grounds of the Capitol. There is no evidence that Phillips rioted or was injured by rioters or even went inside the Capitol building.

The fourth person to die, the only one from intentional violence, was 35-year-old Ashli Babbitt, a military veteran from San Diego. Babbitt was wearing a Trump cape when she was shot to death by a Capitol Hill police lieutenant. Babbitt’s death was caught on video, so hers is the best-documented death that took place that day.

Meanwhile, the Dems encourage their Antifa and BLM thugs to rampage across the country without consequences.