The Left’s double standard on riots. 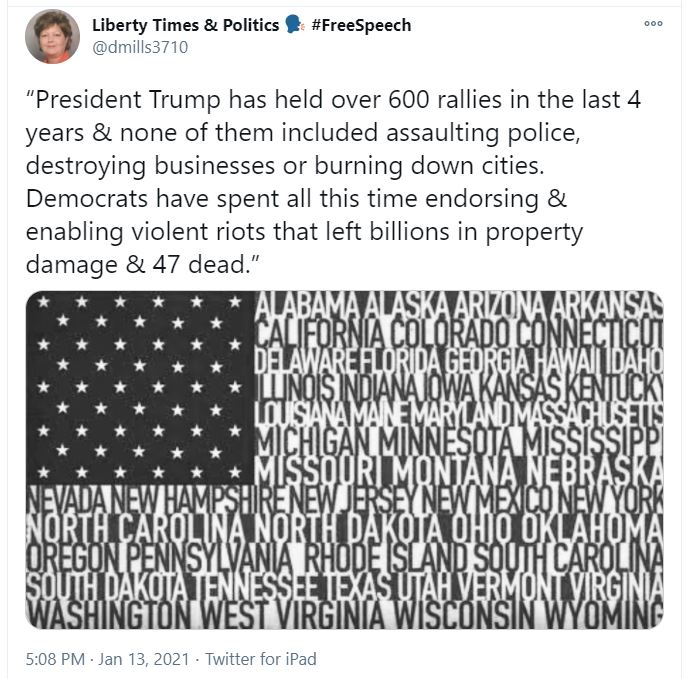 In 2011 when thousands of Democrats surged on the Wisconsin Capitol building in Madison and physically occupied it for more than two weeks we were told, “This is what democracy looks like.”
In 2016 when the Obama regime  was in charge and hundreds of BLM thugs blocked interstate highways and violently accosted and killed police, we were told, “To assign the actions of one person to an entire movement is dangerous and irresponsible.“
In 2018 during the Kavanaugh hearings when a mob of Democrats stormed the U.S. Supreme Court building in Washington, DC, and pounded their fists in rage on the door. We were told, “It’s understandable.”
When groups of Antifa and BLM anarchists rampage in the streets, set buildings on fire, loot businesses, assault, and even murder people,  we’re told, “These are mostly peaceful protests.”
When leftwing militants seized several blocks of the Capitol Hill neighborhood in downtown Seattle, declaring it an autonomous zone,
bringing guns, devastation, and death, we were told, “It’s a block party atmosphere.”
When a crazed mob gathered after the Republican National Convention and attacked Rand Paul,  we were told, “No justice, no peace.”
AOC led a group of protesters that stormed Pelosi’s office in 2018 for hours until Capitol Hill Police arrested 51 of the protesters for unlawful entry and protest; a stunt that was praised by the media.
When the police were told to stand down, governors refused to call in the national guard, and Democrats paid bail for violent protesters who were arrested, we were told, “This is the only way oppressed people can be heard.”
The mainstream media has been telling us for years that violence is the only way people who feel oppressed can be heard, it’s the only way to get justice, and “this is what democracy looks like”.
The inflammatory rhetoric of the Left caused this, and it’s about time Democrats and the mainstream media took responsibility for dividing Americans and attempting to humiliate those who support the President or any conservative ideals. They have pushed people to the brink, even while claiming, “It’s time for unity.”
Spare us your disingenuous outrage.

The 500,000 patriots at the Save America/Stop the Steal protest didn’t riot, murder, burn down buildings, assault, loot, and vandalize neighborhoods like the Dem-inspired Antifa and BLM thugs. They took their grievance straight to the source of corruption—Congress.

If they really wanted to breach the building, the entire Capitol would be leveled. Only a few got in. If you expect me to feel sorry for the triggered Dems or worry about a relatively mild breach of the capitol, as compared to the Antifa/BLM rampages, you are sadly mistaken.

Now that We the People are angry, you’re triggered with indignation.

There are two kinds of people in the country right now. Those who are gleeful over the crackdown on free speech and the impending Biden dystopia, and those who learn from history.