Dems are the worst security risk to America.

It was worse than we thought. It turns out that Hunter Biden’s drug enslavement, sex addiction, and penchant for Russkie hookers didn’t stop there. It was probably worse than his hinky “big guy” business deals, diamond “gifts,” and unearned Ukrainian paydays. There was a Chinese spy involved. Just like Democrat Eric Swalwell’s Fang Fang. 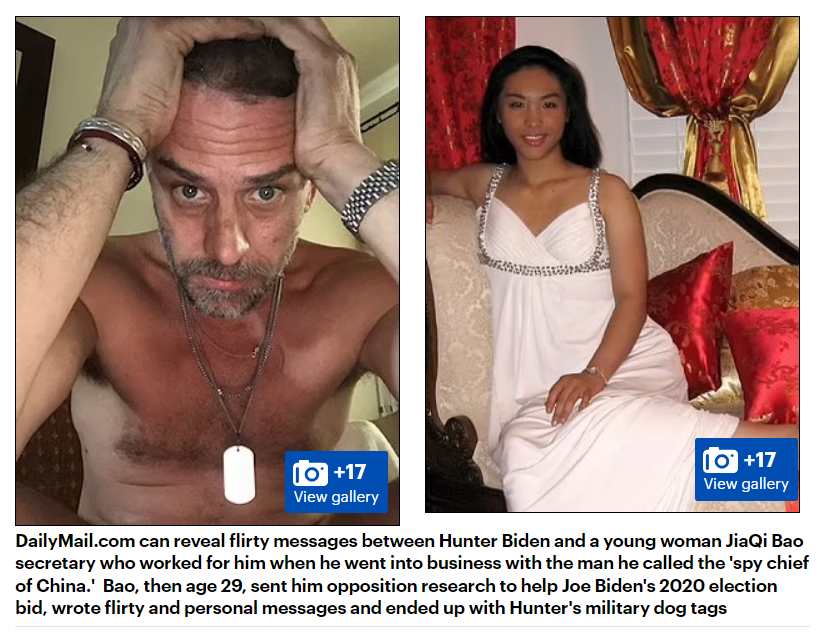 ……The Chinese-American “secretary” looks like a Kardashian. Hunter ate it up. So why are we just now appreciating the importance of a story about Hunter bedding a Chinese spy that broke more than a year ago in the London Daily Mail?  Well, now we have an FBI whistleblower who confirms it.

The Daily Caller reports that the House Oversight Committee member asked Watters, “Have you ever wanted to see a spy movie? You don’t even have to go to the theaters. Go to Washington, D.C., where Chinese spies just bait and hook gullible people in power.”

Comer continued, “sometimes all it takes is a honey trap. We saw it with Eric Swalwell who got caught sleeping with Fang Fang, the spy who stole his heart.“ And he told Watters that “Swalwell wasn’t the only person to have a Fang Fang in D.C. Turns out Hunter Biden may have dabbled with a Chinese spy, too. Her name is JiaQi Bao.”

JiaQi directed the then-vice president’s son to a scheme to “sell natural gas to China in 2017”–you know, as your secretary does. Bao reportedly told him “where the Chinese wanted to purchase the gas from,” according to The Daily Caller.

JiaQi also gave Hunter pointers on oppo-research for the “big guy’s” White House run. Sure, homegirl offered “opposition research for Joe’s White House run and encouraged him to draw funds from the company’s accounts when the joint venture collapsed……

The Daily Mail reported in May of 2021 that “flirty messages” on Hunter’s laptop — you know, the one those crack 50 national security experts said was “likely Russian disinformation” — confirmed that Hunter was holding his special “dog tags” for his “secretary” in his CEFC deal with his contact, a “spy chief of China.”

As Hunter put it in his flirty emails with his on-the-side honey, “your doggy chain necklace is waiting for you.” Since Hunter didn’t stay long enough in the military to shine his shoes, we can only imagine what kind of “doggy chain necklace” the pervert meant.

She told the vice president’s son in an email on his Russian disinformation laptop, “many thanks for having been the most amazing and understanding boss, and the most charismatic friend and coconspirator-in-mischief.”

But you do you, FBI, Kristen Clarke, and Merrick Garland. Go roll up those Catholic Dads who pray in front of abortion clinics and leave that subterfuge and spycraft to the experts at the Chinese Embassy. China’s in charge of the Biden White House.

A Senate probe highlighted links between Hunter’s Chinese backers and the country’s spy machine, and reported that his dealings with the Chinese ‘raise criminal financial, counterintelligence and extortion concerns’.

……Hunter and Joe Biden’s brother Jim partnered with CEFC in 2017, in a deal that was meant to generate billions of dollars and create a string of oil and gas projects in the Middle East and Europe.

But the joint venture collapsed the following year when CEFC’s secretary general Patrick Ho was arrested and later convicted of bribery in a US federal prosecution.

Ho was suspected of working with the Chinese intelligence services, and had been monitored by federal law enforcement under the Foreign Intelligence Surveillance Act, court documents revealed.

The Senate homeland security and finance committees issued a joint report in September 2020 scrutinizing Hunter’s business deal with CEFC, noting the company’s deep ties to the Chinese government and concluding that the millions of dollars transferred from the firm to Hunter and his uncle ‘raise criminal financial, counterintelligence and extortion concerns.’

…….Hunter himself seems to have believed his business partner’s ties to Chinese intelligence agencies – telling a friend in an audio recording on his laptop that Ho was the ‘spy chief of China’.

After partnering with Chinese oil giant CEFC in the multi-million-dollar deal, Bao was appointed as his secretary and assistant, acting as a go-between for his Chinese business partners, translating documents and performing clerical work for Hunter in the joint venture.

According to Bao’s LinkedIn page, she has worked as an analyst and assistant in finance and private equity in Hong Kong, Shanghai, Beijing and New York since 2011.

Her Chinese-American family are based in Arizona, and she studied at the state’s university before taking a masters at top Beijing university Tsinghua.

Her LinkedIn page does not mention CEFC or the joint venture with the Bidens, only listing ‘Hedge Fund / Asset Management / Financial Services’ as her job from February 2016 to July 2019.

……After the joint venture had dissolved, Bao emailed Hunter with a conspiratorial message encouraging him to help his father run for president and listing talking points to combat criticism of Hunter’s dealings with the Chinese.

Hunter Biden didn’t seem to be too concerned over the ties to the ‘spy chief of China’ because it didn’t affect his intentions.  Joe Biden knew all about the business deal.  In 2018, he called Hunter to discuss a New York Times article detailing Hunter’s partnership telling him, “I think you’re clear.”
Like Swalwell’s liaison with ChiCom spy ‘Fang Fang’ , Hunter Biden’s tryst isn’t getting any attention from the liberal media either.
Hunter Biden is a chip off the old Biden family block; a corrupt narcissistic crapweasel who doesn’t miss a chance to enrich himself even at the expense of national security.

Dems are pretty much  aligned with the ChiComs anyway, so there’s no real need to ‘spy’ on them. Sen. Dianne Feinstein’s office was infiltrated by a Chinese spy who worked as her driver and attended official functions on her behalf for 20 years. The Biden Family crime syndicate made millions off the ChiComs.

Dems have a habit of allowing foreign agents to infiltrate their party.