Fuck that ungrateful piece of shit. There are homeless veterans who don’t know where their next meal is coming from but this “refugee” is already joining the ranks of the entitled. Go back to Afghanistan.

An Afghan refugee who reportedly left “his family behind” in the now-Taliban-controlled nation of Afghanistan triggered a whirlwind of angry backlash on Twitter last Thursday after he posted a tweet that some perceived as ungrateful.

The still-up tweet contains a photo of the meal he’d been served free of charge at Fort Bliss in El Paso, Texas. What provoked anger was its caption.“Not complaining but this is what I got last night for dinner and the next meal is 12 hours later. Refugee life might be safe but never easy & favorable. Fort bliss El Paso Texas. #AfghanRefugees #afghanistan,” the caption reads. 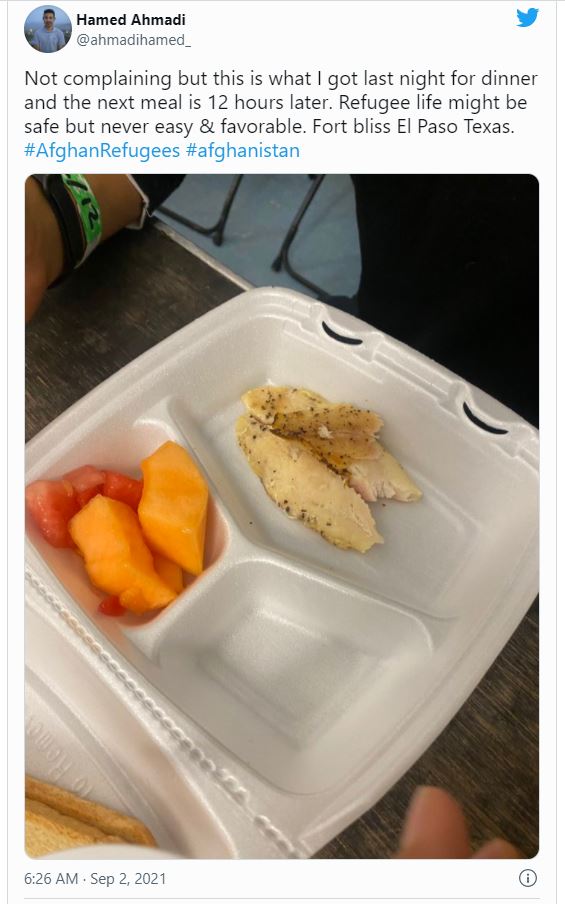 ……As of Sunday morning, the tweet boasted a 250 percent ratio and counting thanks to a flurry of enraged tweets blasting him for being so “spoiled” and “ungrateful.” 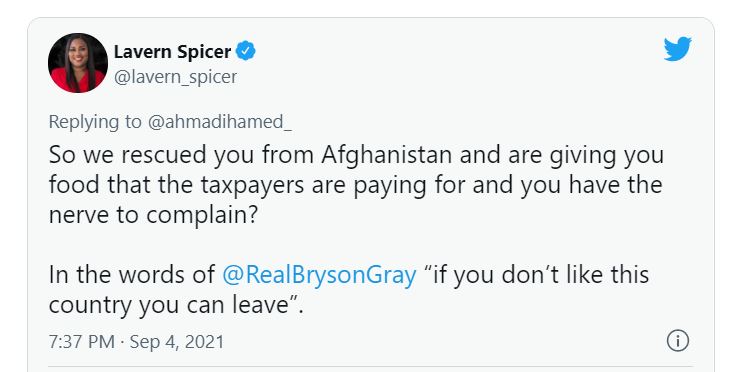 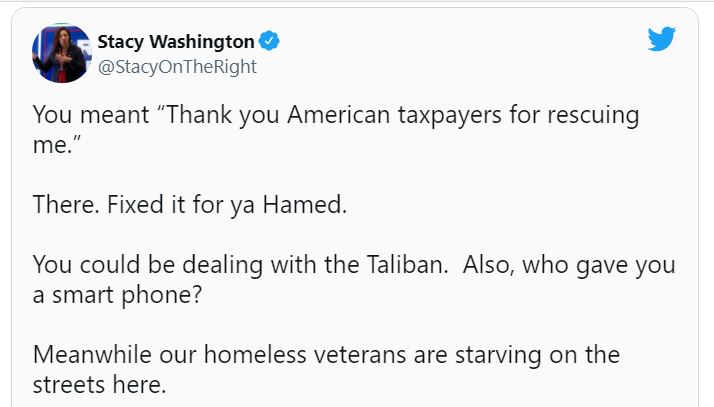 The public’s exasperation centered on the belief that Ahmadi’s fate would be significantly worse — he’d likely either be starving or dead — had he been among the tens of thousands of Afghan allies and hundreds of U.S. citizens who were abandoned in Afghanistan by the Biden administration.

……After his tweet went viral, Ahmadi only intensified the backlash against him by speaking with The Independent  for an interview and then tweeting the interview to the public. In speaking with the British outlet, he’d hoped to explain his tweet.

“The point of that tweet was not … to be complaining, to be very critical. I was just describing a situation of Afghan refugees that are in the situation that they never really wanted to be in,” he told the outlet.

“I had a pretty good job back in Kabul. I had a decent life. I had my family. I was forced to flee Afghanistan … if I had more space [on Twitter], I would have added more explanation – because I wanted to say that this is the refugee life. And we need to be patient.”

……Still, this discovery provoked even more anger, with critics asking him why he didn’t remain in Afghanistan to, at the very least, fight for his family, if not his country as well. 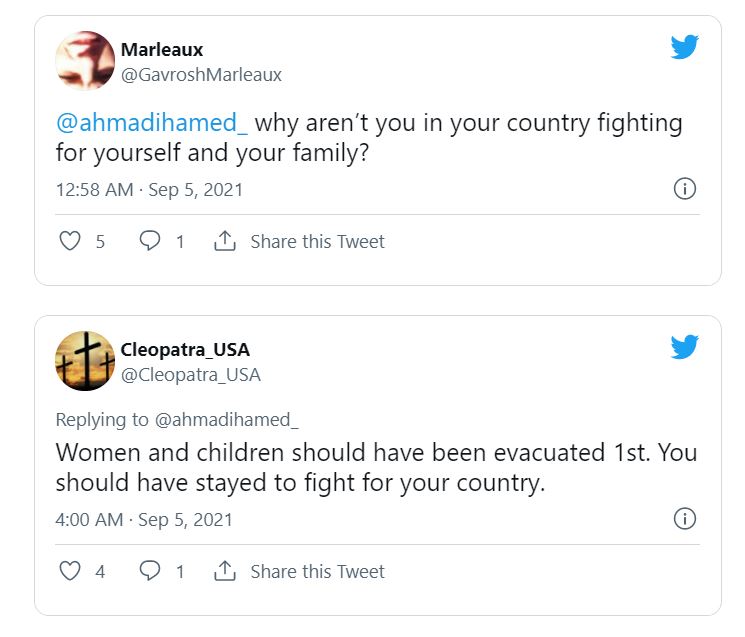 This is the little asshole: 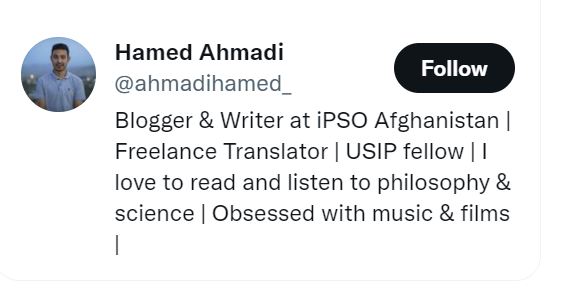 ……for some inexplicable reason, refugees to the United States have indeed had a history of showing ingratitude for the privilege of being allowed to resettle in America.

The most glaring example is that of Minnesota Rep. Ilhan Omar, who began complaining about the country the moment she stepped foot on U.S. soil back in the 1990s.

The then-just-elected congresswoman revealed four years ago that during the refugee orientation process, she’d been shown a video that depicted “happy families, and dinner tables where there is an abundance of food, images of happy young children running off to their school buses … images of a country where people are happy and leading a life that is prosperous.”

But when her family arrived in the states, she’d discovered that, much like every other country on Earth, America has its own fair share of homeless, particularly in big metropolitans. And that discovery, according to her, meant that America is apparently trash.

“I saw panhandlers on the side of the streets, there being trash everywhere, and graffiti on the side of the walls. I remember turning to my father and saying, ‘Well, this doesn’t look like the America you promised!” she recalled  in 2018.

Decades later, some worry that this same bizarre ingratitude is now beginning to surface among Afghan refugees as well.

The ingrate is associated with USIP (U.S. Institute of Peace) and IPSO (International Psychosocial Organization), two organizations that are entrenched in leftie philosophy.

His Linked In profile: 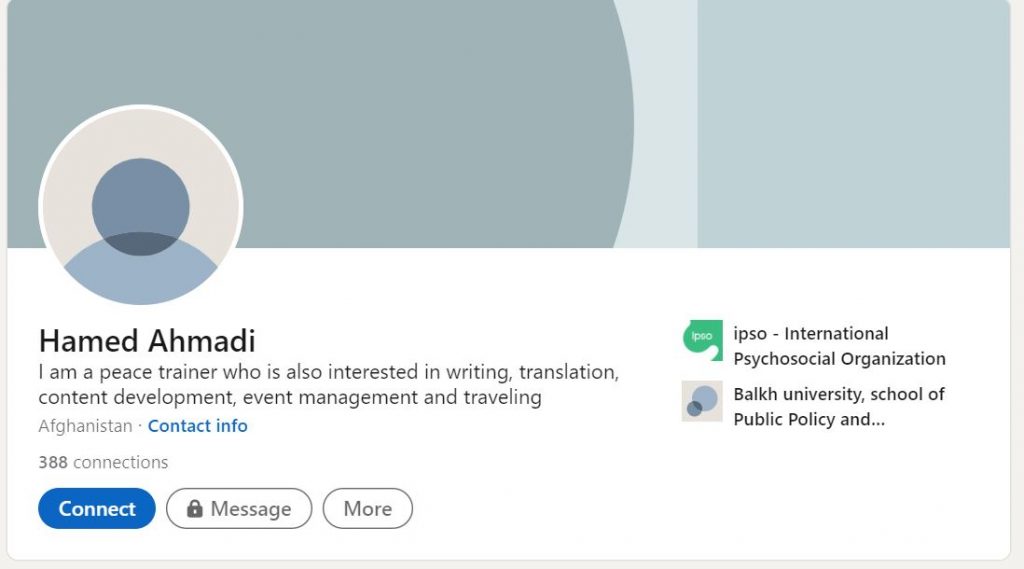 “Peace trainer”. LMAO. Too bad he didn’t have much influence over the muzzie terrorist thugs who are back in charge of his country. 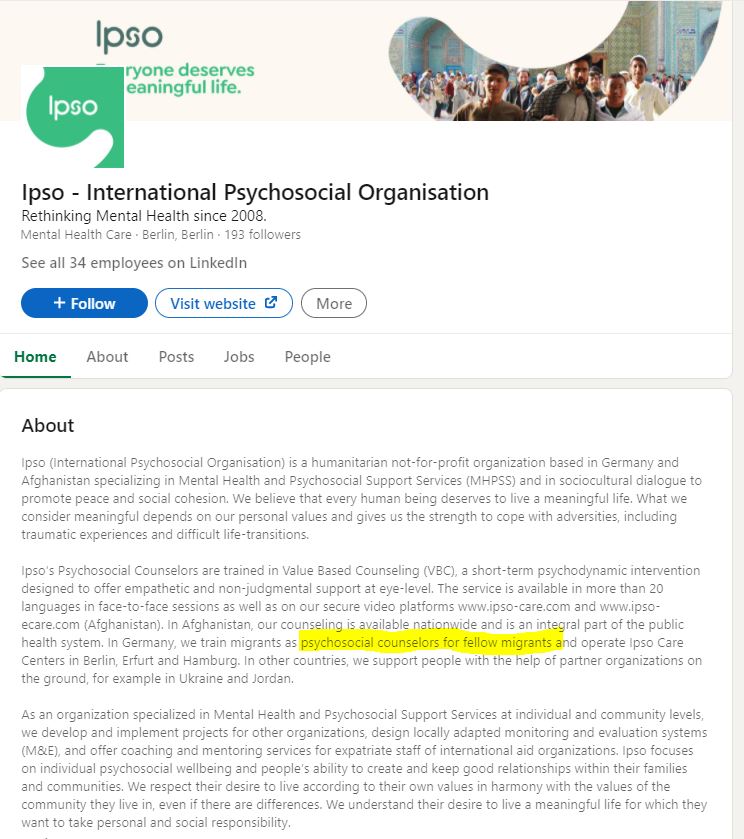 He’s arriving in this country with the hordes of muzzie “refugees”. What a coincidence. He’s got a job all lined up. I wonder who arranged his trip.