Kiwi Farms, a forum that’s long been accused of fostering targeted online and real-world harassment campaigns, says that someone hacked its proxy service and website. As noted by cybersecurity researcher Kevin Beaumont, it told users in a Telegram message that all avatars had been changed to the logo of another website (said to be another purported “free speech” forum) and that “each node on the forum index was deleted one at a time.”

While Kiwi Farms apparently has backups and none of the forum data has been permanently deleted, users’ personal information may have been compromised. Founder Joshua Moon told users to assume that their email and password information has been obtained, as well as the IP address of any device they’ve used to access Kiwi Farms in the last month.

……Moon added that he would restore the site from a backup, but noted that the process (as well as reviewing Kiwi Farms’ security procedures) would take some time. However, he noted on Telegram today that he had to leave for a week to deal with a family emergency. Some Kiwi Farms users are turning on Moon over the incident. 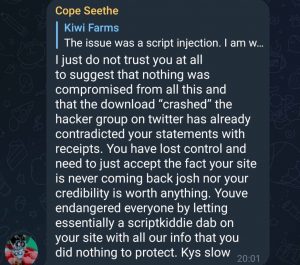 Earlier this month, Kiwi Farms was effectively forced off of the open web following an effort to take down the forum….. While Moon was later able to bring the forum back online through other means.

Cloudflare, a DDoS protection company, kicked Kiwi Farms off its service due to a significant increase in targeted threats originating on the site. That seems to have played a role in this weekend’s hack. “Cloudflare not only provided DDoS protection, they also accounted for many popular exploits like this,” Moon wrote.

The pressure to revoke services to the website began after one popular Twitch streamer and trans-rights activist, Clara “Keffals” Sorrenti — born Lucas Roberts — blamed Kiwi Farms for “doxxing” and posting personal information about them. Sorrenti is a Canadian transgender Twitch streamer who gained attention online after claiming credit for getting the leftist streamer Destiny banned from Twitch for comments about transgender athletes.

Sorrenti was previously involved in Canadian politics, running in the 2018 Ontario general election and the 2019 Canadian federal election as part of the Communist Party of Canada. Kiwi Farms tracked Sorrenti’s online activities and public information, including his association with a Twitter user named Chloe (@BobPosting) who alleged to have provided minors with unlicensed hormone replacement therapy. In one screenshot of a Discord chat, @BobPosting states “I have unironically pinkpilled like half a dozen minors. And by pinkpill I mean uh point them to HRT resources after they reach out.”

……Sorrenti alleged that he was swatted at his home in Canada after someone impersonated him and sent fraudulent emails to politicians threatening to harm “every cisgender person” at city hall. Following the incident, Sorrenti stated that he had left Canada to stay with friends in Northern Ireland.

……Shortly after Sorrenti’s swatting, his followers began putting pressure on Cloudflare to remove service to Kiwi Farms and leave the site open to DDOS attacks, effectively taking the site offline. 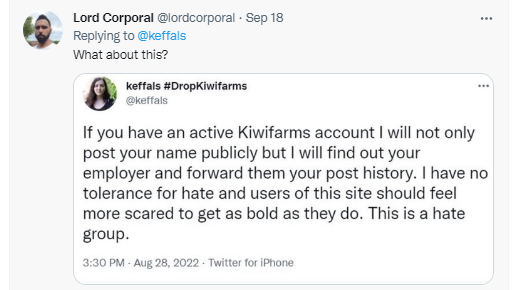 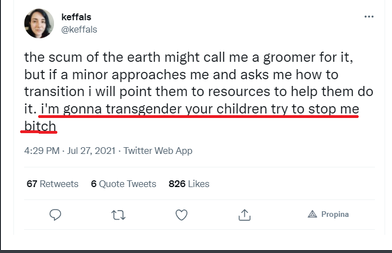 ……The vast majority of the KiwiFarms thread on Keffals consisted simply of archives of his own public statements and actions.

Beginning in August, Keffals decided to lead a mob of transsexuals and other weird online denizens in besieging KiwiFarms and its web infrastructure and website security company, Cloudflare. For those not in the know, Cloudflare is one of the most important companies in keeping websites online by thwarting distributed denial-of-service (DDoS), attacks whereby hackers shut down websites by flooding them with a massive tsunami of artificial traffic, overwhelming their servers and bandwidth. Cloudflare maintains a near-total monopoly on DDoS-mitigation services.

Keffals and his weird tranny army began bombarding Cloudflare execs on Twitter with angry tweets. Instead of ignoring the mob of angry communist trannies, Cloudflare CEO Matthew Prince released a statement on August 31 explaining that his company would not deny service to any of its clients for political reasons. Prince did not name KiwiFarms specifically, but clearly referenced them by implication — an action borne of weakness that signaled the beginning of the end for KiwiFarms.

After the statement was released, the communist tranny mob decided to escalate and play their ace in the hole: Ben Collins of NBC News.

……On Friday, Sept. 2, Collins swooped in with an NBC piece openly calculated to get KiwiFarms annihilated by Cloudflare.

Collins paired his article with a Twitter threat where he sounds more like an Antifa spokesman than a reporter.

In his hagiography, Collins allows Keffals to uncritically use a favorite buzzword of the liberal establishment: “stochastic terror”…. The term refers to the liberal belief that anytime they are criticized in a public forum, it is terrorism.

……Because if criticism of a liberal online or in the newspaper is read by thousands or millions, then one single deranged, schizophrenic, or mentally unbalanced person could send that poor liberal a death threat, or worse.

If the concept of “stochastic terrorism” was taken seriously, the logical consequence would mean a total shutdown of the public square. But of course, the Globalist American Empire would only enforce such a regime on the political right. So, like most everything else left-liberals propose nowadays, an anti-“stochastic terror” regime would lead, in their minds, to a Bolshevik utopia where only communist trannies like “Keffals” could use the public square.

……Within a day of Collins’ article going live, Cloudflare cut KiwiFarms off from its services, citing “an unprecedented emergency and immediate threat to human life” created by the site’s mere existence.  This “unprecedented emergency” was almost certainly a lame false flag threat that was swiftly deleted, but that hardly mattered.

……In another Telegram post on Sept. 18, KiwiFarms announced that a hacker had penetrated an admin account and potentially taken the passwords, emails, and IP addresses of every single user on the site. To wit: the entire purpose of the deplatforming campaign against KiwiFarms was to enable a criminal assault on KiwiFarms. That criminal assault, aided and abetted by Ben Collins and NBC News, appears to have been a complete success.

To paraphrase a fake quote from Sinclair Lewis: fascism has come to America wrapped in a transgender flag and carrying a dilator.

……Was KiwiFarms always in the right? Not necessarily. Often, the site and its users were outright repugnant. The site’s users often gratuitously shamed and harassed various Internet personalities (not all of whom deserved it), and users of the site struggled to differentiate between figures who were actively dangerous and those who were merely pathetic. The site’s ridicule of certain “lolcows” (individuals subject to mockery) often continued long after the joke had worn out its welcome. Plus, as could be predicted for any site with lightly-moderated, user-generated content, not everything posted there was accurate or fully proven.

……Clearly, the banning of KiwiFarms is significant for every American, and every single person on this planet, who cares about online freedom of speech and freedom of expression. It matters even if one finds the site and its users utterly loathsome. It matters because it demonstrates the left’s playbook for all to see, and it matters because it shows how the cutting edge of the modern regime works.

KiwiFarms’ defenestration wasn’t simply carried out by run-of-the-mill transsexuals. This act of tyranny was carried out by the most disturbed subgroup among them, a grotesque assortment of forum monsters, child groomers, pornographers, scammers, communists, and sociopaths. It is these people that the left has enthroned as the supreme arbiters of acceptable speech and ideas; a tyrannical minority who can veto anyone they please out of existence. They are the ones who can mount $10,000/day DDOS attacks with the tacit permission of the government and tech, while people like you aren’t allowed to have a Twitter handle or a PayPal account.

The Republic of Liberty is dead, and in its place we have the Tyranny of Pedophiles. Enjoy your stay.

Oh, and he still lives with his mommy.

Moon’s site regularly engaged in doxxing and Swatting.  However, that criminal behavior is not what brought the site down.  It was a tranny throwing a hissy fit followed by the complicity of internet companies to appease their hurt feelz.

There was at least one bright spot during Moon’s tenure. He flat out told the New Zealand cops to get fucked when they tried to glean his site for information over Brenton Tarrant.

Neither Moon nor ‘Keffals’ has any redeeming human value. Both are vile, abhorrent shitstains that share the same perversions and schizoid traits.

In spite of the repulsive speech that dominated KiwiFarms, the site should have the same 1st Amendment rights as the leftwing forums that spew their own brand of hate, bigotry, and violence.