The irony is totally lost on them.

Pepe the Frog originated as a character from the comic series Boy’s Club by Matt Furie. On 4chan, various illustrations of the frog creature have been used as reaction faces, including Feels Good Man, Sad Frog, Angry Pepe, Smug Frog and Well Meme’d.

It really took off after President Trump tweeted a likeness of Pepe in his image: 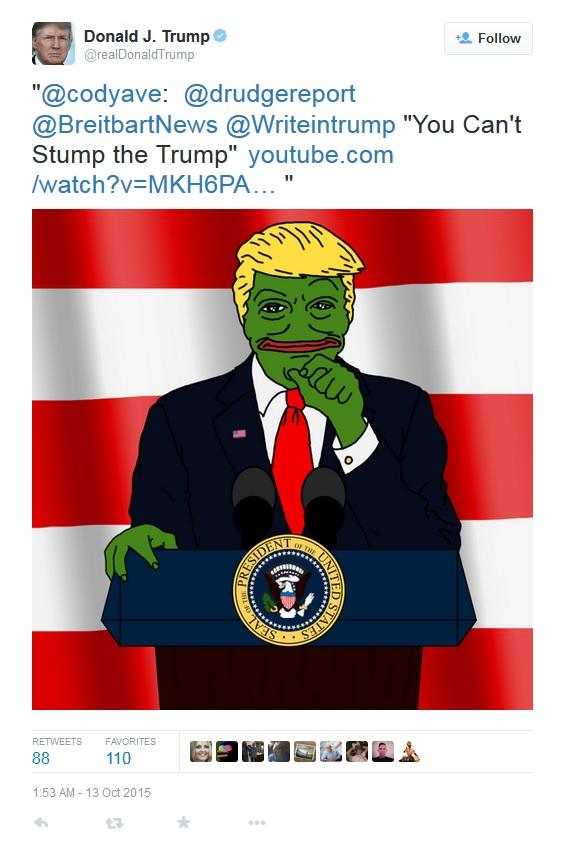 After that, the leftwingnuts at the ADL declared that it was a “symbol of hate” used by “alt right” and “white supremacists”.

The Left is real easy to rattle. All you have to do is come up with a snarky meme with a character that humiliates their idiocy, squashes their politics, or depicts their vacuous intellect, and they’re provoked into grand mal seizures.

Note the response to the NPC (Non-Playing Character) meme:

After the meme began to spread, Twitter user @brightabyss accused those who “refer to living humans being as NPCs” as being “facist””

And according to KnowYourMeme, “On September 15th, Twitter user @DreddByDawn tweeted that NPC was “dog whistle” used by “fascists.” The same day, Twitter user @Sharessan accused a centrist of being a “fascist in denial” after labeling them an NPC.  Meanwhile, Twitter user @stackflow33 tweeted a screenshot of the tweets along with the message “What the fuck is even going on anymore? Lmao.””

Angry NPCs Twitter users continued their opposition to the meme, telling users to “report and block” anyone using the “dehumanizing” NPC meme.

KiwiFarms refers to these squalling retards as ‘lolcows‘; people and groups whose eccentric or foolish behavior can be “milked” for amusement and laughs.

Some of them resort to the usual thuggish violence and public displays of mental breakdowns, when they see MAGA hats.

The SJWs need cry closets and safe spaces to hide from scary ideas and viewpoints that challenge their opinions.

In the meantime, we’ll just keep the triggers ready.