This shit would get you banned from social media and fired from your job if you are a conservative.

Daily Beast, The Atlantic, Rolling Stone and NBC contributor Thor Benson bragged on Twitter last night after he harassed an Asian man at a bar in New Orleans.

Thor Benson thought the Asian-looking man was Andy Ngo. So he went up and told him he was a “garbage person.”

The Asian man was not Andy Ngo. But the man was frightened and fled the bar.

Thor Benson, a writer for a variety of left-wing media outlets, including The Daily Beast, The Atlantic, Rolling Stone, NBC News, and Business Insider, mistakenly believed he had encountered The Post Millennial‘s editor-at-large Andy Ngo in a bar in New Orleans and harassed the Asian man until he left.

“I just ran into Andy Ngo at a bar in New Orleans,” Benson reported to Twitter. “I politely told him he’s a ‘garbage person.’ Lol.” The man was not Andy Ngo.

Ngo, a Portland, Oregon, native, was not even in New Orleans, nor Louisiana, at the time Benson approached the stranger and harassed him until he left.
Ngo reached out on Twitter to ask The Daily Beast‘s editor-in-chief Tracy Connor if she supports their contributor harassing strangers in bars simply because that contributor mistakes them for someone else.  Connor also could not answer the question of whether or not she thinks Benson would have been correct to harass the man had he been Ngo.

This is the soy boy who harasses Asian men. 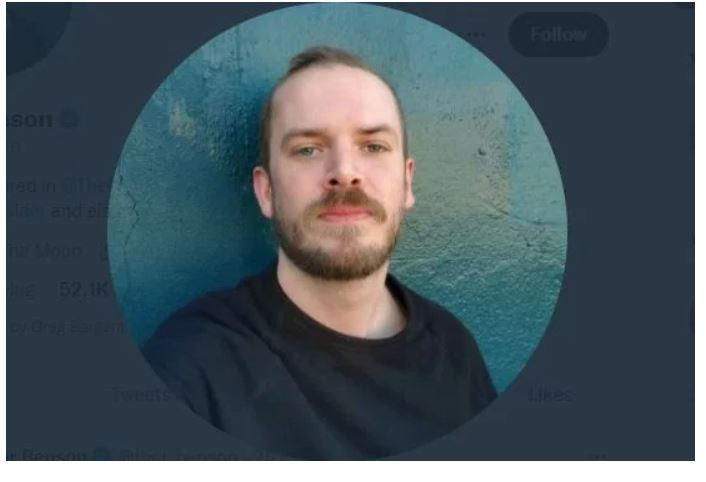 But President Trump’s tweets were so mean.

Conservative writer Andy Ngo is a  journalist & author of NYT bestseller, ‘Unmasked.’ He’s also an editor at the Post Millennial. He regularly writes about Antifa and BLM, exposing their lunacy, violence, and far-Left/anarchist ideology.

He’s also been physically attacked by the thugs he investigates.

Benson is an unhinged leftie shitbag who thinks all Asian men look alike.

He tried to double down. Bad idea. 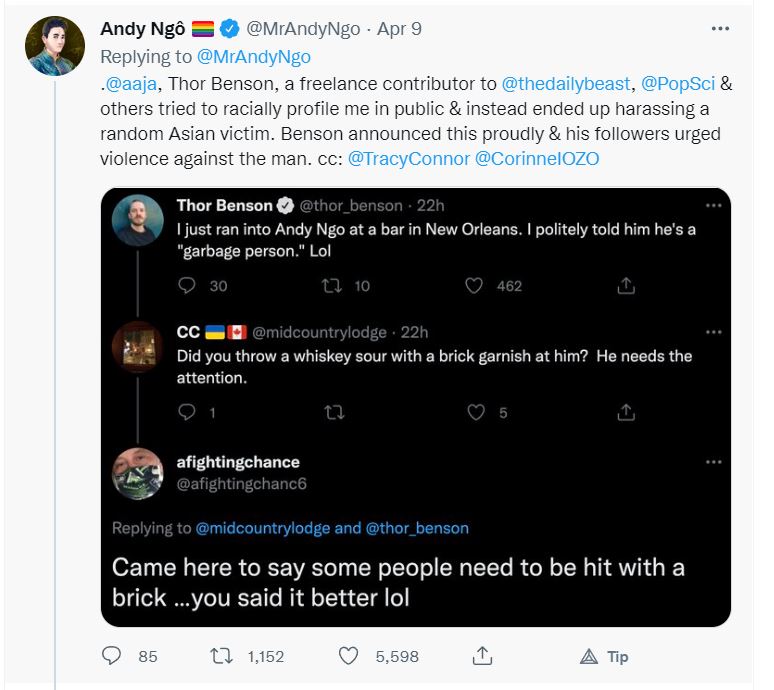 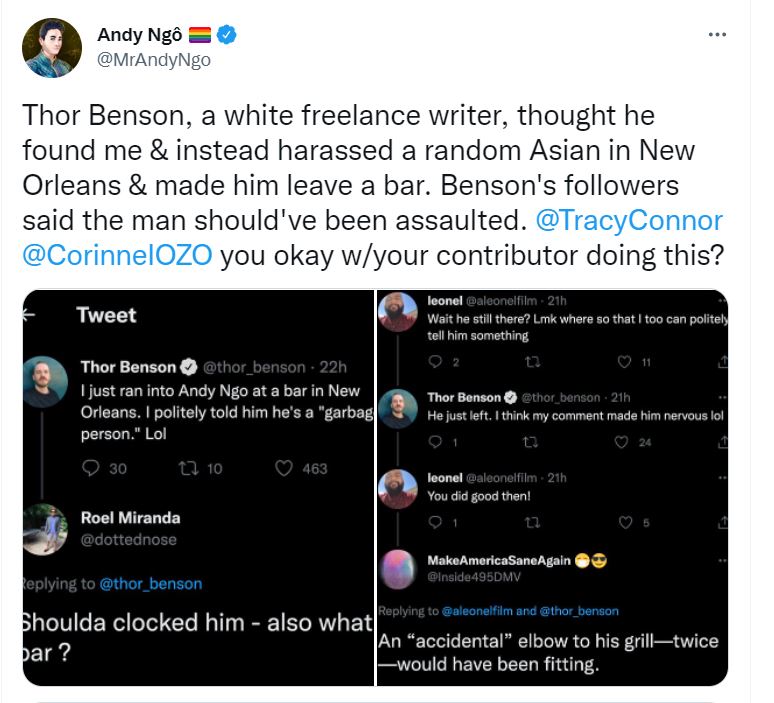 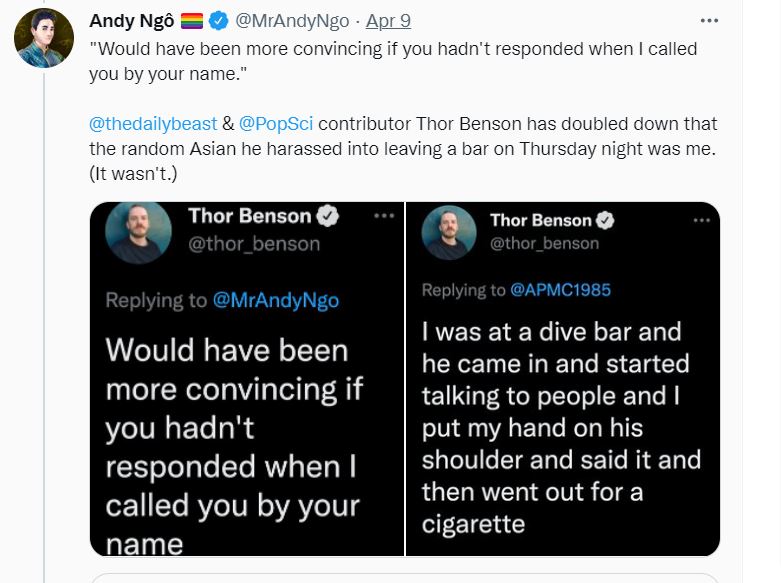 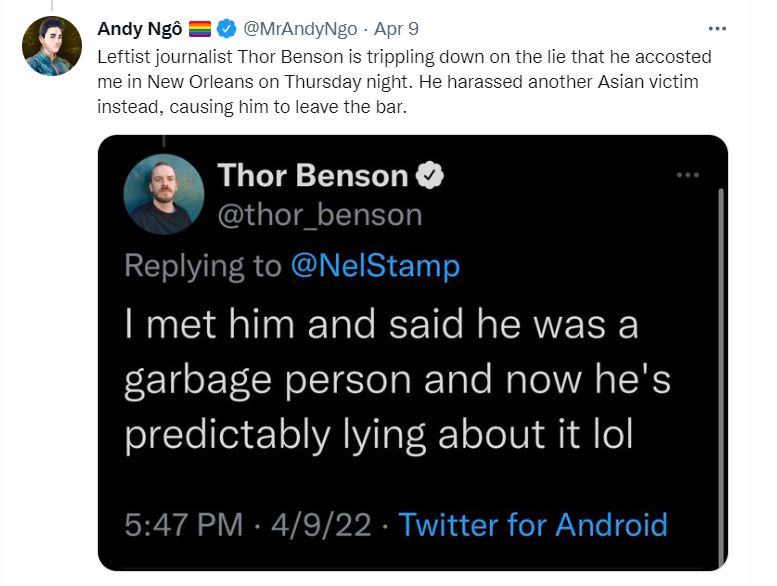 So, this vile little twat mistakes another Asian guy for Ngo, and won’t own up to it. 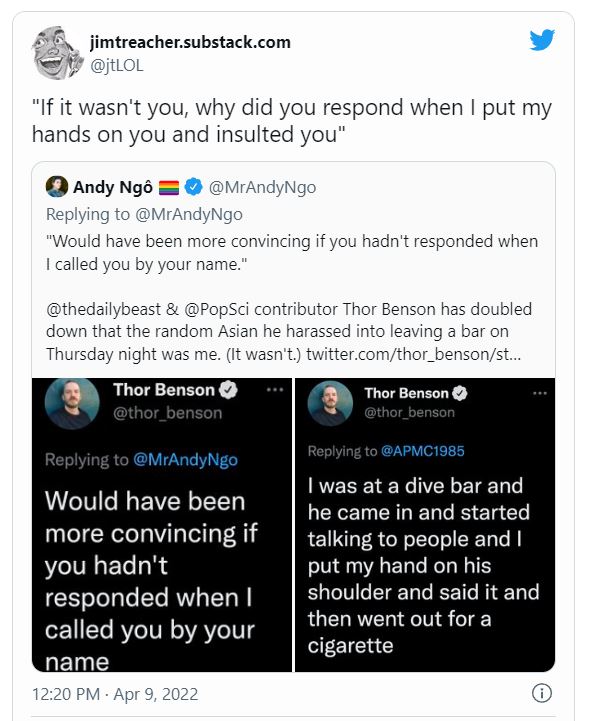 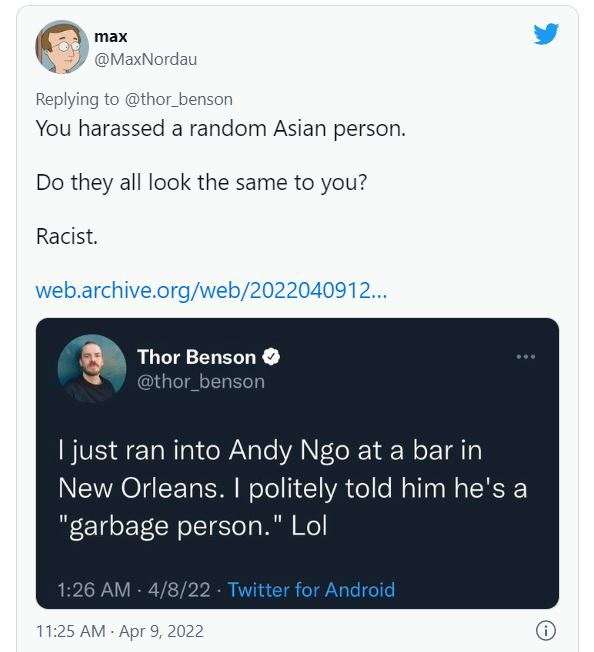 Maybe Benson was just drunk at the time and made it all up: 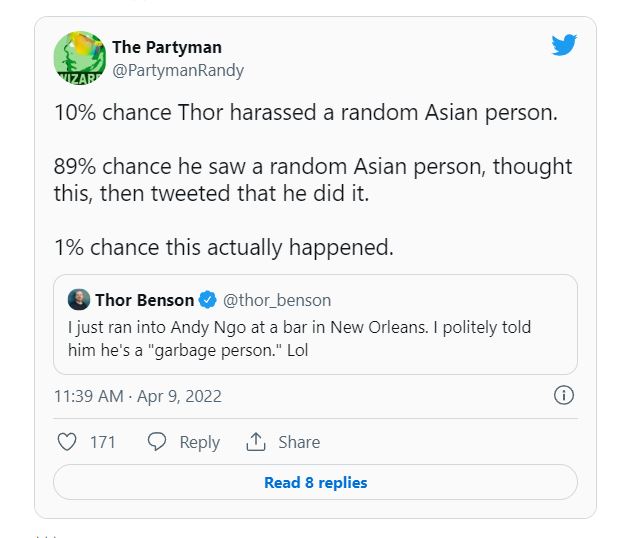