Victoria White is a single mother of four daughters who volunteered with the Trump Victory campaign, helps organize Back the Blue and 9/11 memorial events — and is now an “insurrectionist” according to the liberal media.

White traveled to DC from her home in Rochester, Minnesota on January 6th to listen to then-President Donald Trump speak, before finding herself in the midst of chaos that will forever change her life.

Following Trump’s speech, White made her way to the Capitol along with the crowd of thousands. As things began to spiral, she found herself stopping two people from breaking a window, demanding that doing so would be unpatriotic and wrong.

White maintains that she did not vandalize or hurt anyone, quite the opposite, as she says she was trying to prevent that.
In the FBI’s own report, they note that there is a video in which “an individual who appears to be WHITE (wearing the same red cap and black coat as seen on WHITE’s Facebook page) is seen arguing with other rioters who were attempting to break the glass. In the video, WHITE can be heard yelling at the individuals attempting to break the glass and she physically attempts to pull them away from the glass. A sample of screenshots from that video are shown below. WHITE is circled in red.” 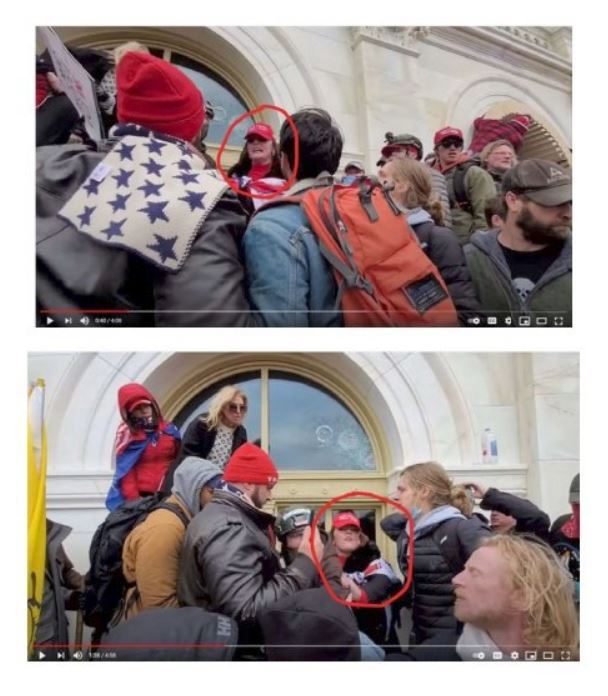 “I tried to stop those two people from breaking the Capitol window because when we go to see the president, we don’t go there to do stuff like that. That’s not patriotic. We don’t do that,” White told the Gateway Pundit.

According to her charging documents, the FBI is claiming that White had attempted to grab an officer’s shield. Their big smoking gun against her, she says, was actually just an attempt to protect herself from getting hit with it or forced into it by the crowd — not trying to hurt anyone.

The hectic scene led to an officer striking White in the head with a metal baton. She responded by reminding the officer that he took an oath to the Constitution and that what he was doing was uncalled for. The officer, White says, responded by calling her a “b-tch” and hitting her again, and again. The third strike caused her to bleed from her head.

On Thursday, April 8, her home was surrounded by federal agents and she was arrested — while her daughters were home. White was released shortly after, but cannot leave the state until her trial. She is charged with six offenses that combined, carry a maximum sentence of 55 years in prison.

Figures. The Capitol cop who murdered Ashli Babbitt got away with that too.

Burn Loot Murder lasted 7 months with 23 people s­hot dead, 700 police officers injured, and over 150 federal buildings damaged. Antifa’s rampage has resulted in damage comparable to Hurricane Sally. Combined casualties from both groups of thugs numbered 926 as of July 2020.  None of their homes have been raided. The Feds refuse to prosecute.  But the guy who videoed Ashli Babbitt’s murder is being held in jail without due process.  If you have any doubt that there’s a two-tiered system of justice in America, this should clear things up.

Weaponized government agencies are breaking the law and violating the constitution with impunity. This country is being turned into a Banana Republic.

Dems are perfectly okay with American businesses being burned to the ground and destroyed since they’re anti-capitalist and pro-Communist. But don’t you dare attack their hallowed halls of government corruption.

If they push us too far, there will be another revolution that will make 1776 look like a minor scuffle.