The Feds raided Alissa’s family home after the massacre:

State and federal agents have searched the seven-bedroom Colorado home of accused mass shooter Ahmad Al Aliwi Alissa on a quiet suburban street — which neighbors told The Post descended into chaos after his “disruptive” family moved in over three years ago.

Residents of the residential street in Arvada say they had a rude awakening around 3 a.m. Tuesday, hours before their 21-year-old Syrian-born neighbor was publicly named as the suspect in Monday’s slaughter of 10 at a King Soopers store about 30 miles away in Boulder.

……Agents of the Colorado Bureau of Investigation (CBI) were later photographed visiting the Alissa family home around 3 p.m. Tuesday, staying inside for around 90 minutes, according to neighbors.

It was the start of a nightmare for others living on the then-quiet street — with some so upset at “harassment” by the large Syrian family that they pulled up stakes and moved away, neighbors said.

“They harassed several neighbors. Caused two neighbors to move,” Dawn Losasso, who has lived on the block in the “tight-knit neighborhood” for 25 years, told The Post.

“You see lots of people going in and out of that house at all hours, especially late at night,” she said — but she didn’t see the 21-year-old alleged killer “often.”

Bresina said the “erratic, chaotic” arrival of the Alissas eventually left many on the street “pissed at the neighbors who sold to them.”

“We’ve had problems with them,” he told The Post, calling the family a “real chaotic, disruptive addition to the neighborhood.”

Oh, and he’s a rabid anti-Trump and pro-illegal alien shitbag, as well.

DENVER — Police in Boulder, Colorado on Tuesday, revealed the identity of the 21-year-old suspect in custody, Ahmad Al Aliwi Alissa, charged with 10 counts of first-degree murder over a shooting at an area King Soopers grocery story which left 10 people dead including a police officer.

Alissa, according to Facebook posts reviewed by the Daily Beast before they were taken down, was an anti-Trump Muslim who posted about Islam, prayer, and holidays, in addition to opposing gay marriage and former President Donald Trump’s policies on immigration.

Alissa’s 34-year-old brother, Ali Aliwi Alissa, told the Daily Beast the primary suspect in the Monday shooting was mentally disturbed and paranoid. In high school, Ali Aliwi told the paper, Alissa was “very anti-social” and described “being chased” as if “someone is behind him, someone is looking for him.”

“When he was having lunch with my sister in a restaurant, he said, ‘People are in the parking lot, they are looking for me.’ She went out, and there was no one. We didn’t know what was going on in his head,” Ali Aliwi told the magazine.

Other family members, Ali Aliwi said, were detained by police after the Monday shooting.

Alissa was captured on camera taken into custody Monday afternoon shirtless with what appeared to be blood running down his leg. Another suspect was escorted out of the market with his hands raised, no handcuffs. 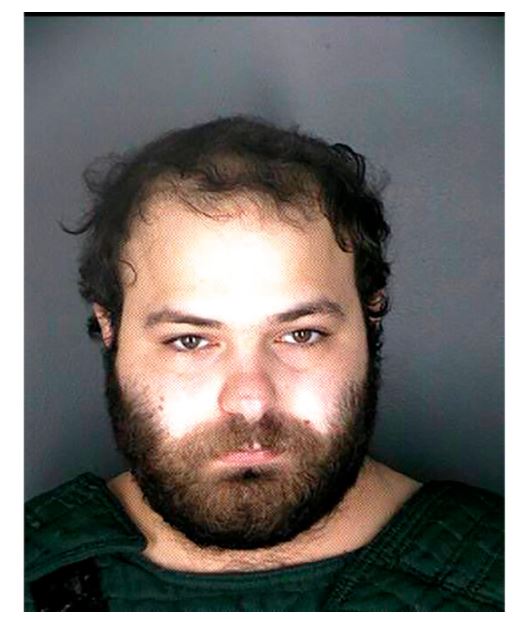 These were the posts that the rancid towel head published on Facebook before Zuck’s minions deleted them: 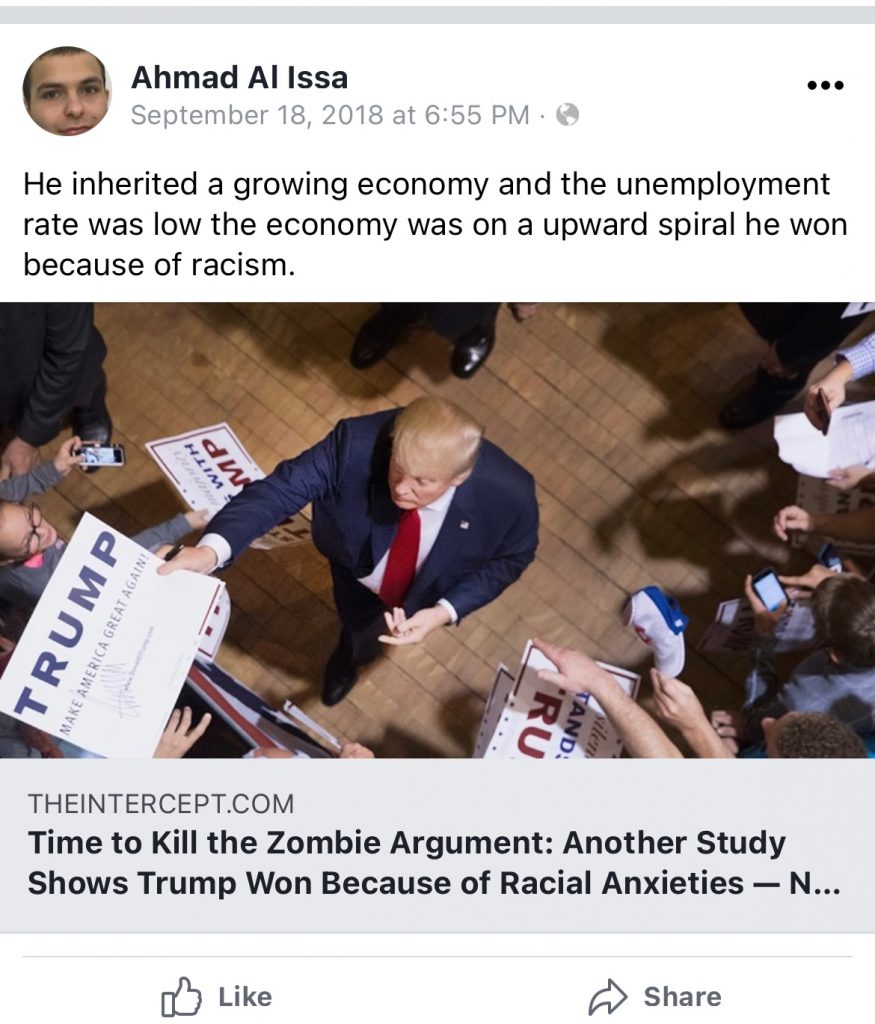 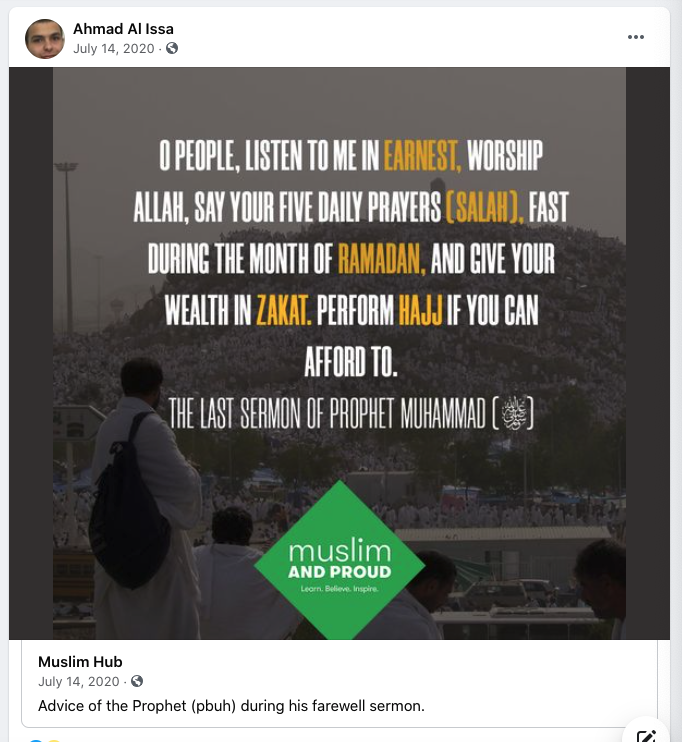 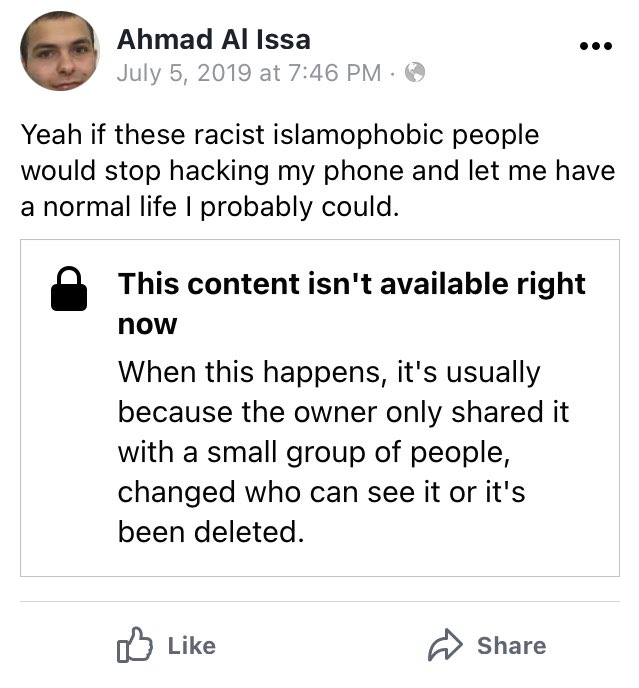 Of course, one of the resident muzzies in Congress gave her 2 cents:

Really? Funny how muzzie scrunts like you don’t have much to say when the shooter is black, Hispanic, or as in this case, a raving ass-lifter.  This is the same turban-head who described 9/11 as “Some people did something“.  She’s also openly anti-Semitic.

The anti-White Leftwingnuts had to scramble to delete all of their Tweets and comments when they realized the shooter wasn’t a “white supremacist”.

Take a good look at the faces of the victims. 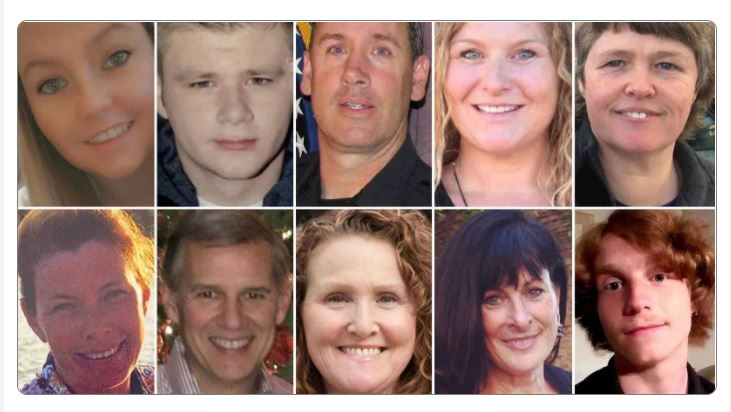 Maybe the bloviating leftwing assholes can explain to their families how disappointing it is that the shooter wasn’t a “white man”.

In the wake of the Monday night shooting at a grocery store in Colorado, the woke left immediately took to social media to proclaim the shooter as a “white man” and no doubt a “white supremacist.”

Had they just waited for the facts to come out, they would have learned that the shooting did not fit their preferred narrative, as the shooter has been identified as 21-year-old Ahmad Al Aliwi Alissa, a Muslim.

Now, so many have egg on their faces. 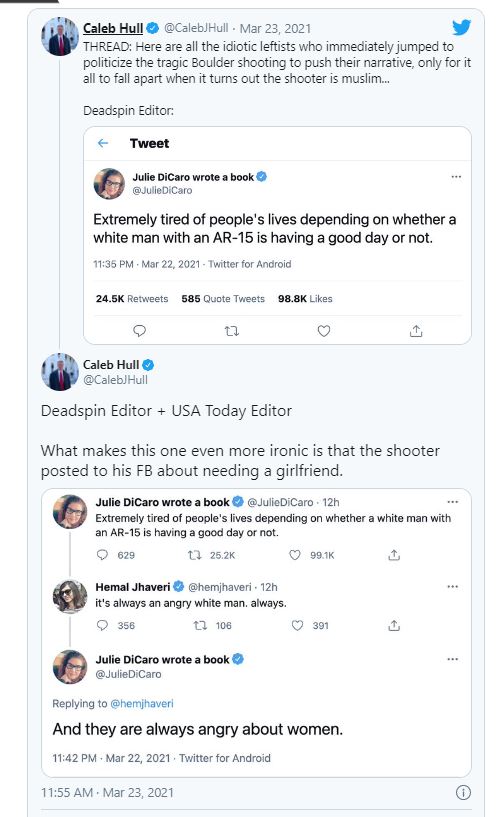 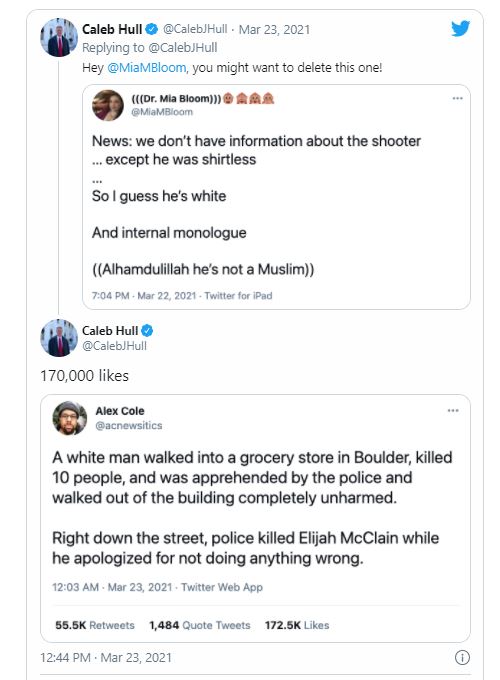 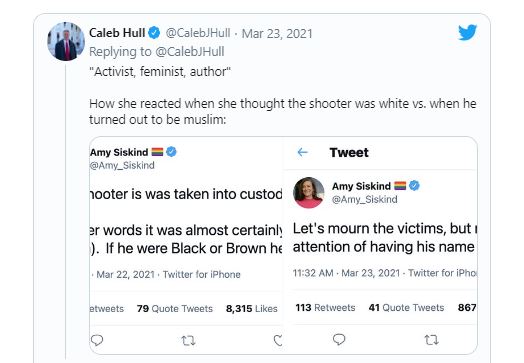 There are lots more, but you get the idea. The left’s narrative that the shooting was committed by a white man because of “white supremacy” was destroyed the moment the shooter was identified. Without a compelling anti-white narrative, one can’t help but wonder how much use the left will have for this story… except, of course, for the usual calls for gun control.

Perhaps the worst thing about this is the way these woke liberals saw a tragedy and immediately felt the need to craft a politically convenient narrative. Real lives were lost, and they couldn’t even stop hating on white people by default.

Kammy Harris’ niece posted this shit immediately after the shooting: 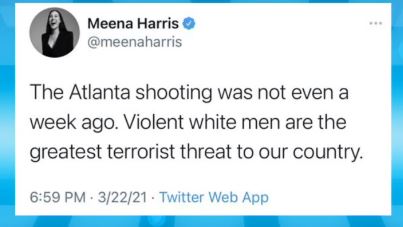 When the truth about the shooter came out, she simply applied her racism with a different tack:

Whenever the “white man” narrative fails, they resort to either blaming “lack of gun control” or mealymouthed bullshit that deflects from the real issue of who wielded the gun.  Mass shootings aren’t important to libs unless they can exploit a narrative.

Just two months ago, a black teenager, Raymond Childs, was charged with six charges of murder and one count of attempted murder. The victims were members of his own family—42-year-old father Raymond Childs, his mother Kezzie, 42, a 13-year-old sister Rita and his 18-year-old brother Elijah Childs.  Also killed were Elijah’s 19-year-old girlfriend Kiara Hawkins and their unborn child.

Not a fucking peep out of the perpetually outraged leftwing mob.  Violent atrocities not politically useful to the Left are ignored.

Most mass shooters have political affiliations that are not “white supremacist”. The fact is, that Dems, leftwing extremists, minorities, and Islamic zealots fill the ranks of mass shooters.

When Omar Mir Seddique Mateen strode into an Orlando gay bar and mowed down 53 people, the liberal media joined radical muzzie leaders in spinning the murders to fit their agenda.

After the requisite pissing and moaning about “guns”, this shit will disappear down the rabbit hole.