There is an immense correlation between mass shooters and their political affiliation being leftist/democrat:

The “Short List” of politically active liberal democrats who kill…

Lee Harvey Oswald – JFK Assassination – In 1959, Oswald traveled to Moscow in hopes of becoming a Soviet citizen. “I want citizenship because I am a communist and a worker,” he wrote in his request for citizenship.

Wackos Jared Loughner and Joseph Andrew Stack turned out to be deranged leftwingnuts.

……Mass shootings are a black thing.  And we find them almost every day.  Often more than one.  In Philadelphia alone, they report one every eleven days.

Let’s take a look at the headlines (with links) from a nine-day period ending Memorial Day, May 27.  One at a time, most recent day first, until we reach the 26th mass shooting from a black person.

1. “1 killed, 5 wounded as gunfire erupts in Trenton again days after 10 were hurt in shooting outside city bar.”

2. As the previous headline indicates, don’t confuse that mass shooting with “Police Confirm Nine Injuries in Trenton Shooting Incident” from Friday, the 25th of May.

4/5. “Six people, including teenagers shot in two separate incidents in Brooklyn.”  A twofer: three each.

Let’s check out the headlines and links from May 26. Spoiler alert: not a white person in sight.

8. “1 Dead, 3 Wounded After Shootout at Fort Lauderdale Parking Garage.”  Not to worry — his mom says he was acting in self-defense.

10. “5 people shot, 3 arrested at Brunswick.”  This is not even the worst one in Virginia last weekend.  So hold on.

11. “Four shot, one dead in Stockton.”  Some locals call Stockton the New Chicago.

12. Transgender woman, 2 men killed in Detroit shooting.  Not the first recent murder of a transgender.  Not polite to notice that those killers are black as well.

Compared to the big riot of 2016, where 120 policemen were sent to the hospital after being on the wrong end of bottles and bricks and other violence at the hands of thousands of black people, it is easier to understand why local media were so eager to brush it off as just a few kids blowing off some steam.

So far, nary a crazed MAGA hat–wearing Caucasian to be found.  Let’s continue to May 25.

17. “3 shot early Saturday near canal walk in Downtown Indianapolis.”  The record for mass shootings there is 8, achieved while the Black Expo was in full swing.

18. “One dead, nine injured after shooting at ‘large party’ in Chesapeake.”  This was the big enchilada in Virginia this week, near Norfolk.  Lots of video of the party at one of two videos I made about the recent mass shootings.  Lots of music about guns, drugs, money, b——, and murder, if that’s your thing.

19. “1 dead, 2 injured after shooting at popular lounge in Midtown” Atlanta.  You are probably going to the wrong lounges.

Headlines and links from May 22.

Let’s see some headlines and links from May 20.

22. “Suspect in custody identified after quadruple shooting near 16th and Memorial leaves one dead, another not expected to live.”  The shooter said he had a beef.

24. “Another weekend, another mass shooting.  Thirteen have been shot in 2 violent episodes this spring.”  The latest one involved “1 dead, five hurt in Winston-Salem shooting late Saturday; man killed was young hip hop artist.”  Both in Winston-Salem.

25. “3 people shot in Mount Hope.”  This came in front of the headquarters for a San Diego black motorcycle club.  Yes, they have them.  Yes, they are no strangers to hyper-violence.

Muzzie terrorists are pretty proficient at the crime as well:

The perpetrators of the Parkland school massacre, the Las Vegas massacre and the Texas First Baptist Church massacre were Americans. Muslim terrorists however were responsible for the mass shootings at the Pulse nightclub and in San Bernardino. While the Vegas shooter was responsible for the deadliest attack last year, the deadliest attacks of 2015 and 2016 were both carried out by Muslim terrorists.

Two of the last three years were dominated by mass shootings carried out by Muslim terrorists.

In the last decade, there were only 10 major mass shootings where the death toll went into the double digits. Three of those were carried out by Muslim terrorists. That’s all the more remarkable since Muslims make up less than 1% of the United States population, but account for 33% of major mass shootings. Proportional to their representation in the population, Muslims are responsible for far more mass shootings than Americans.

……Muslim mass shooter Kori Ali Muhammad only managed to kill three people in Fresno, his expressions of racial and religious hatred make it clear that we are dealing with a hateful pattern.

Muhammad had sought to kill “as many white males as possible”. He shouted, “Allahu Akbar” when captured by the police. While the media has emphasized Dylann Storm Roof’s racist attack on a black church in Charleston, he was only 1 of 3 racially motivated mass shooters in the past 5 years, 2 were African-Americans, Muhammad and Micah Xavier Johnson, the Black Lives Matter protester who murdered 5 Dallas police officers. Johnson’s massacre of police officers and September 11 were the deadliest attacks on American police officers in this century. Both were carried out by Muslim attackers.

Johnson and Muhammad allegedly both had Nation of Islam ties. As did Gavin Long, who shot six police officers (three fatally), in a spree of racist violence. The funeral of Lovelle Mixon, who murdered 4 police officers in Oakland, included a minister from the Nation of Islam. A hate group championed by Obama’s church, by the Congressional Black Caucus and by a top figure in the Democratic National Committee.

……John Allen Muhammad, also known as the Beltway Sniper, was also a member of the Nation of Islam. The racist terrorist and his accomplice murdered 17 people.

……After Omar Mateen murdered 49 people in the Pulse nightclub massacre, Obama blamed the Muslim terrorist’s gun. He demanded that Congress “end the plague of violence that these weapons of war inflict on so many young lives”. He pontificated that “those who defend the easy accessibility of assault weapons should meet these families and explain why that makes sense.”

But inanimate objects don’t “inflict” anything. And it was up to him to explain why he believed that Muslim migrants, like Omar’s immigrant Afghan parents, should have easy access to America. 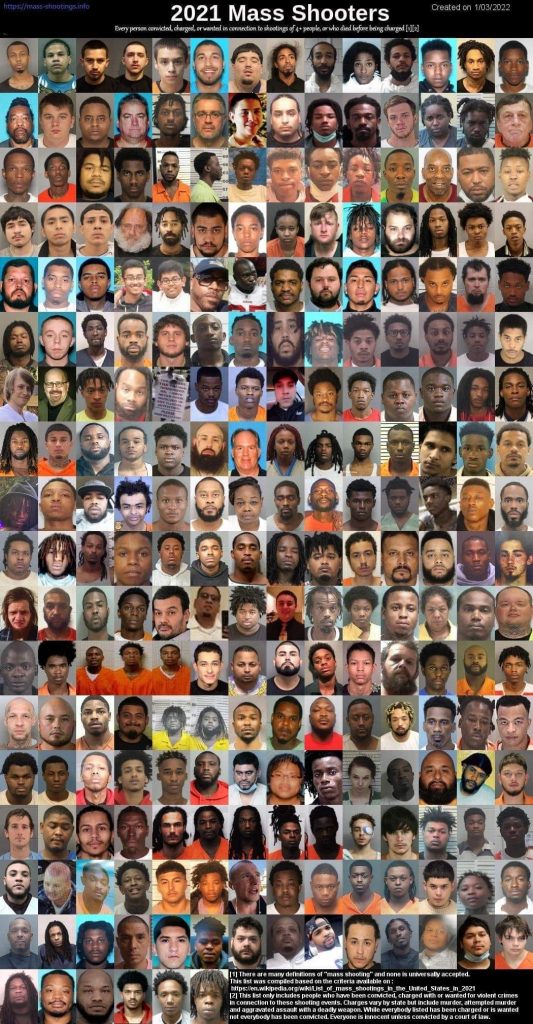 The leftwing propagandists in the fake news media vacillate between blaming “gun control” or the shooter, depending on which one fits their agenda.

Armed criminals and psychopaths deliberately choose soft, unarmed targets. They couldn’t give one shit less about the idea of restrictive gun laws and usually don’t bother with background checks. Every law-abiding American citizen has the right to defend themselves from low-life thugs and deranged morons.

Politicians who want to push through stupid laws that only affect law-abiding citizens and diminish Second Amendment rights have a shit factory for a brain.  The same DemProgs who push for ‘gun control’ are surrounded by armed security.

The leftie nutburgers like to spew their bullshit over ‘gun control’, but seem oblivious to the daily carnage in Dem-controlled ganglands like Chicago, where people have to step over a fucking pile of bodies just to walk down the street. The homicide rates in black neighborhoods is astronomical, but the only black lives that matter are the ones Al Sharpton can use for exploitation and political points.

When rabid leftwingnut James Hodgekinson showed up at a D.C. baseball game and shot Republicans, libturds took to social media and praised his atrocity.

They were also conspicuously silent when illegal alien Jose Ines Garcia Zarate, shot and murdered Kate Steinle as she walked with her father on a San Francisco pier.

Under the Obama regime, mass shootings surged over 200%.

The families of the victims of Obama’s Fast and Furious gunrunning operation can’t seem to get their attention, either.

I’m a member of the NRA. I’m armed and I shoot.  According to the Left’s set of rules, some are more deserving of the Second Amendment than others, and they certainly know how to selectively exploit and politicize gun-related crimes.