Sheriff’s deputies shot nearly 50 lions, tigers and other beasts in a big-game hunt across the Ohio countryside Wednesday after the owner of a wild-animal park threw their cages open and committed suicide in what may have been one last act of vengeance against neighbors and police.

As homeowners nervously took cover indoors, officers spread out through fields and woods to hunt down about 56 animals, including bears, wolves and monkeys.

After an all-night hunt that extended into the afternoon, 48 animals had been gunned down and six captured alive and taken to the Columbus Zoo, authorities said. As of midafternoon, the only animals still on the loose were a wolf and a monkey, according to the sheriff’s office.

ZANESVILLE, Ohio — A mountain lion, grizzly bear and monkey were the only animals still running loose after being set free from an exotic-animal preserve, an Ohio sheriff said today, as authorities tried to piece together why the preserve’s owner apparently released dozens of animals before committing suicide.
The Muskingum County Sheriff’s Office has received numerous complaints since 2004 about animals at the property in eastern Ohio, sheriff Matt Lutz added.

Muskingum County Animal Farm owner Terry Thompson killed himself after freeing the animals, Lutz said, following a night during which officials hunted down and shot to death nearly 30 of the 48 animals, including lions, bears and wolves.
http://blog.cleveland.com/metro/2011/10/only_3_wild_animals_still_loos.html

Unfortunately, the animals had to be shot. 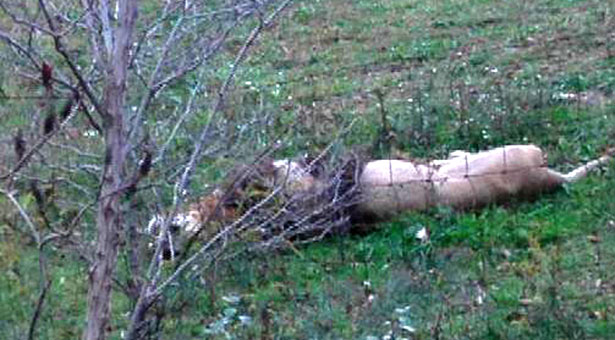 Officers armed with assault rifles patrolled a rural area in eastern Ohio this morning, a day after police killed dozens of animals that escaped from a wild-animal preserve, and where the owner’s body later was found.

Warning that more animals still were on the loose, officials expected up to four school districts to cancel classes as the remaining bears, big cats and other beasts from the Muskingum County Animal Farm were hunted down.

Close to 30 of the 48 animals were shot and killed on Tuesday. Officials were pondering how to dispose of the remains.

“These are wild animals that you would see on TV in Africa,” Sheriff Matt Lutz said at a press conference. He told residents to stay indoors and sent updates to them via Twitter. There were no reports of injuries to the public.

The fences had been left unsecured at the animal farm in Zanesville, about 55 miles east of Columbus, and the animals’ cages were open, police said.

The preserve had lions, tigers, cheetahs, wolves, giraffes, camels and bears. Police said bears and wolves were among the escaped animals that were killed and there were multiple sightings of exotic animals along a nearby highway.

……Staffers from the Columbus Zoo went to the scene, hoping to tranquilize and capture the animals.

……Lutz said his main concern was protecting the public in the rural area, where homes sit on large lots of sometimes 10 acres.

White, the preserve’s neighbor, said Thompson had been in legal trouble, and police said he had gotten out of jail recently.

“He was in hot water because of the animals, because of permits, and [the animals] escaping all the time,” White said. A few weeks ago, she said, she had to avoid some camels which were grazing on the side of a freeway.

……Ohio has some of the nation’s weakest restrictions on exotic pets and among the highest number of injuries and deaths caused by them.
http://blog.cleveland.com/metro/2011/10/police_seek_escaped_exotic_ani.html

There were numerous complaints over the fact that he owned the animals and how he treated them, but the cops’ hands were tied due to the lax regulations.

Those magnificent creatures had to be shot because this asshole thought it would be a great idea to keep animals that are not genetically programed for domestication,  in an area around people.

NEWSFLASH FOR ALL YOU DR. DOOLITTLE WANNABES:

You are not a trained professional. You have no fucking business owning Bengal tigers, boa constrictors, bears,  and African lions as “pets”.  They should be protected in legitimate sanctuaries and zoos, not your fucking backyard in home-made cages.

Governor Kasich, for the love of gawd, do something about this.   Enact common sense  legislation that prevents morons like Thompson getting past the fantasy stage of doing this shit.