There’s been so much blatant fraud that Barr should have issued hundreds of arrest warrants already.

Georgia, Pennsylvania, Michigan, Wisconsin, Arizona, and Nevada all had reported incidents of fraud. 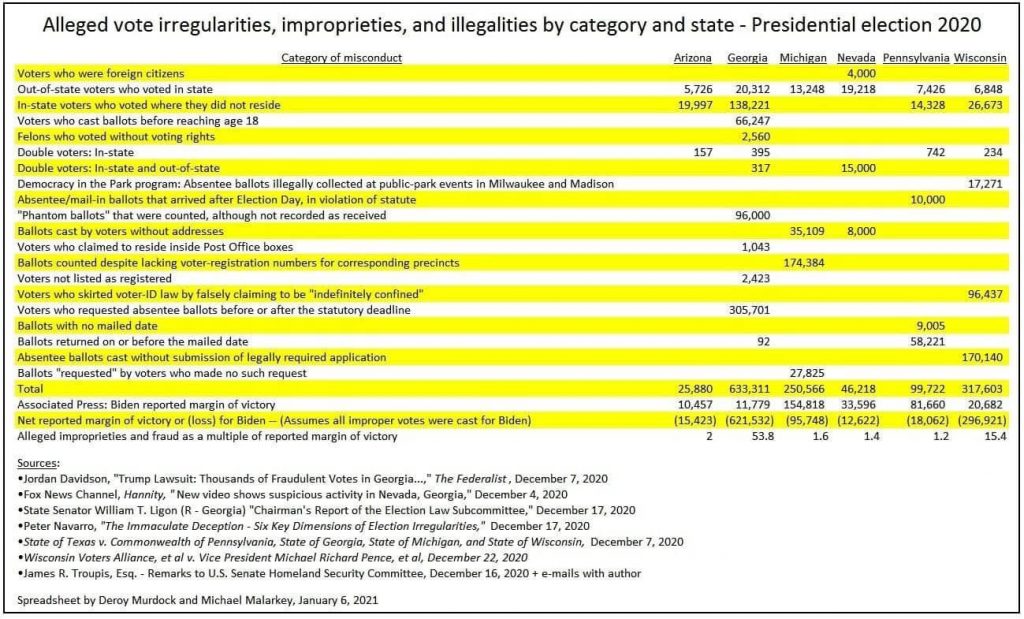 These are the latest:

A woman who said she was a poll observer at the TCF Center in Detroit on Election Day testified in front of a Michigan State Senate hearing that she saw numerous military ballots that looked like “Xerox copies” and were all allegedly marked for Democrat Joe Biden.

The woman, who only identified herself as Patty and said she has nine years’ worth of experience, told the lawmakers that “military ballots … looked like they were all exactly the same Xerox copies of the ballot. They were all for Biden across the board; there wasn’t a single Trump vote.”

“None of the voters [were] registered,” and election workers “had to manually enter the names and addresses and a birth date of 1/1/2020, which would override the system and allow them to enter nonregistered voters, of which I saw several … throughout the day,” Patty said.

The woman said that when she and other GOP observers tried to challenge them, election officials “would tell us ‘no.’”

At one point, the poll observer alleged that when military ballots came in, she and others were told by election officials “to take a break.”

“There were lots of agitators at the TCF Center” who allegedly worked on “behalf of the Democrat Party,” Patty also told lawmakers. She added that GOP poll observers were told to go upstairs to eat while the purported agitators and Democratic poll challengers got food brought in and were able to eat on the same floor, suggesting the unequal treatment of observers.

None of the bipartisan group of lawmakers disputed her account.

Trump attorney Jesse R. Binnall, speaking to Fox Business Wednesday, said that they found evidence of “real voter fraud” including “thousands of thousands of instances” in Nevada that will be submitted to a court in the Silver State.

There are “instances of 40,000-plus people who have voted twice in the election,” Binnall remarked.

As many as 288,000 ballots for the 2020 U.S. election “disappeared” in Lancaster, Pennsylvania, after being transported by truck from New York, according to Phill Kline, the director of the legal group Thomas More Society’s Amistad Project.

Kline, a former district attorney and Kansas attorney general, said he received evidence that between “130,000 to 280,000 completed ballots for the 2020 general election had been shipped from Bethpage, New York, before the ballots and the trailer in which they were shipped disappeared” on Oct. 21. Kline cited statements from a U.S. Postal Service subcontractor whom he described as a whistleblower.

Kline also asserted in a statement that Postal Service workers were engaged in “widespread illegal efforts” to influence the election. At least one whistleblower said that they transported thousands of prefilled ballots across state lines, which, if true, would be a federal crime. His group made an “estimate” of the number of ballots that disappeared.

Kline said that the group will share the information with law enforcement, including the FBI, U.S. attorneys in other areas, and local prosecutors “who are aware of our evidence.”

Neither the FBI nor the Postal Service immediately responded to a request by The Epoch Times for comment.

The man identified by Kline as the whistleblower, Jesse Morgan, a truck driver for a USPS subcontractor, said at the news conference that he was driving a truck filled with up to 288,000 ballots on Oct. 21, according to Just The News. The truck—and ballots—disappeared from a USPS depot in Lancaster after he dropped it off there, he said.

Morgan added that Postal Service personnel exhibited “odd behaviors” that “grossly deviate[d] from normal procedure and behavior” on that day. The driver said he was transporting completed mail-in ballots with addresses in Harrisburg, but he had to deliver his ballots to Lancaster, which he felt was unusual. That was before the trailer “disappeared,” in Morgan’s words.

The Amistad Project had uncovered hundreds-of-thousands of ballots affected by election fraud in five states, including Pennsylvania and Wisconsin. They have demanded election officials send logs and video of ballot handlers at several polling locations, especially at mail-in ballot drop boxes.

One batch of 23,000 ballots all for Biden identified as fraudulent.

Georgia Video Footage Shows Poll Workers Staying Behind, Producing Boxes of Ballots. One of the Dem operatives filmed pulling out suitcases of ballots IS IDENTIFIED as Ruby Freeman.

A volunteer poll observer in Arizona’s Pima County claimed she was told by election officials to allow people to vote who may not have been properly registered to vote in Arizona on Election Day.

Poll observer testifies before MI House Oversight Committee about the fraud she witnessed.