The DOJ is refusing to investigate Fauci’s communications, including the “nature and content” of phone conversations with Mark Zuckerberg. Several members of the White House staff are among 50-plus federal officials tied to “misinformation” removal efforts.

Even as Biden warns the nation of the “extremist threat to our democracy” from Republicans in this fall’s elections, new evidence suggests a much wider campaign by his administration to sic Big Tech on critics than previously thought, going so far as removing a parody of Biden’s chief medical adviser Anthony Fauci.

The First Amendment lawsuit by Republican attorneys general and a civil liberties group against Biden, Fauci and several other high-level officials has revealed a “massive, sprawling federal ‘Censorship Enterprise'” related to COVID-19 and elections, the plaintiffs said in a 711-page “joint statement on discovery disputes.”

“If there was ever any doubt the federal government was behind censorship of Americans who dared to dissent from official Covid messaging, that doubt has been erased” by what the defendants have already turned over, New Civil Liberties Alliance lawyer Jenin Younes said.

The “defendants’ position” left out the elephant in the room: the likelihood of even greater harm to Democratic prospects if sensitive communications including Fauci and White House Press Secretary Karine Jean-Pierre are required to be divulged before the midterms. Schmitt is the GOP nominee for retiring Sen. Roy Blunt’s seat.

The plaintiffs are keen to compel Fauci to discuss the “nature and content” of his oral conversations with Zuckerberg, who gave the long-serving public health bureaucrat his personal cell phone number in March 2020.

They also want the court to force defendants to identify officials and agencies “whom they know of outside their own agencies” who have had similar conversations, and compel “complete responses” from the Department of Health and Human Services and Fauci “in his capacity” as National Institute of Allergy and Infectious Diseases director.

DOJ provided a list of 45 officials from just within HHS and DHS, but Meta identified 32 and YouTube 11. Those two lists included White House officials and had many names left off DOJ’s lists, the plaintiffs said. Twitter’s list of nine revealed “senior” State contacts.

Federal officials often seem to use “alternative channels of communication” to flag “specific posts and content for censorship,” the plaintiffs allege, citing a misinformation reporting channel Facebook set up for CDC and Census Bureau officials. The tech platforms are resisting this discovery, citing the Stored Communications Act, the plaintiffs said.

As digital director of the White House COVID response, Humphrey asked Facebook to take down the Fauci parody account on its sibling app Instagram. An unidentified staffer responded less than a minute later: “Yep, on it!” That email chain included Dave Sommer, then-public policy manager at Instagram. 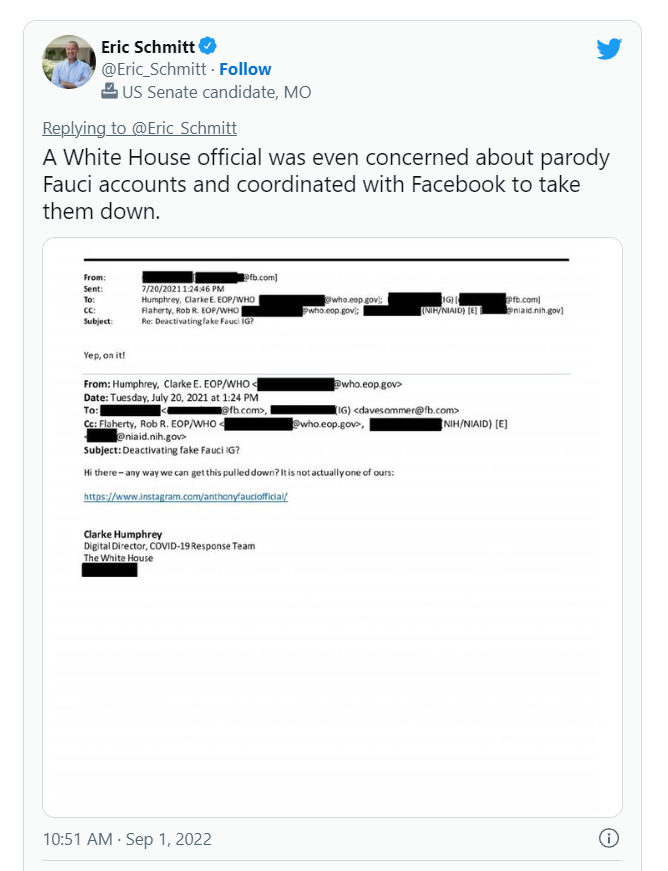 CISA’s director was documented griping to a colleague that tech platforms remain “hesitant” to censor for the feds. Jen Easterly called for closer cooperation “so relevant agencies can try to prebunk/debunk” purported misinformation.

According to Schmitt’s tweet thread Thursday laying out some of the players and their communications, CISA reached out to Twitter, Google, Meta and Microsoft days after DHS announced the Disinformation Governance Board.

Facebook and Microsoft thanked CISA for the offer to address the “confusion” over who’s in charge, given that it already had a similar team for fighting “Mis-, Dis-, and Malinformation.” Months earlier, an MDM team member told Facebook that Treasury Deputy Secretary Wally Adeyemo wanted to discuss “potential influence operations on social media.”

Facebook worked to appease Biden after the president accused the company of “killing people” through insufficient content moderation, according to the suit and Schmitt’s thread.

A Meta executive asked Surgeon General Vivek Murthy, who had just issued his health advisory on misinformation, for “a way to deescalate and work together collaboratively.” A week later, the executive told Murthy about Meta’s new censorship policies and steps against the “disinfo dozen” led by Robert F. Kennedy Jr.

A “senior” Facebook official emailed Murthy about a meeting between “our teams” to discuss “what the White House expects from us on misinformation going forward.” Asked by Murthy for an “update,” the same person explained how Facebook was “increasing the strength of our demotions” for COVID misinformation. Andy Slavitt, a senior adviser on Biden’s COVID response team, also got a “Facebook bi-weekly covid content report” from the executive.

Related to White House pressure on Twitter to ban Berenson, Rob Flaherty, Biden’s director of digital strategy, informed White House and HHS colleagues that Twitter would brief them on “tangible effects” from its misinformation policy changes, new interventions and “ways the White House (and our COVID experts) can partner in product work.”

Big Tech also conspired with the Biden regime to suppress free speech during the mid-term elections.