Incriminating evidence on Hunter Biden’s laptop, the truth about covid, and the truth about elections were classified as “misinformation” and quickly taken down.  The censorship was done with the complicity of Mark Zuckerberg, Jack Dorsey, and Parag Agrawal.

“Misinformation” is what the government autocracy says it is.

The Department of Homeland Security is quietly broadening its efforts to curb speech it considers dangerous, an investigation by The Intercept has found. Years of internal DHS memos, emails, and documents — obtained via leaks and an ongoing lawsuit, as well as public documents — illustrate an expansive effort by the agency to influence tech platforms.

Behind closed doors, and through pressure on private platforms, the U.S. government has used its power to try to shape online discourse. According to meeting minutes and other records appended to a lawsuit filed by Missouri Attorney General Eric Schmitt, a Republican who is also running for Senate, discussions have ranged from the scale and scope of government intervention in online discourse to the mechanics of streamlining takedown requests for false or intentionally misleading information.

In a March meeting, Laura Dehmlow, an FBI official, warned that the threat of subversive information on social media could undermine support for the U.S. government. Dehmlow, according to notes of the discussion attended by senior executives from Twitter and JPMorgan Chase, stressed that “we need a media infrastructure that is held accountable.”

“We do not coordinate with other entities when making content moderation decisions, and we independently evaluate content in line with the Twitter Rules,” a spokesperson for Twitter wrote in a statement to The Intercept.

There is also a formalized process for government officials to directly flag content on Facebook or Instagram and request that it be throttled or suppressed through a special Facebook portal that requires a government or law enforcement email to use. At the time of writing, the “content request system” at facebook.com/xtakedowns/login is still live. DHS and Meta, the parent company of Facebook, did not respond to a request for comment. The FBI declined to comment.

……According to a draft copy of DHS’s Quadrennial Homeland Security Review, DHS’s capstone report outlining the department’s strategy and priorities in the coming years, the department plans to target “inaccurate information” on a wide range of topics, including “the origins of the COVID-19 pandemic and the efficacy of COVID-19 vaccines, racial justice, U.S. withdrawal from Afghanistan, and the nature of U.S. support to Ukraine.”

“The challenge is particularly acute in marginalized communities,” the report states, “which are often the targets of false or misleading information, such as false information on voting procedures targeting people of color.”

The inclusion of the 2021 U.S. withdrawal from Afghanistan is particularly noteworthy, given that House Republicans, should they take the majority in the midterms, have vowed to investigate. “This makes Benghazi look like a much smaller issue,” said Rep. Mike Johnson, R-La., a member of the Armed Services Committee, adding that finding answers “will be a top priority.”

DHS justifies these goals — which have expanded far beyond its original purview on foreign threats to encompass disinformation originating domestically — by claiming that terrorist threats can be “exacerbated by misinformation and disinformation spread online.” But the laudable goal of protecting Americans from danger has often been used to conceal political maneuvering.

……Prior to the 2020 election, tech companies including Twitter, Facebook, Reddit, Discord, Wikipedia, Microsoft, LinkedIn, and Verizon Media met on a monthly basis with the FBI, CISA, and other government representatives. According to NBC News, the meetings were part of an initiative, still ongoing, between the private sector and government to discuss how firms would handle misinformation during the election.

……In 2019, DHS created a separate entity called the Foreign Influence and Interference Branch to generate more detailed intelligence about disinformation, the inspector general report shows. That year, its staff grew to include 15 full- and part-time staff dedicated to disinformation analysis. In 2020, the disinformation focus expanded to include Covid-19, according to a Homeland Threat Assessment issued by Acting Secretary Chad Wolf.

This apparatus had a dry run during the 2020 election, when CISA began working with other members of the U.S. intelligence community. Office of Intelligence and Analysis personnel attended “weekly teleconferences to coordinate Intelligence Community activities to counter election-related disinformation.” According to the IG report, meetings have continued to take place every two weeks since the elections.

Emails between DHS officials, Twitter, and the Center for Internet Security outline the process for such takedown requests during the period leading up to November 2020. Meeting notes show that the tech platforms would be called upon to “process reports and provide timely responses, to include the removal of reported misinformation from the platform where possible.” In practice, this often meant state election officials sent examples of potential forms of disinformation to CISA, which would then forward them on to social media companies for a response.

Under President Joe Biden, the shifting focus on disinformation has continued. In January 2021, CISA replaced the Countering Foreign Influence Task force with the “Misinformation, Disinformation and Malinformation” team, which was created “to promote more flexibility to focus on general MDM.” By now, the scope of the effort had expanded beyond disinformation produced by foreign governments to include domestic versions. The MDM team, according to one CISA official quoted in the IG report, “counters all types of disinformation, to be responsive to current events.” 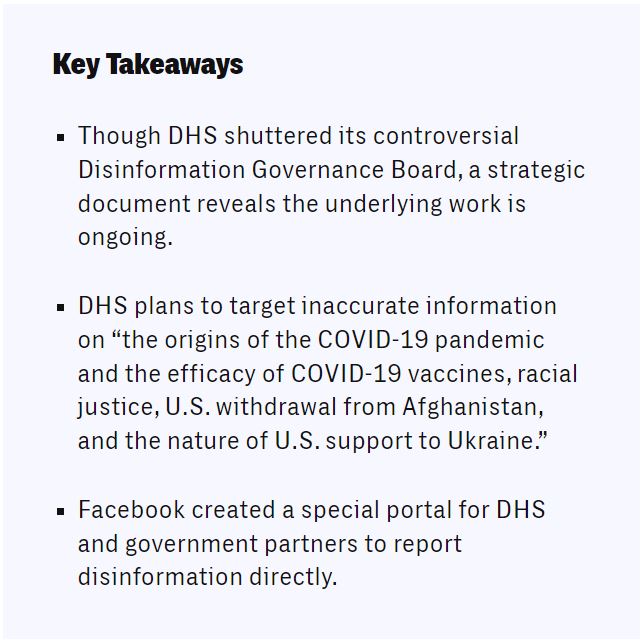 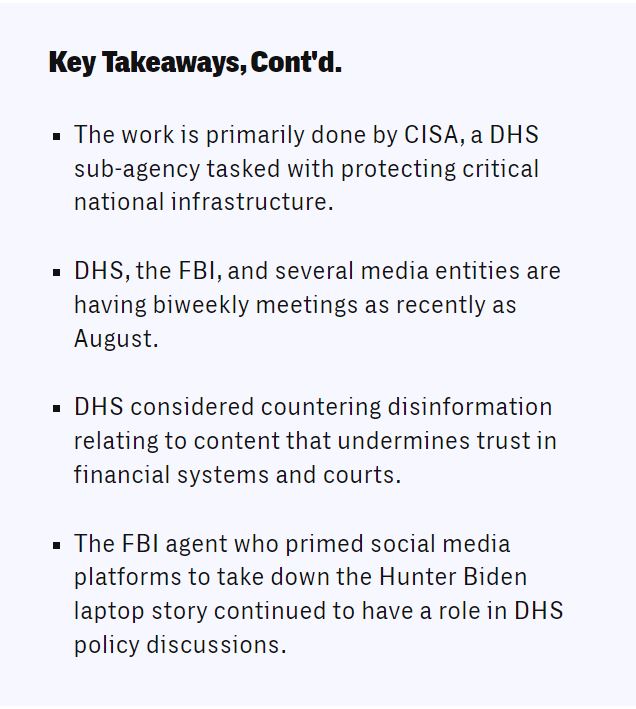 Read the entire article.  It shows clearly how the Biden regime and Big Tech media are trying to crush the 1st Amendment.

The ruling Dem regime is out of control. They’ve rammed through bad, oppressive legislation. They shit on the Constitution. They have created a system of bullying and persecution of political opponents.  They are the real threat to this country. Dems, their leftwing media tools, their rampaging leftist mobs, and weaponized government agencies that want to transform America into a police state.

Questioning election integrity and pointing out that Hunter Biden’s own emails revealed his connections to ChiCom business partners and his Chinese mistress to the Chinese government,  makes you a target for the DHS and Big Tech.

All 3 Big Tech CEOs have decided on a global censorship database.  The goal is to suppress the free speech of people, groups, and organizations they hate.

The impact of the Biden family corruption on policy and national security is abetted by their praetorian guards in the DHS, FBI, and the DOJ.