Unlawful entry, refusal to leave, harassing officials. Colbert’s mob won’t be charged, but Jan 6 protesters are being held in Biden’s gulag without due process, and Merrick Garland’s jackboots sent a 70 year old woman with cancer to jail for protesting. 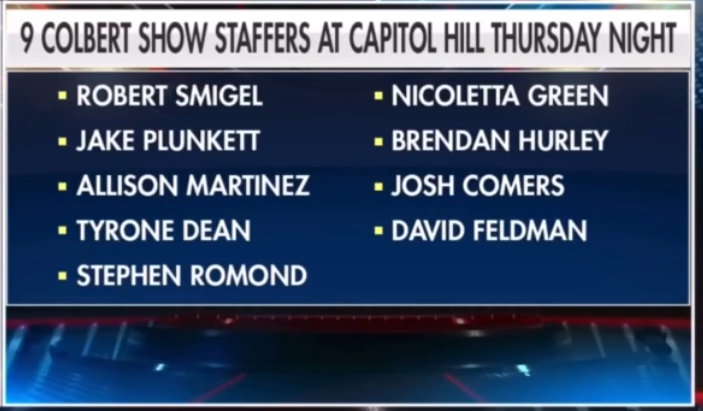 Video shows members of Stephen Colbert’s team within a congressional office building prior to their arrest for unlawful entry on June 16.

Capitol Police arrested nine individuals associated with comedian Stephan Colbert on the sixth floor of the House Longworth Office Building, which sits across Independence Avenue from the U.S. Capitol.

Police say the crew was warned “several times” against trespassing on Capitol grounds and that a concerned staffer for Rep. Jamaal Bowman, D-NY, alerted authorities to their presence because their behavior caused him to fear for his safety.

Footage of the Colbert team’s shenanigans, obtained by Just the News, shows some of the crew outside of Georgia GOP Rep. Marjorie Taylor Greene’s office. One individual appears to try hanging a poster outside the Georgia Republican’s door while another films the stunt with his phone.

At one point, a member of the crew holds up Triumph the Insult Comic Dog, a puppet character that has appeared in multiple late night comedy programs, including Colbert’s “Late Show.”

They were cleared into the complex by staffers for Rep. Jake Auchincloss, D-Mass., and House January 6 Committee Member Adam Schiff, D-Calif. They knew what was going to happen and why. Where’s the DOJ investigation?

Another reason Merrick Garland needs to be kicked to the curb. He’s not about equal application of the law. He’s owned by the DNC and does whatever they tell him to do.