The same U.S. Attorney’s office that has prosecuted scores of Jan. 6 protesters for trespassing and other crimes has declined to prosecute nine members of TV comedian Stephen Colbert’s The Late Show production team for unlawful entry into a congressional office building, Capitol Police announced Monday evening.

“The United States Capitol Police (USCP) has been working with the U.S. Attorney’s Office for the District of Columbia on the June 16, 2022, Unlawful Entry case that involved a group of nine people associated with The Late Show,” the department said in a press release.

“The United States Capitol Police was just informed the U.S. Attorney’s Office for the District of Columbia is declining to prosecute the case,” they added.

Capitol Police said they arrested the nine producers on unlawful entry charges, saying “members of the group had been told several times before they entered the Congressional buildings that they had to remain with a staff escort inside the buildings and they failed to do so.”

Capitol Police said they “respect the decision that office has made” but also signaled some unhappiness with the decision by telling the media the U.S. attorney would have to explain its reasoning. “Any questions about that decision should be referred to the U.S. Attorney’s Office for the District of Columbia,” it said.

Colbert has made light of the conduct of his arrested staffers, saying they were only guilty of “first-degree puppetry.”

The same gang of rectoids mocked and harassed speakers at a rally for families of J6 defendants, including the family of Matthew Perna, who committed suicide after being hounded by government jackboots for exercising his free speech rights. 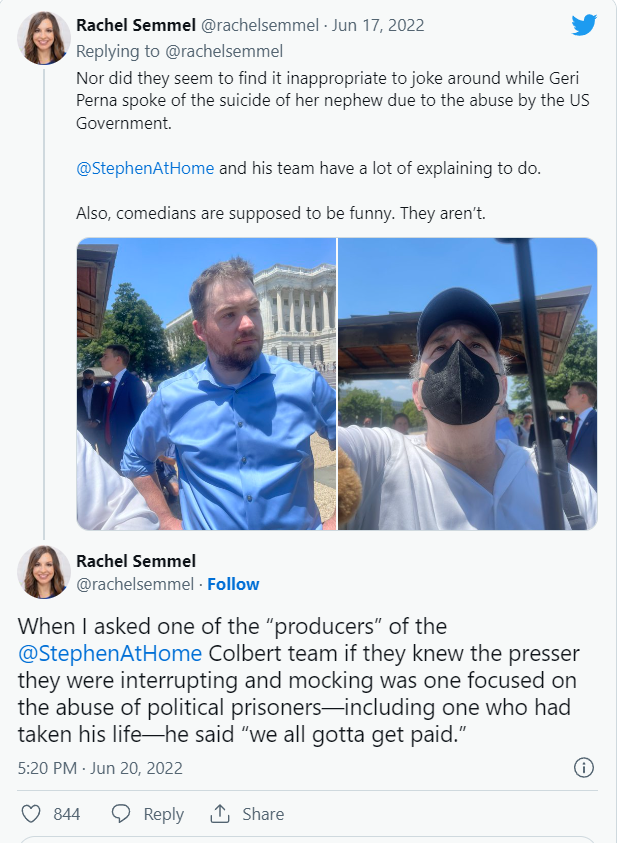 These shitbags were cleared into the complex by staffers for Rep. Jake Auchincloss, D-Mass., and House January 6 Committee Member Adam Schiff, D-Calif.  They knew what was going to happen and why. Where’s the fucking capitol police investigation? These lowlifes are walking free while they sent a 70 year old grandmother with cancer to jail for “parading”. They should be carted off to the same DC gulag where the January 6 protesters are being held without due process.