According to the National Museum of Black History and Culture, here are some of the disgusting attributes (i.e. afflictions) of being White: self-reliance and independence, nuclear family, rational linear thinking, hard work, respect authority, plan for the future, protection of property and entitlements, and being polite. The Woke Cancel Culture can’t stand it.

The connotation being that uppity white folks think they’re better because they work hard and don’t expect a handout.

Smithsonian’s National Museum of African American History & Culture had posted on its website a chart called, “Aspects and Assumptions of Whiteness & White Culture in the United States.” The chart examined aspects of whiteness such as individualism, hard work, the scientific method, the nuclear family, respect for authority, and delayed gratification that are ingrained in American culture as the “norm.” 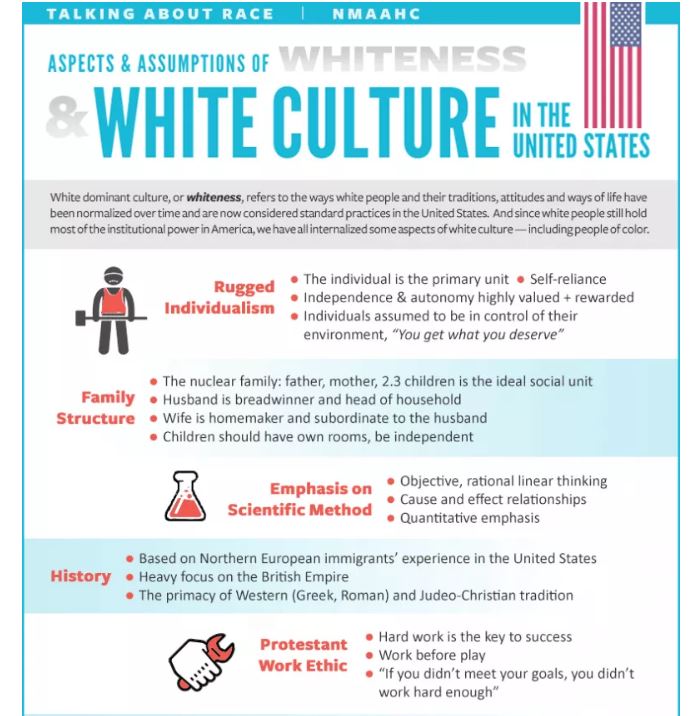 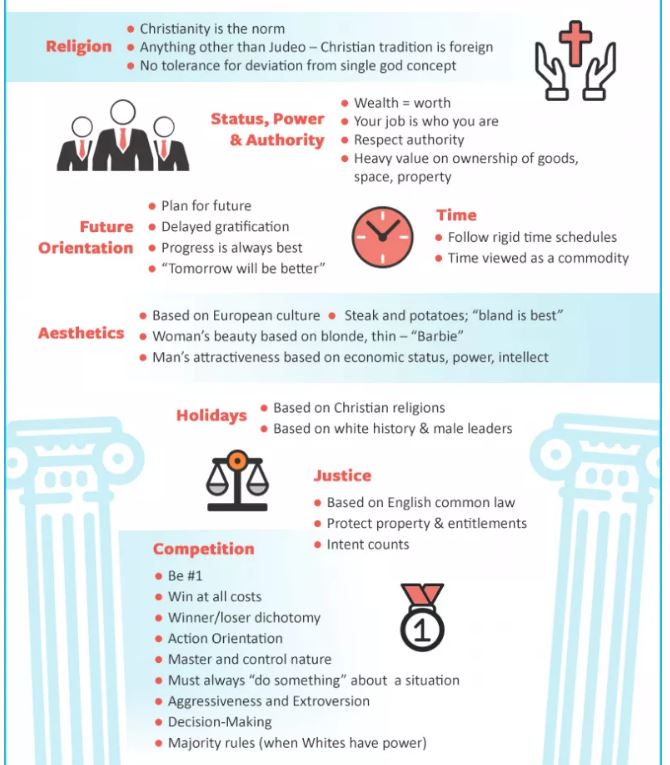 The Smithsonian National Museum of African American History and Culture recently unveiled guidelines for talking about race. A graphic displayed in the guidelines, entitled “Aspects and Assumptions of Whiteness in the United States,” declares that rational thinking and hard work, among others, are white values.

In the section, Smithsonian declares that “objective, rational, linear thinking,” “quantitative emphasis,” “hard work before play,” and various other values are aspects and assumptions of whiteness.

The Smithsonian National Museum of African American History and Culture had no comment for Newsweek. They referred to the website’s page titled “Whiteness” when asked for additional comment. The graphic was later removed from the page.

“White dominant culture, or whiteness, refers to the ways white people and their traditions, attitudes, and ways of life have been normalized over tiem and are now considered standard practices in the United States,” the introduction to the section reads. “And since white people still hold most of the institutuional power in America, we have all internalized some aspects of white culture— including people of color.”

Another section says that white values include “steak and potatoes: ‘bland is best'” and that white people have “no tolerance for deviation from a single god concept.”

It’s a basic instruction on how to succeed in western society.  Work ethic, be on time, decision making, plan for the future, protect your property, proper grammar, be polite, etc, are apparently signs of “white supremacy”.  Ok.

If the segment of the black population with illiteracy, food stamps, welfare, gangs, murder, poverty, and repeated prison sentences would adopt some of those “Aspects and Assumptions of White Culture”, they’d be a hell of a lot better off.

I laugh every time black or white radicals try to extort guilt out of white people—working class or wealthy. They want to drag everyone down to their level; the bigotry of low expectations.

Newsflash, I have no white guilt or fucks to give.