Via The Daily Caller

The investigation concluded Sept. 6, and the report was issued Sept. 13.

The investigation sought to determine if the exchange of emails on Clinton’s server “represented failure to properly safeguard classified information” and whether any individuals at State were culpable for any of the failures.

Clinton exchanged more than 60,000 emails on a private email account hosted on a server that she kept at her residence in New York. She emailed frequently with longtime aides Huma Abedin, Cheryl Mills, Jake Sullivan, and an outside adviser, Sidney Blumenthal.

The FBI investigated whether Clinton mishandled classified information by using the server. Former FBI Director James Comey announced July 5, 2016, that he would not be recommending charges against Clinton over the server, though he did say she was “extremely careless” in using an off-the-books email system.

“Extremely careless”. The entire crime was done on purpose.

Hillary’s IT specialist Paul Combetta, went on Reddit requesting technical advice on how to strip a “VIP (VERY VIP)” email address from archives stored on a server he has “full access to“. He posed as ‘Stonetear’ on the site, and the ‘VIP’ was indeed Hillary. Combetta used the computer program “Bleachbit” to destroy Clinton’s records, despite an order from Congress to preserve them, and Samuelson also destroyed Clinton’s emails.

IT Specialist Paul Pagliano created Hillary’s email server over a series of months while working in a room on K Street in D.C.  After he constructed the server, Pagliano stated that he “rented a minivan and drove to Chappaqua New York to install the email server in the Clinton residence.”

The FBI had all this information and never divulged it during the hearings. Obama’s DOJ ordered them not to charge Hillary with “gross negligence” by mishandling classified information.

Hillary deliberately used an illegal, unsecure server to store and transmit classified information, tampered with evidence, deleted incriminating emails, and lied before Congress. It’s right in front of everyone’s face.  She knew that it was a national security violation, but did it anyway.

All kinds of federal laws were broken. 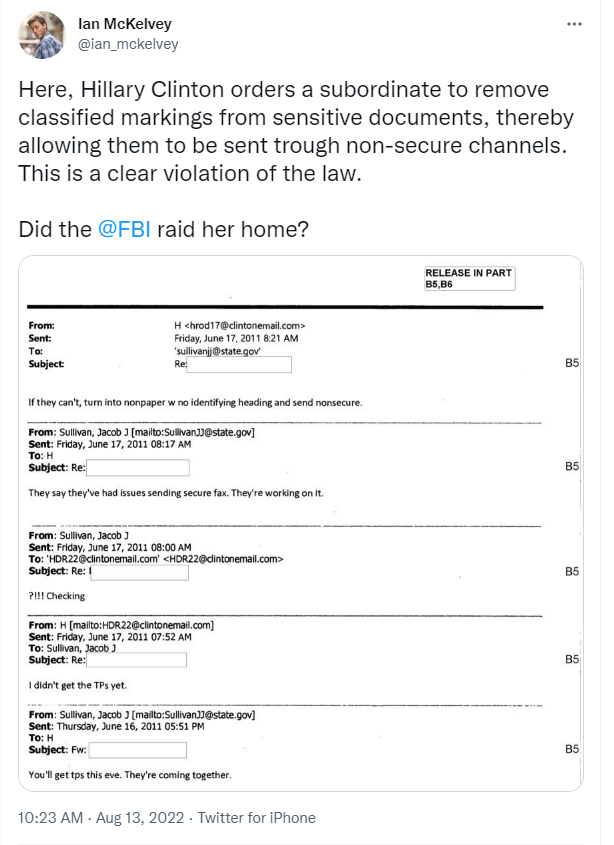 By the way: Obama knew about her unsecure email and engaged in correspondence. And he lied about it. If Clinton had been charged, Obama’s culpable involvement would have been blatant.

I was an intelligence analyst for the bulk of my Army career. If I had done a fraction of what this scrunt has gotten away with, I’d have been Court Martialed and thrown under Leavenworth.

Hillary’s corruption with the Clinton Foundation is another crime for which she’s yet to be punished.