The “Tea Party Express” is expected to barnstorm from state to state on a national tour, beginning March 27 and ending April 15, to host a series of rallies in dozens of U.S. cities. 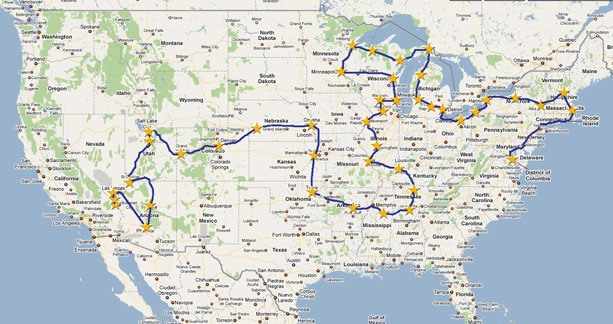 Kicking off in Reid’s home state of Nevada.

Fewer taxes, less government and no ‘Obamacare’ — that’s the message the Tea Party Express hopes to send to Washington when it descends Saturday on Senate Majority Leader Harry Reid’s hometown of Searchlight, Nev.

The Tea Party Express, one of the most visible factions of the national Tea Party movement, officially kicked off its cross-country, 42-city bus tour outside a hotel in Laughlin, Nev., early Saturday.

Dozens of activists gathered in the parking lot of Harrah’s Laughlin hotel and piled into a caravan of three buses, headed for Reid’s dusty hometown of Searchlight, where movement organizers said they are expecting a crowd of up to 10,000 conservative activists.

“Harry Reid is symbolic of the problems in Washington in the sense that he’s been the leader in the Senate of all the things we’ve been against — expanding the government, increasing the deficit and raising taxes,” Sal Russo, chief strategist of the Tea Party Express, told FoxNews.com.

“He campaigned as a moderate, but has moved so far to the left,” Russo said. “Voters are tolerant of different views, but what they don’t like is when someone campaigns one way and then governs by another.”
http://liveshots.blogs.foxnews.com/2010/03/27/tea-party-express-hits-the-road/

Movement leaders say the message in the Copper State will be the same: fewer taxes, less government spending, and a repeal of the massive health care overhaul Obama signed into law last week.

“We just want our country back,” said Mark Williams, vice chairman of the Our Country Deserves Better PAC, which is funding the Tea Party Express bus tour to 42 cities and 23 states.
http://liveshots.blogs.foxnews.com/2010/03/28/day-2-the-tea-party-express-hits-arizona/

Searchlight Nevada protest, and the contrasting leftwing moonbat gathering at Los Angeles. Take careful note of the difference between the protesters in nevada and the ones in Los Angeles.
http://pajamasmedia.com/zombie/2010/03/29/searchlight-vs-l-a-rival-rallies-reveal-stark-rightleft-divide/?singlepage=true

And of course the union/Harry Reid thugs showed up:
http://biggovernment.com/lrussell/2010/04/05/police-neggligence-in-tea-party-bus-egging-case/

That’s the modus operandi of the Left when they lose the argument. We have them scared shitless. They do not want to lose their grip on power, so they commit assault, and try to censor opposition.
More here: http://biggovernment.com/?s=Seachlight