Hi-larious satire by the snarks at the People’s Cube, in an effort to teach the rank amateurs at the “occupy” protests all about real communism.

Finally, the barely educated and feeble-minded American intellectuals – or, as we like to call them, Useful Intellectuals (UI) – have their alternative news source called “Occupy Wall Street Journal.” The new edition is aiming to become equal in scope and coverage to The People’s Cube – which, by definition, is the only korrekt source of the Current Truth for libs and progs.

Granted, the new revolutionary edition is a well-meaning attempt to teach the unwashed masses the intricacies of overthrowing whatever it is they are overthrowing this week, based on the models already developed in Syria, Greece, Egypt, etc. – places they imagine to be exactly like the United States, both economically and politically. They are hoping that using the same methods might produce the same results: a moral and political vacuum to be filled by us – the glorious People’s Vanguard™!

Predictably, the pages of O-WSJ are filled with embarrassingly weak pansy drivel that betrays the limited mind of the spoiled bourgeois intelligentsia. These writers are limited in ideas and in the will to kill for those ideas.

We here at the Party Organ, on the other hand, have no such limitations. Our slogan is and has always been:

It is imperative that we – the battle-hardened Bolshevik comrades, all survivors and active participants of riots, revolutions, purges, and show trials – urgently teach some strong communism to the liberal weaklings at”Occupy WSJ”!

Use this thread to post short and vigorous samples of korrekt revolutionary writing for the young Occupussies™ ** to learn from. If you can’t think of anything original, don’t hesitate to rip off your comrades on existing threads. And by all means, use our vast archives – the ultimate hive mind of the prog community! 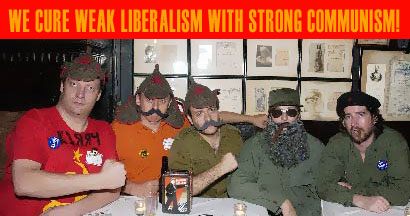