By Mike Sweeney at the Daily Caller.

Like many Americans I sat glued to my television watching the Boston terrorist manhunt unfold. I followed the action interactively, watching my Twitter feed, listening to the Boston P.D. scanner online, and most of all, watching it live on a variety of the Boston area TV stations which seemed to be out in front of the big national news outlets.

While sitting, watching the images come across the screen of cocked and locked – armored up SWAT troops, riding around on armored vehicles all I could think of was the video game “Call of Duty, Modern Warfare.”  It looked exactly like the scene where America is invaded by a foreign army.

One big difference though, this foreign army was one religious fanatic.

I watched these surreal scenes unfold, SWAT teams riding around the neighborhoods, searching, dismounting, stacking, and pulling innocent –  law abiding citizens out of their homes at the muzzle of an M4, or more accurately, many M4s.  I watched the people, as they were dragged out of their homes for the most part taking no issue with these tactics and I was shocked. I kept wondering, “How many other people watching this are taking issue with what we are seeing here?”  It seemed so wrong to me, for many reasons, to see so many people literally pulled out of their homes at gunpoint, children in arms, many without shoes on, for god knows how long, all because the government soldiers said so. Have we as a nation become this conditioned and this dependent on our government to protect and save us?

……The voters of the Commonwealth of Massachusetts have time and again voted as a majority to send anti-gun legislators to congress, and all levels of state positions, overwhelmingly supporting candidates who have pushed for gun control on both the local and national level. Now, here they were, disarmed by their own doing and getting dragged out of their homes at gunpoint. I once again wondered, “Are they happy now?”

Our city, our capital and many surrounding towns were literally and figuratively shut down and under martial law.  There were a million of residents sitting waiting and watching, thousands of residents pulled from their homes, and not a single voice of dissent. I understand the enormity of the situation; armed terrorists had just shocked our country. I understand the desire on the part of law enforcement to bring the terrorist to justice, especially in light of the previous night’s pursuit and resulting gun fights, which killed one officer and critically wounded another.

The manhunt on the other hand was a step too far. At the height of it we had approximately 9,000 police, many of them in full combat gear, with approximately 9,000 handguns, 3,000 M4 rifles and 500,000 rounds of ammunition to catch one terrorist in a Boston suburb. Does this sound ridiculous to anyone else?

Just for a little perspective we only sent in 160 men to catch Osman Ali Atto in Mogadishu.

Was this a manhunt or a justification of the militarization of our civilian police force?  I don’t know what bothers me more about the situation, that we voted to enable this sort of thing, that we were so willingly complacent to let our government trample our rights in the name of justice, or that nobody took issue with it?

By the way, it was an alert citizen who guided the police to Dzhokar Tsarnaev. Otherwise they would have never found him.

After I read reports and watched videos of the police gone amok, I have the same concerns as Sweeney.  From what I saw, exigent circumstances did not apply.

The same thing happened in Colorado after a bank robbery. Innocent people were pulled from their vehicles at gunpoint and arrested at a police barricade:

“We didn’t have a description, didn’t know race or gender or anything, so a split-second decision was made to stop all the cars at that intersection, and search for the armed robber,” said Aurora police Officer Frank Fania. 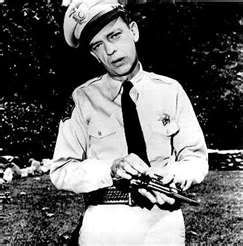 In their zeal to find the terrorists, common sense took a back seat.

If the innocent citizens who were dragged from their homes don’t raise hell with the local authorities after being treated like dangerous criminals, they deserve whatever future Police State they get.