In this corner: Fred Phelps and his slimy bunch of Westboro Baptist Church assclowns, who make regular appearances at military funerals and wave signs with  ”God Hates Fags”  printed on them.

In the other corner,  radical Islamic excrement that operates mosques and “education” centers.

A Kansas church group known for protesting soldiers’ funerals was here this morning, holding an anti-Muslim demonstration at the Islamic Center of America. As parents dropped their children off at the Muslim American Youth Academy next-door to the mosque, three members of the Westboro Baptist Church stood on a grassy median along Altar Road, carrying signs that said, “Imams are pedophiles,” and “God hates Muslims.”

Both the Westboro inbreds and the muzzies hate the country, homosexuals, the American military, and Jews.

They have a lot in common. 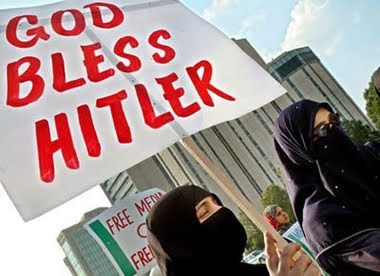 The Westboro Baptist Church is a cluster of rabid, backwoods, fire and brimstone hilljacks. Dearborn is the epicenter of radical Islamic zealots in the Midwest.

God must have one hell of a sense of humor.