The webpage of the U.S. National Archives that hosts the nation’s own Constitution has a “harmful language alert” for readers at the top of the page.

The alert now appears on many pages on the archives.org website, and links to a page entitled “NARA’s Statement on Potentially Harmful Content,” which they define as:

It does, however, appear on the page of the U.S. Constitution: 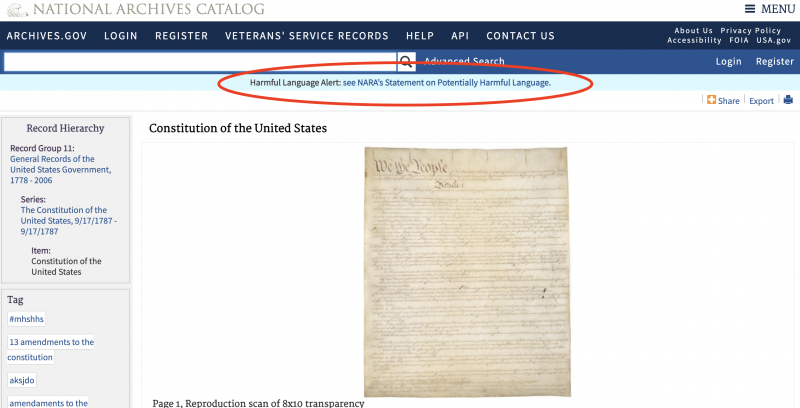 More from The Federalist:

The warning applies to all documents across the Archives’ cataloged website, including the Bill of Rights and the Declaration of Independence.

……This isn’t the first time the National Archives has catered to a leftist view of history. In June, the National Archives’ racism task force claimed that the Archives’ rotunda, which houses founding documents, is an example of “structural racism.” The task force also pushed to include trigger warnings around displays of the Declaration of Independence, the Constitution, and the Bill of Rights, which are all in the rotunda.

The warning is a blanket statement atop all documents in the archived catalogs that links to a “Statement on Potentially Harmful Content.”

I sent an email to the Archivist, David S. Ferriero. I asked him the following:

So what exactly about the Constitution rattles your cage? The Checks and Balances? The Bill of Rights? The Tenth Amendment?

Which principles in that document are so offensive that you feel compelled to put a “harmful language alert” at the top of the page?

If I get a response, I’ll include it in an update.