A Saudi Arabian man described by a Border Patrol official as a “potential terrorist” was arrested in Arizona last week after illegally crossing into the US.

Clem did not elaborate on the “Yemeni subjects of interest.”

Images of the man accompanying Clem’s tweet show him wearing a jacket with a backward American flag patch on one sleeve, and one that reads “Central Oneida County Volunteer Ambulance Corps” on the other. 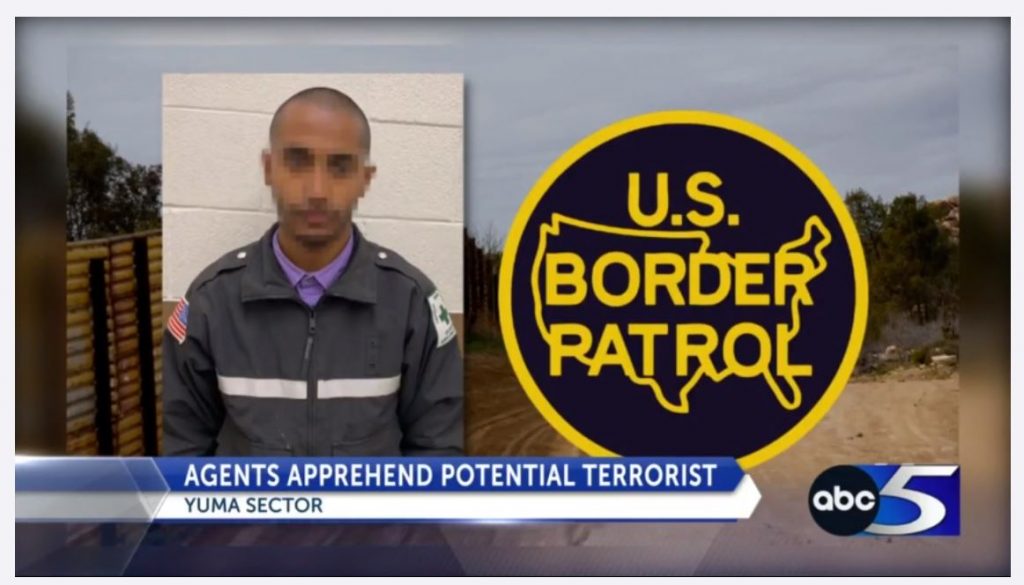 ……Known or suspected terrorists encountered at land, air, and sea borders are turned over to other federal authorities for investigation, Brandon Judd, the national president of the National Border Patrol Council, told the Washington Examiner Monday afternoon.

“When we apprehend somebody from a special-interest country, in all cases we immediately notify [Immigration and Customs Enforcement Homeland Security Investigations] and [Federal Bureau of Investigation]. HSI and FBI then determine what is done with that individual,” Judd said. “We have no contact with that individual unless the FBI and HSI determine they are not going to take him. If they don’t take him, then we’ll process them as normal.”

In August, the outgoing national Border Patrol chief, Rodney Scott, told agents they were catching people from the Terrorist Screening Database “at a level we have never seen before.”

This type of incursion is nothing new. When the pucker factor at the airports got so tight you could hear it squeak, Ahmed, Mohammad, and every other terrorist Islamic shitbag decided to join the Mexicans, Hondurans, Guatemalans, Salvadorans, et al, in traipsing right through the path of least resistance.

Muzzie terrorists have been caught at the border for years, but God only knows how many succeeded in getting in.