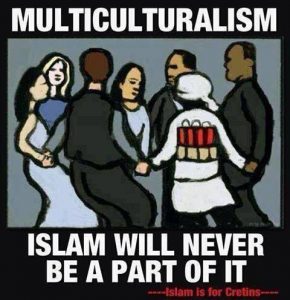 From The Daily Caller.

The Baltimore mosque Obama has chosen as the first U.S.-based mosque to visit during his presidency has deep ties to extremist elements, including to the Muslim Brotherhood.

The White House announced on Saturday that Obama will visit the Islamic Society of Baltimore (ISB) on Wednesday. He has visited several mosques overseas as president but has resisted visiting one in the homeland. The purpose of the trip, according to the White House, is to “celebrate the contributions Muslim Americans make to our nation and reaffirm the importance of religious freedom to our way of life.”

But ISB is a curious choice for Obama’s first domestic visit.

The mosque is a member of a network of mosques controlled by the Islamic Society of North America (ISNA), a Muslim civil rights group named as an unindicted co-conspirator in the 2008 Holy Land Foundation terror case. Several executives with that organization were convicted of sending money to aid the terrorist group Hamas.

An imam who served at ISB for a total of 15 years has also been a leading member of the Muslim Brotherhood network and has worked for an Islamic relief group that was designated as a terrorist organization by the Treasury Department in 2004.

After leaving Baltimore, el-Sheikh served as imam at the infamous Dar al-Hijrah Islamic Center in Falls Church. That mosque has a lengthy roster of known terrorists and terrorist sympathizers. Its imam during much of the 1990s was Mohammed al-Hanooti. He was named an unindicted co-conspirator in the 1993 World Trade Center bombing, which killed six people.

Dar al-Hijrah came under the control of Anwar al-Awlaki in 2001. He’s the American al-Qaeda recruiter who was killed in a U.S. drone strike in 2011. Nidal Hasan, the U.S. Army major who killed 13 people at Fort Hood in Nov. 2009, is said to have attended the Virginia mosque when al-Awlaki served there. The pair also reportedly exchanged emails. Two of the 9/11 hijackers also attended Dar al-Hijrah during al-Awlaki’s tenure.

El-Sheikh took over at Dar al-Hijrah in Aug. 2003, a little over a year after al-Awlaki left. While there he defended Palestianian suicide bombings against Israel.

“If certain Muslims are to be cornered where they cannot defend themselves, except through these kinds of means, and their local religious leaders issued fatwas to permit that, then it becomes acceptable as an exceptional rule, but should not be taken as a principle,” he said in 2004, according to a Washington Post article at the time.

They don’t worship their ‘religion’ in peace. Their koran proscribes the exact atrocities and violence they carry out every day, especially the systematic Islamic-inspired hate crimes and terrorist attacks against Westerners in Europe and the United States.  Just making fun of the muslim ‘Prince of Peace’ gets you killed, likewise advocating free speech.

They also have good occupational experience at torture, mutilation, and gratuitous executions.

The Islamofascist presence in America has reared its ugly head. Al Qaeda holds Death To The West conferences in  Chicago, and Jamaat Al Fuqra terrorists have established training centers across the United States. The Muslim Brotherhood, the Arab-American Action Network, and CAIR, three major facilitators of Islamic terrorism, operate freely in America.

Dearborn, Michigan has become quite a muslim extremist operating base, with Islamic jihad centers and mosques that are breeding grounds for terrorism.  The main mosque in Dearborn, the Islamic Center of America, is run by Imam Sayed Hassan Al-Qazwini, who has considerable ties to Hezbollah. He invited Nation of Islam’s lunatic Louis Farrakhan to speak, and openly advocates terrorism.

In Dearborn Heights, muzzie Khalil Abu-Rayyan, was arrested after Federal authorities watched him plan an attack on a local church.

The history of Islamic-based attacks against Americans on American soil is lengthy and becoming more frequent.

Islam is diametrically opposed to every Constitutional principle on which this country was founded. Under the muzzie point of view, Sharia Law trumps all other laws. It’s meant to overtake and replace all Western civil, criminal, and government jurisdiction. The founding principles of this country did not hinge on a violent ideological theocracy that advocated the deaths of those who didn’t hold the same religious beliefs. What the hell are any of them doing here?  They have no damned business being in this country. Letting them thrive here is suicidal.

Obama has a habit of pandering and accommodating terrorists in the White House.

The United States is saddled with an anti-American shitbag who believes it’s his job to promote Islam.

He’s comfortable with it. He was raised around muslims in Indonesia, (it’s a ‘part of him’) his half brother is muslim and has ties to the Muslim Brotherhood, and his father was muslim. Add to that, his saturation in communist ideology thanks to his mother and his mentor, Frank Marshal Davis, and you have the makings of a seriously flawed malfeasant.

The most sickening thing about this is that there is an absolute traitor sitting in the White House who gives financial aid and weapons to an enemy who wants us dead.  We’re at war with these muzzie pigs and all he can do is address “their grievances” and suggest job opportunities as if they were simply juvenile delinquents.

When Bowe Bergdahl deserted his post and defected to the Taliban, Oama’s reaction was to make a speech in the Rose Garden flanked by Bergdahl’s Taliban-schmoozing  parents, slobbering over him as if he were just a misunderstood kid. Then he let free some of the worst Taliban cutthroats in GITMO in exchange for a sack of shit who has no remorse for collaborating with the enemy.

Obama’s moral relativism and the fact that he’s a craven douchebag who thinks we should play patty cake with an enemy who wants to establish a new Caliphate in America, proves he’s the biggest threat to national security we’ve got.