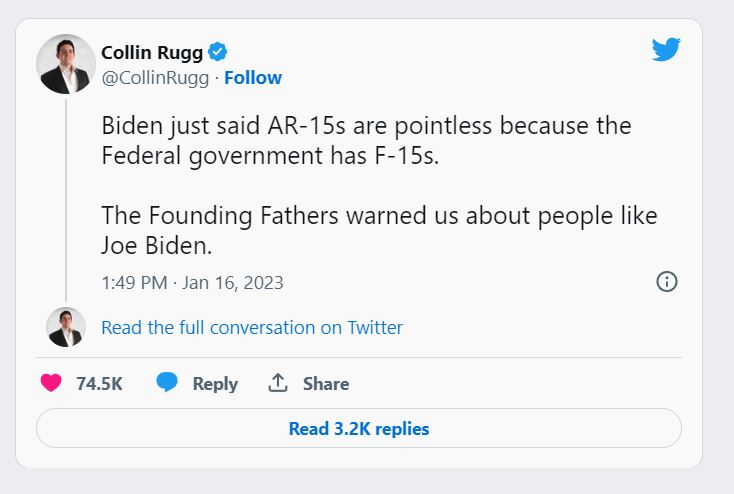 In 1787, Thomas Jefferson wrote a letter to John Adams’ son-in-law and defended the right to bear arms.

Jefferson famously wrote about America’s brave Soldiers, saying, “The tree of liberty must be refreshed from time to time with the blood of patriots and tyrants. It is it’s natural manure.”

Fast-forwarding to 2023, Joe Biden made a mockery of Jefferson’s quote and the brave men and women who fight to sustain the “tree of liberty.”

Biden began, “I love my right-wing friends who talk about the tree of liberty is watered with the blood of patriots.”

“If you need to work about taking on the Federal government you need some F-15s,” Biden continued. “You don’t need an AR-15.”

In contrast, Jefferson wrote, “What country before ever existed a century and half without a rebellion? And what country can preserve it’s liberties if their rulers are not warned from time to time that their people preserve the spirit of resistance?”

This isn’t the first time Biden has invoked the F-15 shit. During an August 2022 rally in Pennsylvania, Biden declared:

“For those brave right-wing Americans who say [the 2nd amendment] is all about keeping America independent and safe, if you want to fight against the country, you need an F-15. You need something more than a gun.”

In June of 2021, he said, “Those who say the blood of patriots, you know, and all the stuff about how we’re gonna have to move against the government. If you think you need to have weapons to take on the government, you need F-15s and maybe some nuclear weapons.”

The Army didn’t train me on an F-15, but I’ve been trained with firearms, “and something little more”, so I’m fine.
Molon Labe, motherfucker.