The liberal press lackeys threw him softballs and he still could hit any of them. 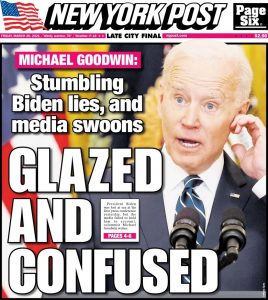 Biden referenced “cheat sheets” detailing key policy points and the identities of attending journalists when he conducted the first formal news conference of his presidency on Thursday.

In another photo, Biden was seen consulting a sheet that appeared to show the pictures and news outlets of journalists who attended his news conference. Some of the pictured reporters had a circled number next to their images.

Just 25 reporters were permitted to attend the press conference. Biden took a limited number of questions from a list of pre-selected reporters before leaving the podium. Fox News’ Peter Doocy was not among the reporters who were selected to ask a question.

Biden can’t string together a coherent statement even with a teleprompter and a cheat sheet. Of course, the liberal media still swooned over this feeble-minded geezer. They don’t have the decency to be ashamed.

He even had pictures of the reporters, their names, and who they work for so he would know which ones to call on. 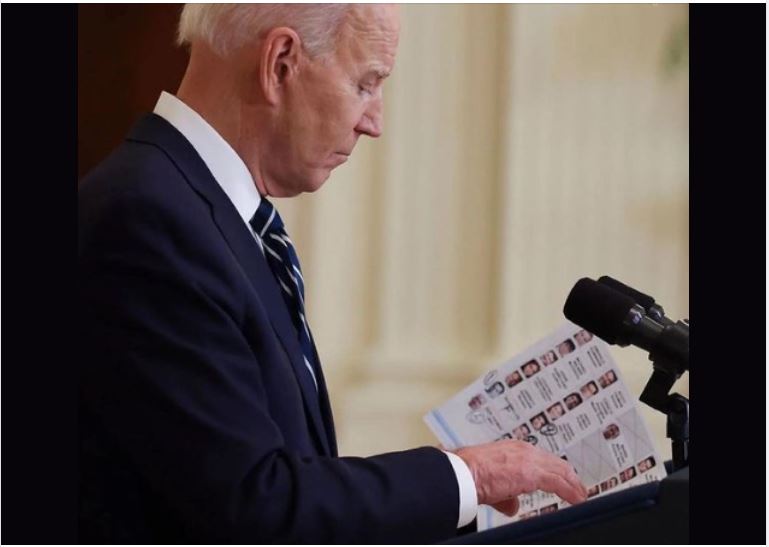 One of Biden’s former staffers recently admitted that he’s losing his cognitive abilities.

Biden’s mental state is clearly unstable.  His signs of dementia have been apparent for a while.

He compared victims of domestic violence to the “man rape”  in the film Deliverance.

He told a newly-sworn in female senator, “Spread your legs, you’re going to get frisked”. The look on her husband’s face says it all. He walked away immediately after the picture was snapped.  Fuckin’ Biden. What a scumbag.

He told a group of supporters in Danville, Va that, ‘Republicans are gonna put y’all back in chains’.

He ranted about “rape” and Bush “burning down houses” during a speech pushing Obama’s tax-raising ‘jobs bill’.

He called his sister a “girl-boy,” meaning a tomboy, and then explained that girl-boys are softer than “girl-girls.”

During a Sept. 12, 2008, speech in Columbia, Mo., Biden called for Missouri State Sen. Chuck Graham, who is wheelchair-bound, to “stand up.”

He had bizarre ideas about Obama’s jobs bill and rape fantasies.

He told a NASA  engineer that ‘Indian Americans are taking over the country’.

In all likelihood, he’ll either keel over from a heart attack or stroke, or he’ll become so mentally incapacitated that the embarrassment will be too much even for the Dems. Unfortunately, his commie VP Kammy Harris is next in line, but we’ll fight that bitch every step of the way. Either way, get ready for a circus on an epic scale.

Someone should put a resignation on his desk, After all, he signs anything put in front of him.