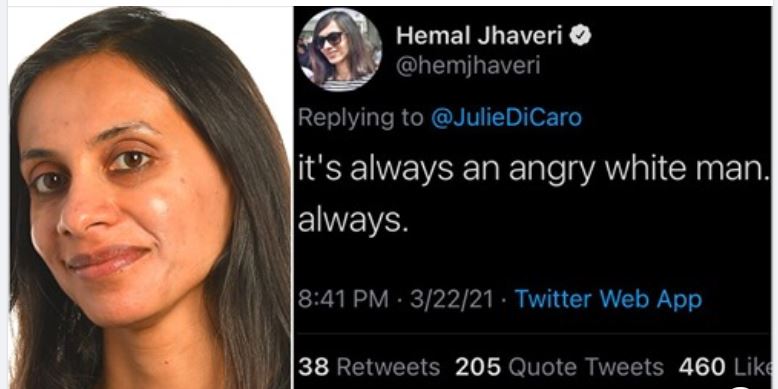 Except when it’s a muzzie on a jihad.

A ‘race and inclusion’ editor was fired by USA Today after she falsely blamed the Boulder supermarket shooting on white people.

The gunman was named the next day as 21-year-old Ahmad Al Aliwi Alissa, a migrant from Syria.

“Hi friends. Some news,” tweeted Jhaveri earlier today. “I am no longer working at For The Win and USA TODAY. Here’s what happened.”

……In Jhaveri’s world, “racial equality” apparently means blaming an entire race of people for the actions of one violent Islamist.

However, Jhaveri thinks that her firing wasn’t specifically in relation to that tweet, but to others in which she was “publicly naming whiteness as a defining problem.” She also referenced a 2017 tweet in which she called out “a reporter’s white privilege” as another reason for her dismissal.

“My previous tweets were flagged not for inaccuracy or for political bias, but for publicly naming whiteness as a defining problem,” Jhaveri said. “That is something USA TODAY, and many other newsrooms across the country, can not tolerate.”

The now unemployed journalist also claimed she was the victim of racist “microaggressions” carried out by “majority white” USA Today staff during her 8 year run with the media outlet.

Jhaveri also complained about a standards and ethics meeting in which an editor “argued it was OK to deadname transgender people” (the horror).

“I could go on,” Jhaveri said. “Over almost 8 years, plenty of incidents have piled up.”

“This is not about bias, or keeping personal opinions off of Twitter. It’s about challenging whiteness and being punished for it,” Jhaveri wrote.

“Like many places, USA TODAY values ‘equality and inclusion,’ but only as long as it knows its rightful place, which is subservient to white authority,” she added.

By the sounds of it, I’m sure everyone at USA Today will sorely miss Jhaveri’s “inclusive” presence.

Jhaveri wasn’t the only journalist to let slip anti-white racism in the aftermath of the shooting – literally countless others posted similar tweets.

The anti-White bigots had to scramble to delete all of their Tweets and comments when they realized the shooter wasn’t a “white supremacist”.

“Whiteness” is on the minds of fragile liberal minorities all the time. Whitey is responsible for everything from their personal failures to their crimes. And all the world’s problems, to boot.  Throwing the race card and practicing victimology is so much easier than personal accountability.