……This was an amazing eyewitness report that has been ignored by the fake news media because it does not fit their narrative.  A black Trump supporter was gassed with clouds of pepper spray, pushed down, and then nearly trampled to death as police officers continued to push Trump supporters on top of a pile of people outside the US Capitol.

Anderson described how Rosanne Boyland was the first woman killed by Capitol police that day. 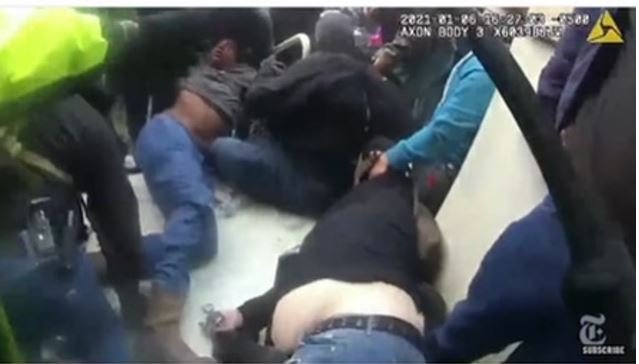 This photo shows Philip Anderson nearly unconscious being dragged away by Trump supporters after being crushed under a pile on Jan. 6. Roseanne Boylan was next to him when she died.

Philip Anderson fell and was being smothered as police officers continued to push Trump supporters on top of him.  Philip told The Gateway Pundit how he was holding Rosanne’s hand when she died.

A second eye-witness also contacted The Gateway Pundit following our interview with Philip and confirmed his account.

This is the second murder that day by Capitol Police that was given a pass.  Lt. Mike Byrd was exonerated after he shot Trump supporter Ashli Babbit in cold blood inside the US Capitol that day.  Investigators did not even interview Byrd before he was exonerated.

……It is now clear — If you are a Capitol Police Officer you can kill Trump supporters at will.  You will be excused.

Biden’s corrupt weaponized government goons have engaged in the systematic bashing of civil liberties using the 6 January protest as justification for their authoritarian reign of terror, and in some cases, murder.

Lila Morris, Harry Dunn, and Aquilino Gonell,  are the capitol cops who brutally beat Rosanne Boyland to death. None of them were charged.   Michael Leroy Byrd—the capitol cop who murdered Ashli Babbitt the same day—, is also walking around scot-free.  Byrd was investigated in 2019 for leaving his service weapon laying unattended in a Capitol bathroom. The firearm was Byrd’s service Glock 22, the same style weapon that was reportedly used to murder Babbitt.