Another capitol cop exposed for murder.

Jonathan Mellis, 35 years old and already an old timer at DC Gitmo, has emerged as an activist from within its walls.

Mellis has assisted The Gateway Pundit in obtaining letters from all of his fellow J6 detainees as we continue to expose the truth about the political persecution of January 6th.

“We have to get their stories out. They are good men and need help,” said Mellis. “It breaks my heart to see them suffering and losing hope. It’s been over a year since January 6th and still no trials. Sometimes we feel like we will die in here.”

Mellis’ case is of special interest to the public because his trial can finally expose the truth to the world about how Trump Supporter Roseann Boyland really died and the violence of Capitol and DC Metro Police that day. According to the Defendant’s “Motion for Reconsideration of Pretrial Detention”, his actions were in response to witnessing the “plight of Roseann Boyland”. On a side note, Mellis was also seen protecting Officer Michael Fanone, who has since retired from the police force to join another government agency called CNN.

“Fanone is a liar,” said Mellis. “There is video in discovery regarding Fanone that the world need to see that proves he is a bad man. My trial can show that.”

According to J6 attorneys, the DOJ continues to pressure these men into taking ridiculous pleas deals to avoid trails that will show what really happened on January 6th and just how evil they are for persecuting these men with little evidence.

Mellis has been charged with attacking a police officer, specifically Lila Morris, the officer seen brutally beating Rosanne Boyland who died that day. We exclusively reported on the Gateway Pundit that Boyland did not die from a drug overdose like the mainstream media and DC Coroner reported. Multiple witnesses have emerged that say she was killed by police brutality and many of the men incarcerated in DC Jail right now say they were defending her and Victoria White (another woman severely brutalized by police).

“When I go to trial, I plan on exposing Police Officer Lila Morris and what she did to my fellow patriot Roseann Boyland,” said Mellis. “I am being accused of assaulting Officer Morris after this police woman was seen brutalized Rosanne’s body. So my trial will show the world what a monster she is.”

……These incidents all occurred around the time a DC Metro Police Officer was seen beating the bloodied unconsious body of Rosanne Boyland (she died) and in proximity to the brutal beating of Victoria White. The majority of these men have no violent history, and “Back The Blue”. What would make patriotic men like these swing hockey sticks and bats and hurl objects in the direction of a police line?

“This never happened at a Trump rally before, so why now?” asked Tina Ryan of Citizens Against Political Persecution. “We now know the truth. The police were attacking defenseless women and Trump supporters. Period. These men were provoked and defending others. The question is, did the police act on their own accord or was there a directive from above that police antagonize the crowd?”

……According to Mellis and other prisoners, there are videos they have seen as part of their discovery that are under “court order”, which means the public cannot see them (and possibly never will). These videos show incredible violence on the part of police as they antagonized Trump supporters, seemingly provoking peaceful crowds to become agitated.

DC Police refuse to penalize or acknowledge any wrongdoing on the part of Morris. She was seen allegedly beating someone who died, but like Ashli Babbitt’s killer Lieutenant Michael Byrd she has yet faced no consequences. She continues to enjoy her freedom and “celebrity status” as a January 6th police officer. Compare this to men like Jonathan Mellis who tried to defend the actual dead woman this police officer sadistically brutalized- he is locked up for assaulting this violent police officer. He has lost everything and is rotting away in prison facing up to 40 years behind bars.

……Unfortunately the mainstream media refuses to pick up Roseann Boyland’s name even though there is video to substantiate her brutal beating by Police Officer Lila Morris around the time of her death on Capitol stairs. 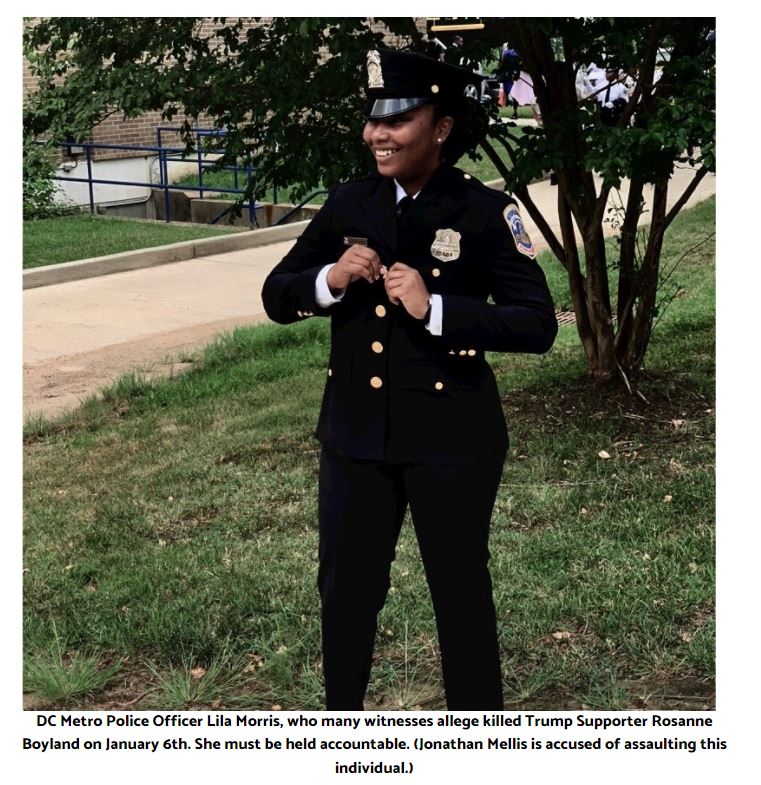 Harry Dunn, and Aquilino Gonell, are the other capitol cops involved in the murders of Rosanne Boyland:

For months, the Justice Department has kept under seal at least 14,000 hours of surveillance video captured by Capitol security cameras on January 6. Merrick Garland’s office successfully argued in court that the recordings are “highly sensitive” government material and every clip used as evidence in Capitol cases is concealed by a protective order. Discovery has been intentionally delayed to prevent defendants and their lawyers from seeing the secret footage.

Time, however, is running out for Garland’s prosecutors. Joseph McBride, the attorney representing defendant Ryan Nichols, recently viewed three hours of surveillance video recorded by security cameras inside the tunnel. What McBride describes in his filing based on that footage is a sustained and brutal assault by police officers against Capitol protesters, something his client, a Marine and longtime rescue volunteer, attempted to stop.

One officer in particular, a D.C. Metro police supervisor referred to as “white shirt” in McBride’s motion, repeatedly beat protesters with a baton and his fist. “White-shirt beats the woman with his baton striking her eight times in six seconds,” the footage video shows, according to McBride. “White-shirt punches the woman in the face, with his left-hand, landing five punches in five seconds, with all of his might. Another officer joins in and starts beating the woman in the head with his baton, landing twelve strikes in seven seconds.” (It does not appear that the woman in this account is Rosanne Boyland.)

“The supervisor (we call him “white shirt”) takes his baton and starts spearing the woman in the eye with it,” Geyer wrote on Twitter. “Jamming her with full force in the face. She turns her head and he jams the back of her head and ear. He then is punching her in the face. She is literally being beaten in a sick, sadistic manner that frankly shocked me as someone who was in [law enforcement] for 21 years.”

(Both Harrelson and Nichols are incarcerated in the D.C. jail under pretrial detention orders)

Outside the tunnel, around the same time, Boyland’s lifeless body was lying on the ground while her friend screamed for help. “She’s dead! She’s dead!” Winchell cried. McBride explains what happened next. “Roseanne (sic) Boyland’s body is dragged into the tunnel at 4:30 p.m., and is never seen again.”

Her body, however, was seen after that point by at least two men: Capitol police officers Aquilino Gonell and Harry Dunn. 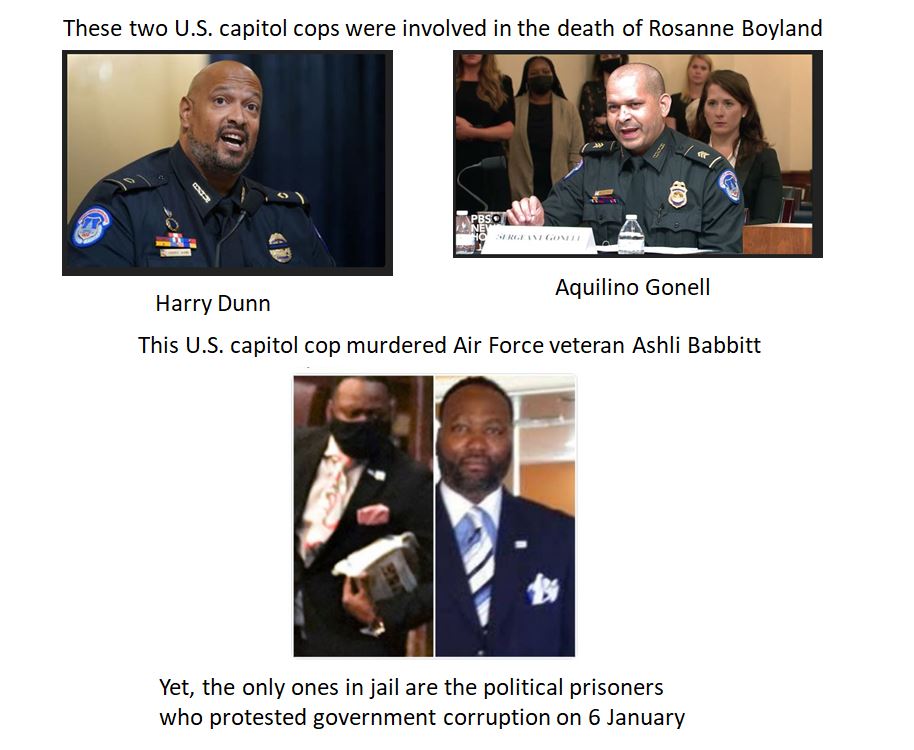 Michael Leroy Byrd—the capitol cop who murdered Ashli Babbitt the same day—, is also walking around scot-free.  Byrd was investigated in 2019 for leaving his service weapon laying unattended in a Capitol bathroom. The firearm was Byrd’s service Glock 22, the same style weapon that was reportedly used to murder Babbitt.

In contrast, George Tanios, the man wrongly accused of causing the death of capitol police officer Brian Sicknick has had his life turned upside down by government goons.

Since 6 January, FBI gestapo targeted an innocent man for attending President Trump’s 6 January rally, raided the wrong home in Alaska looking for Nancy Pelosi’s laptop, arrested a man for standing inside the capitol and waving a Trump banner, confiscated a Lego set from an “insurrectionist” and asked that citizens turn in their “extremist friends and relatives“.

The home of Thomas Caldwell, a former lieutenant commander in the U.S. Navy, was raided by 20 Feds who physically assaulted him, threw him into the back of a cruiser and hauled him off to jail. His crime? Supporting the protest. Caldwell never entered the Capitol building, has no criminal record, and honorably served the country for 20 years in the military, but Judge Joel Hoppe agreed with the government to keep him behind bars. “The conduct and the statements of Mr. Caldwell . . . it really just is pure lawlessness and contempt for laws of this country,” Hoppe said, referring to some of Caldwell’s Facebook posts and texts.  In other words, speak out against government corruption and be sent to the gulag.

The imprisonment of the 6 January protesters who are being held without due process while Antifa and BLM thugs skate out of the consequences of their violence. The Feds refuse to prosecute. Their only crime was to demand accountability from the hallowed halls of corruption. They are Biden’s political prisoners.  They have been beaten and attacked by the jail guards who make then endure Shawshank conditions.  The FBI’s role in the protest, including the infiltration of informants has been covered up.  The sham 6 January ‘committee’ refuses to acknowledge the police brutality against peaceful protesters.

The thugs in the capitol police department committed violent assault and battery and murder on 6 January 2021 and none of the shitbags responsible will be held accountable.

American political prisoners have been held for more than 5 months in solitary confinement in 7X10 cells for 23 hours a day. These people have not been convicted of any crimes, they are being held in “pretrial detention” for trespassing the capitol halls of corruption on 6 January 2021. Their trials have not been set. They have been denied bail. They are not allowed to meet with lawyers in private. They have one hour a day for “exercise”, showers, and phone calls. They have been denied due process.

The Dems have created a system of bullying and persecution of political opponents. This shit usually happens in Communist countries and Banana Republics. Now it’s happening here.