From The Wall Street Journal

For a man who stood at the White House in September 2015 and promised not to militarize the South China Sea, Xi Jinping is sure doing a lot of militarizing.  Satellite photos released Thursday indicate China has deployed powerful antiaircraft and antimissile systems to all seven of its new artificial islands in the Spratly archipelago, along shipping lanes that carry $5 trillion in trade a year. This is a “massive military complex,” as Donald Trump noted recently, and it’s worth detailing how massive.

Three years ago these were only specks of land, some submerged at high tide, but China has since built 3,000 acres of territory. (The flight deck of the newest U.S. aircraft carrier, the USS Gerald Ford, is only 4.5 acres.) This is more space, with more potential military value, than China would need simply to face down its smaller neighbors—suggesting that, as U.S. Navy Commander Thomas Shugart wrote recently, “China perhaps has a larger foe in mind.” 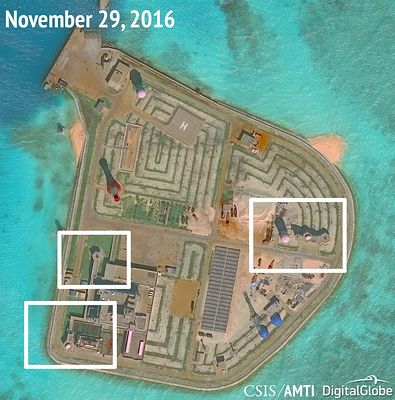 As Commander Shugart wrote at the website War on the Rocks, three of China’s artificial islands are comparable in size to typical fighter bases in mainland China, with facilities that could be large enough for an entire fighter division of 17,000 personnel. Subi Reef now has a harbor bigger than Hawaii’s Pearl Harbor, and the aptly named Mischief Reef has a land perimeter nearly equal to Washington, D.C.’s.

That’s enough space to deploy, hide and defend mobile missiles that would threaten targets across the South China Sea, the Philippines, Malaysia, Singapore and beyond. The boost to China’s already formidable “anti-access/area-denial” capabilities will be substantial. If Beijing also deploys floating nuclear-power plants to the area, as it intends, then its military facilities would be even more likely to become permanent fixtures on the East Asian map.

So it’s significant that, as the Center for Strategic and International Studies said in releasing its satellite images, Beijing has equipped its artificial islands with antiaircraft guns, targeting radar for guiding missiles and other weapons, and close-in weapons systems for defending against cruise-missiles. “We did not know that they had systems this big and this advanced there,” said researcher Greg Poling. “It means that you are prepping for a future conflict.”

The Philippines expressed “serious concern” through a spokesman Thursday, but President Rodrigo Duterte remains in an appeasing mood toward China. Indonesia in a first joined this week with India in urging China to respect the international Law of the Sea. Vietnam has begun to harden its modest defenses on the Spratly features it controls. It deployed mobile rocket launchers in August, an understandable response that nonetheless raises the risk of accident or miscalculation.

All of this means Donald Trump will soon take office facing a daily risk of hostilities over islands that didn’t exist when President Obama was last sworn in. “We will not allow the shared domains to be closed down unilaterally—no matter how many bases are built on artificial features in the South China Sea,” U.S. Pacific Commander Admiral Harry Harris said in Australia on Wednesday.

The United States had better start taking the threat from China seriously.

The Chinese have engaged in cyber attacks, spying, economic espionage, and actual threatening of U.S. Naval vessels. Yet Obama and the Feds think giving them money, technology, and contributing to the Chinese threat are good ideas.

Just some reminders of how batshit crazy that is:

China announces that its nuclear submarines can hit the U.S. with missiles.

More on our own government’s treason:

The United States owes about $1.2 trillion to China.

American companies who do business with China  help fund the military buildup.  In turn, China arms North Korea and Iran.

A senior Chinese officer declared that China should ‘topple U.S. dominance’. Whether China can actually pull this off is a matter of great debate, but the fact that they have their claws sunk so deeply into us economically, should be a wake up call.

Propping up a communist totalitarian regime with capitalist dollars is suicidal. China is an enemy and should be treated as such instead of having the privilege of being a business associate.  Doing business with a communist country will not transform it into a freedom-nurturing society. There will come a day when all of the money we pour into China will come back to bite us in the ass. You can bet on it.  I just hope by then that we have a President and a country with the balls not to back down.