You know it’s bad when your fellow Progs think your policies are shitty. 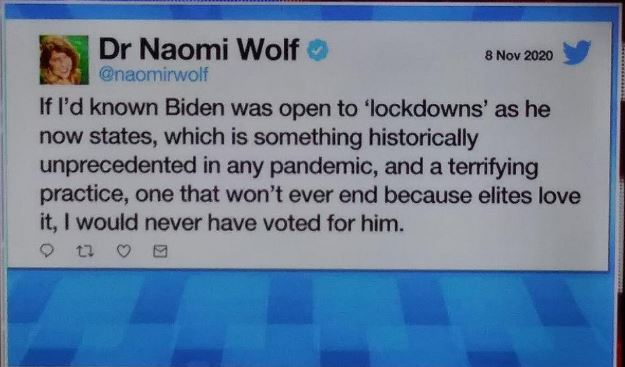 Former advisor to Bill Clinton and author, Naomi Wolf, was on Tucker Carlson’s Show on FOX News on Monday night. Naomi warned that under Biden America was becoming a ‘totalitarian state before our eyes’.
Of course, this is true, and even a Bill Clinton advisor can see it.  Wolf shared:

“I’ve been writing for months and months about what I see as the terrible crisis that we’re in, that we have to recognize under the guise of a real medical pandemic.  We’re really moving into a coup situation, a police state situation and that’s not a partison thing, that’s, as you say, that transcends everything you and I might agree or disagree on that should bring together left and right to protect or Constitution.  We’re absolutely moving into what I call step 10.

I wrote a book in which I pointed out there were 10 steps that would-be tyrants always take when they want to close down a democracy.  Whether they’re on the left or the right they always do the same 10 things and now we’re at something I never thought I’d see in my lifetime.  You described it really, really well.  It is step 10 and that’s the suspension of the rule of law, that’s when you start to be a police state and we’re here, there’s no way around it.”

Obama pulled the same shit with breaking the law and trampling the Constitution. Why didn’t she bitch about that?

Come to think of it, as Bubba Clinton’s former advisor, she should have been pretty concerned over his corruption as well.

Dems have no respect for American citizens, the Bill of Rights, or the Constitution. Current and former government officials are calling us “domestic terrorists” to justify their own extremist ideology.

The Dem Party is the biggest hate group on the planet. They push mob violence as long as it serves their ideology, which is primarily against Trump supporters.  DemLeft extremists have upped the ante.

Biden is simply picking up where Barky left off.