Way to go Biden.  Someone actually took your “MAGA Republican extremists” rhetoric to heart, and now an innocent 18 year old kid has been murdered because of it. I’m sure this makes you very happy.

Joe Biden said MAGA Republicans were a threat to our nation. These freedom-loving patriots, who only want a government that works for them, better trade deals, more jobs, and fewer taxes, are a clear and present danger that must be crushed. And yet, we’re not the ones killing people over political disputes. That would be the Democrats. The Left used the January 6 riot to smear Trump supporters as violent insurrectionists. Still, only one person was killed inside the Capitol Building, Ashli Babbitt, whose officer-involved death continues to be plagued with lingering questions. Those inquiries will remain, but one act of political violence will probably go under the radar due to its location, but that doesn’t make it less relevant given the war cry bellowed by Biden.

In McHenry, North Dakota, a 41-year-old man allegedly ran down an 18-year-old teenager over a political dispute, killing him. He was reportedly drunk at the time of the attack. To make things more bizarre, the alleged perpetrator called the police on himself and admitted to killing the North Dakota teenager. He is held on $50,000 bail since he claimed he wasn’t a flight risk as if that means anything in a potential homicide investigation. The victim reportedly called his mother before his death, asking for help as he noticed the man chasing him down (via Grand Forks Herald):

“Prosecutors allege moments before he was killed, 18-year-old Cayler Ellingson called his mom to come rescue him because 41-year-old Shannon Brandt was chasing him in the city of McHenry, where the street dance had just wrapped up.

By the time she could get there, her son was dead.

Brandt was officially charged Monday with vehicular homicide and leaving the scene of a deadly accident.

Court papers show Brandt called 911 around 2:30 a.m. Sunday and told the 911 dispatcher that he just hit Ellingson, claiming the teen was part of a Republican extremist group and was calling people to come get Brandt after a political argument.

Ellingson’s mom told police her son called her just before the crash, asking if she knew Brandt, which she does. She does not believe her son knew him.

“We are still trying to determine what, exactly, transpired at the time of crash and prior to that as well,” explained Niewind.

Police say Brandt was drunk when he hit and killed Ellingson with his SUV.

“We do not know of any witnesses. We are still making attempts to interview potential witnesses from the street dance, people that were present prior to the crash happening,” Niewind said.”

A loser twice the victim’s age couldn’t handle a political argument, so he allegedly killed him. That sounds like a rational individual. Whether they live in cities or rural America, the Left is just unspooled.

After the murder hit the news, the Left was ecstatic. 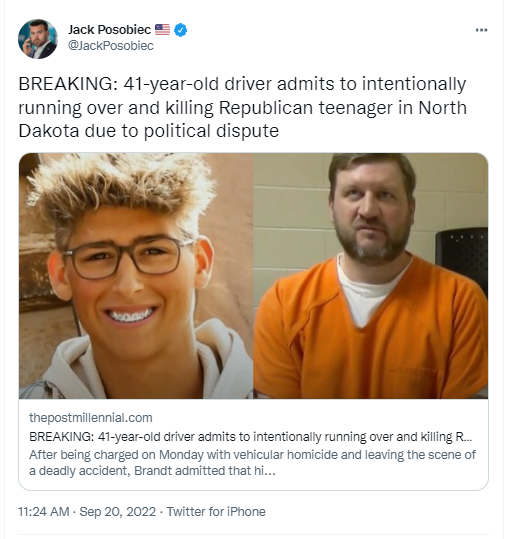 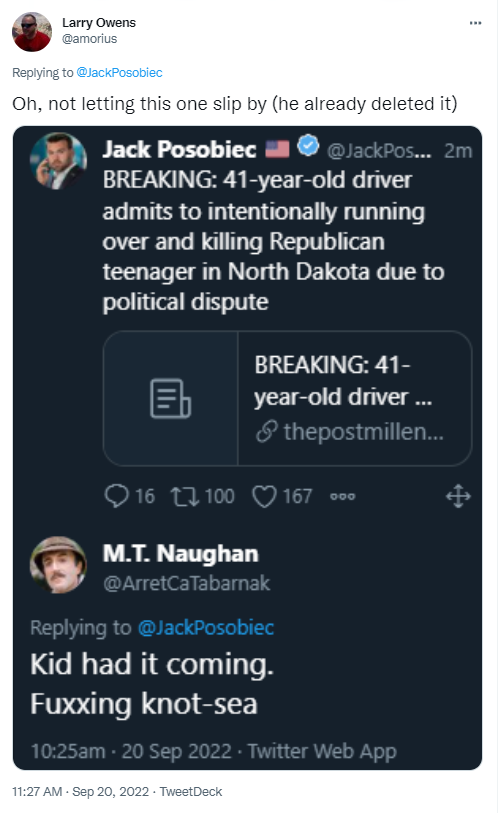 When the Left can’t get their way, they resort to violence.