Andrew Pollack — the father of Meadow Pollack, who was murdered in the 2018 Parkland, Florida, high school shooting — said he was “so angry” after learning of Tuesday’s elementary school shooting in Uvalde, Texas, because it could have been prevented.

As Democrats, including  Joe Biden, have tried to use the tragedy that resulted in the deaths of 21 people to once again argue for more gun-control laws, Pollack countered that is not the answer.

“We shouldn’t be focusing on gun control now. Parents should be focused on what they can do. They could learn and educate themselves,” he told Fox News Wednesday.

“We should be looking at what we can be doing to fix these things in schools. A single point of entry. How did the intruder get into the school? It should be locked down. We need school resource officers. And it’s just terrible to think that this was all avoidable,” Pollack further stated.

The Floridian also tweeted a simple three-point plan to make the schools safer, offering what is needed is 1) an armed guard; 2) a single point of entry; and 3) teacher training. 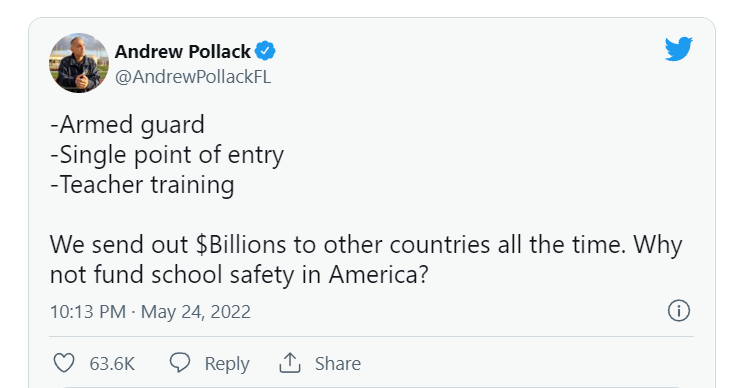 ……Further, it would seem the school resource officer should be close to the single point of entry during school hours.

On Tuesday night after the shooting, Pollack told Fox News host Laura Ingraham, “I’m so angry that I’m practically shaking right now at what happened, at what these parents have to deal with.”

“Even a single point of entry would have prevented it. … This didn’t have to happen today,” he added.

……What sort of evil, darkness or mental illness got into his heart that could allow him to pull the trigger over and over, killing young children at point-blank range?

It’s the same kind of evil that caused a driver to purposely plow into people at a holiday parade in Waukesha last fall.

It’s a blatant disregard for human life.  Stricter gun control laws will not solve that, or they would have already done so in places like Chicago, where hundreds have already been murdered this year.

It’s a fucking shame that American schools have to transform into armed fortresses. Most of the problem starts at home. Parents can’t control their spawns and society suffers the consequences.