Fucking cowards. It’s their job to confront the bad guys.

This sums it up:

A Texas state police official said officers outside the Uvalde school where a gunman slaughtered 19 fourth-graders and two teachers Tuesday waited for backup to engage the shooter because they feared “they could’ve been shot.”

Texas Department of Public Safety Lt. Chris Olivarez said in a Thursday interview with CNN that the first few officers who entered Robb Elementary School after 18-year-old shooter Salvador Ramos were met with gunfire and retreated to avoid being shot and killed.

Local and state police outside Robb Elementary School waited for a specialized US Border Patrol tactical team to arrive and take out Ramos nearly an hour after he began his killing spree.

Ramos had locked the door of the classroom where he killed all 21 victims, and officers weren’t able to get inside until a school staff member gave them a key, the Associated Press had reported.

……Dozens of parents arrived at the school while Ramos was still inside and begged officers waiting outside to charge the building.

Ever hear of breaking windows and doors?

Police stood by for upward of 40 minutes after a gunman stormed into an elementary school in Uvalde, Texas, on Tuesday and killed 19 children and two teachers in a classroom, according to a new report.

Investigators are piecing together what happened over the course of the massacre, which ended with a Border Patrol team rushing in and killing the 18-year-old shooter. Witnesses cited by the Associated Press recalled shouting at police to enter the building to save the people inside. One even proposed having bystanders do the job that officers apparently refused to do as they stood outside.

……Raul Ortiz, chief of the Border Patrol, told CNN that more than a dozen on-duty and off-duty agents showed up to stop the shooter.

“They didn’t hesitate. They came up with a plan. They entered that classroom, and they took care of the situation as quickly as they possibly could,” he said. A member of the elite Border Patrol Tactical Unit, or BORTAC, has been credited with killing the shooter. The agent sustained a wound to the head after being grazed by a bullet and was shot in the leg but has been discharged from the hospital, U.S. Customs and Border Protection sources told the Washington Examiner’s Anna Giaritelli.

Thank God for the Border Patrol. Ramos would have killed everyone in that school before the fucking Uvalde cops did anything to stop him.

Texas Governor Greg Abbott said that he was misled about the police response at the Uvalde, Texas, elementary school shooting and is “absolutely livid” about it.
Gov. Abbott had previously praised the “quick response” from law enforcement, which we all now know, was not really the case.

It took over one hour to kill the shooter after local police held back a tactical team from Border Patrol and failed to breach the door and confront the killer as children died in the room.

Speaking at a press conference on Friday, Gov. Abbott said that he had previously repeated what he was told by law enforcement.

Gov. Abbott was asked about whether or not he had known about the decision not to breach the door where children were trapped inside with the shooter.

“I was on this very stage two days ago, and I was telling the public information that had been told to me [by law enforcement]” he said. “As everybody has learned, the information I was given turned out in part to be inaccurate. I was absolutely livid about that.”

Lead, follow, or get the hell out of the way.

This mom has bigger balls than the Uvalde cops:

As the media’s attention turns to police officers who stood outside a school in Uvalde, Texas, and refused to enter while a mass shooter killed 21 people on Tuesday, a mother is being hailed as a hero for going into the school to rescue her two children as the carnage unfolded.

According to a report in Thursday’s Wall Street Journal, Angeli Rose Gomez said she drove 40 miles to get her children at Robb Elementary School, where they’re in second and third grade, respectively.

Having found that police hadn’t entered the school, Gomez said she implored them to do something, was put in handcuffs by U.S. marshals, then convinced local police to get her freed.

After that, she jumped the school fence, ran inside the school, and escaped with her children, according to reports.

These Uvalde cops are just like the Broward Cowards. 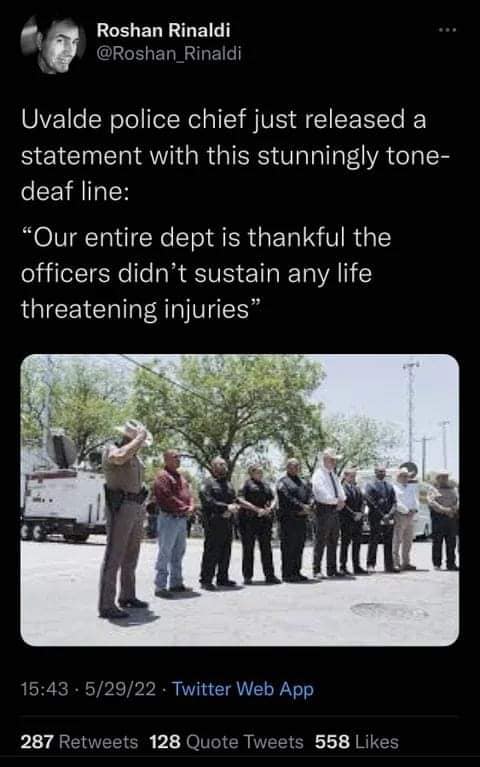 None of them are fit to wear a police uniform.