There’s a pattern here. That’s why the motherfucker tried to get away. He knew he was going to jail.

While the media tries to portray him as just a young, innocent kid, this is the side they won’t show: 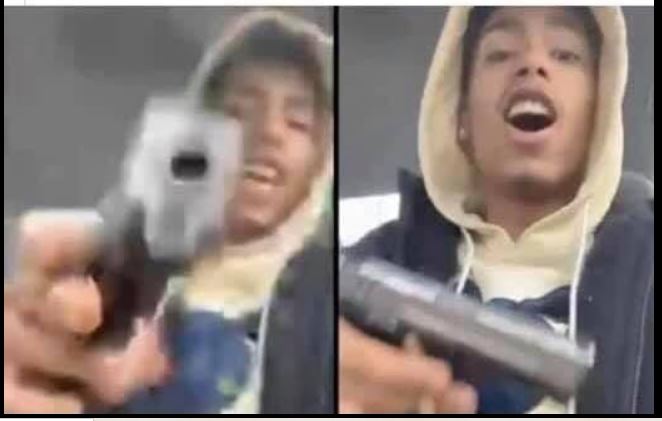 Daniel Horowitz at the Blaze

Here we have yet another example of a saintly youth needlessly shot dead by police simply because he was black.

That is the narrative the media wants you to believe about the Daunte Wright shooting, but the reality is that while the shooting was obviously a clear mistake, his criminal record and the fact that he was not behind bars are precisely why the police are now confronted by violent fugitives who either run or fight with them.

No, Daunte Wright was not just a young man living an upstanding life who wound up dead because the police pulled him over for an expired car registration or for an air freshener hanging from his rearview mirror. According to documents obtained by the U.K. Daily Mail, the outstanding warrant police were attending to after they pulled Wright over was for aggravated robbery at gunpoint.

According to charging documents, Wright was sleeping over at the house of a young woman after a party on Dec. 1, 2019, when he suddenly pulled a gun on her and demanded she hand over money she had obtained from an ATM. He proceeded to choke her and threaten to shoot her while she kneeled.

After he was arrested, Wright was released from jail after a bondsman posted $40,000 bond, but in July 2020, his bail was revoked by a judge when he was caught with a firearm, a violation of his bail, and failed to check in with his probation officer.

Wright is one of thousands of young males in every major city of this country who have become increasingly violent, successfully thwart the law, suffer few consequences, and thus feel invincible against law enforcement.

We often hear protests and hand-wringing over the fact that young men, black or otherwise, wind up dead because of “stupid crimes” or a traffic stop. But in almost every case, there is a reason for it. In a previous era, these people would have been behind bars, but recently our justice system keeps them on the streets. When police confront them, either to serve a warrant or often because of lower-level traffic stops, the criminals – either because of their violent nature or because they know they have reason to fear the law – explode. They fight because they are criminals and they know that police are now watched closely and treated as if they are the ones on probation.

Many violent career criminals are often caught committing low-level crimes. Cops approach them as if they are innocuous, just as in this case, where clearly the cops treated him just as anyone else pulled over during a traffic stop. But there’s something interesting about violent criminals who barely serve time for past offenses: They are not deterred from acting violent again. Cops never know when someone is going to turn violent on them.

Obviously, this particular case is anomalous, because the cop meant to fire the Taser after Wright resisted, but tragically picked up the gun, a reality borne out clearly by the bodycam video. But police are confronted with these situations more and more, which will trigger stress-related responses — appropriately or inappropriately — that get themselves or others killed.

……With woke judges refusing to hold almost any repeat violent offender and with few of them ever getting convicted and serving meaningful time, we will have more people like Raquan Wilson out on the streets. This is just one of endless examples, but a Brooklyn, New York, judge recently released Wilson on charges of illegal weapons possession, even though he had four open cases for packing loaded pistols and for armed robbery.

Just like Wright, Wilson, 19, had been charged with pointing a gun at someone’s head. At just 15, he was also arrested for attempted murder and then a slew of other crimes over the past two years, including one incident in which he allegedly pistol-whipped his victim in an armed robbery. All through the process, he was bailed out on extremely low bail and appears never to have served time in prison, despite breaking the condition of his bail in the most dramatic way imaginable.

Wilson was arrested a few weeks ago during a traffic stop and was caught in possession of a gun. Luckily for the cops, Wilson did not resist arrest, but his criminal record was never even brought up during his bond hearing by the woke judge or Soros prosecutor, and he is out again.

Like career criminal George Floyd, the only black lives that matter are the ones that can be exploited for political gain.

They kill their own every fucking day of the week and no one bats an eye.