Ruby Freeman and daughter and elections supervisor Wandrea “Shaye” Moss with Ralph Jones, the voter registration’s chief in Fulton County.  The three are suspects in the suitcase ballot fraud at the State Farm Center. via Yaacov Apelbaum

Earlier on Thursday Cristina Laila reported on the explosive video that was revealed during the Georgia ballot counting at the State Farm Arena where crooked Democrats pulled out suitcases full of ballots and began counting those ballots without election monitors in the room.

Trump’s legal team showed a video from the State Farm Arena tabulation center when poll workers were told to leave at 10:25 PM.

A few “workers” stayed behind and were seen pulling suitcases full of ballots out from under tables to be tabulated!

This was the most explosive video of the entire campaign season.

We later identified one of the operatives on Thursday night who was caught on video counting illegal ballots from a suitcase stashed under a table.

One woman in the center was wearing a purple top.
She later appeared in the suitcase video.
Her name is Ruby Freeman.

And her daughter Wandrea “Shaye” Moss was later identified as her supervisor who was helping cart out the hidden ballots in the suitcases to be counted after all of the GOP observers and media was sent home for a “water main” break.

It was all a fraud.

And here is a closeup of the woman in question via a Getty image.
Her official name is “Wandrea Moss.” 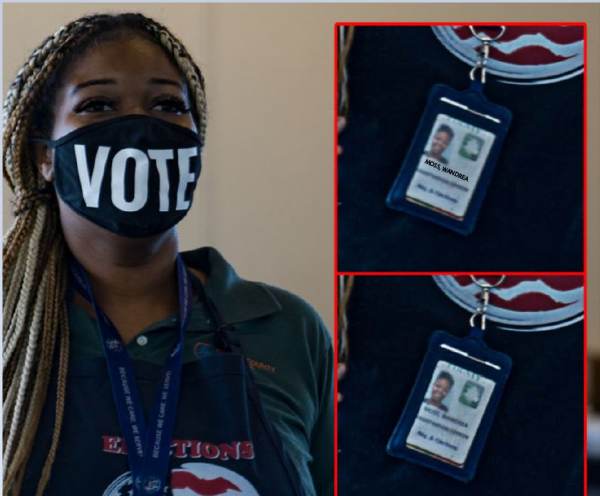 At first Ruby accepted the invitation. But then she declined the interview. She said she needed a lawyer.
Good idea.

Throw the book at the bitch and anyone else who engaged in some of the worst voter fraud and ballot tampering in history. They all need to be indicted.

1 thought on “Georgia Voter Fraud Perp: “I need an attorney””