With Dr. Anthony Fauci’s announcement this week that he will be stepping down from his government roles in December, Republicans have been quick to respond with plans of investigation into Fauci. One senator has already requested that all records related to him be preserved.

On Monday, Fauci officially announced that at the end of the year he will leave his role as head of the National Institute of Allergy and Infectious Diseases as well as his job of advising the White House as its chief medical advisor.

In that vein, Republican Senator Roger Marshall of Kansas wrote a letter to Xavier Becerra, head of the U.S. Department of Health and Human Services, requesting that “all records and information related to Dr. Anthony Fauci and Dr. Francis Collins” be preserved.

“I write with this official notice for you to immediately take steps to preserve all records and information related to Dr. Anthony Fauci,” Marshall’s letter read.

“HHS and component agencies, including NIH [National Institutes of Health] in particular, continue to obstruct numerous congressional investigations through refusal to provide responsive information. In addition to withholding information from Congress, private parties note that NIH refuses to comply with Freedom of Information Act (FOIA) requests until forced to do so by court order,” he continued.

He also noted that all NIH record-keeping practices need to be closely watched.

He also reminded Becerra that “any employee who conceals, destroys, or attempts to conceal or destroy a federal record may be subject to fine and imprisonment of up to three years.”

Marshall furthermore requested all communication records that involved any official business, even if the communication was conducted via personal accounts, text messages or even burner phones.

“I ask that you immediately confirm that HHS is preserving these records,” the letter added.

This strongly worded request to Becerra comes on the heels of other congressional Republicans’ aggressive comments about Fauci and the need to keep looking into his actions, particularly concerning the pandemic. 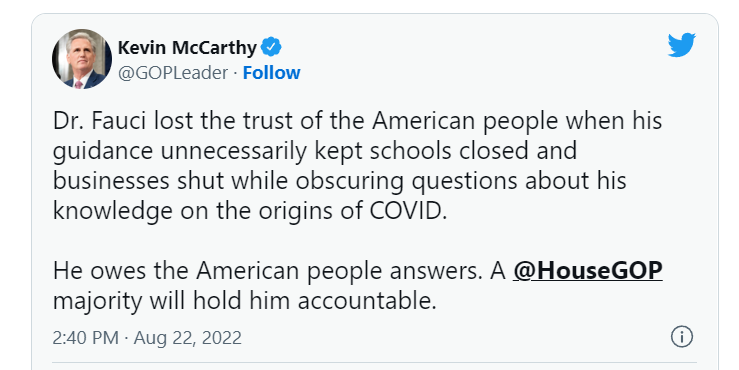 Republican Representative Steve Scalise of Louisiana, who is also a ranking member on the Select Subcommittee on the Coronavirus Crisis, said that now that Fauci is retiring, he will have plenty of time for Congressional hearings.

“It’s good to know that with his retirement, Dr. Fauci will have ample time to appear before Congress and share under oath what he knew about the Wuhan lab, as well as the ever-changing guidance under his watch that resulted in wrongful mandates being imposed on Americans,”  Scalise said in a statement, according to The Hill.

Fauci should have been indicted already. God knows there’s an abundance of evidence.