Below is the email they sent me. My response follows. 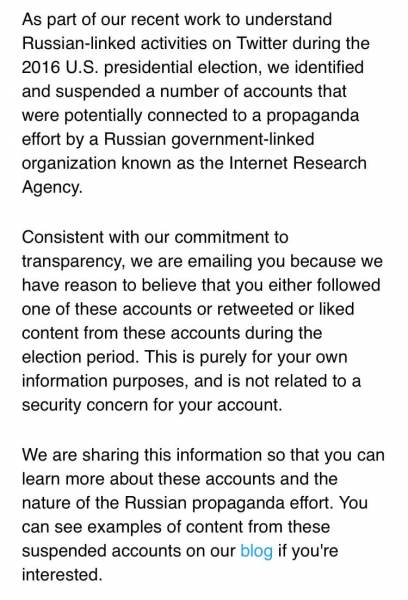 Evidently, they’ve mass-emailed this shit to all Twitter users they think are ‘Russian bots”.

From  The Gateway Pundit

On Friday, Twitter sent out an email to Twitter users regarding the so-called ‘Russian influence campaigns’ that took place on the social media platform during the 2016 presidential election.
The subject line of the email from Twitter read, “Information Regarding Russian Influence Campaigns on Twitter”.

The email informed users that Twitter is actively working to understand ‘Russian-linked activities’ on the platform that took place during the 2016 presidential election. Twitter claims they have identified and suspended a ‘number of accounts that were potentially connected to propaganda efforts by a Russian government-linked organization known as the Internet Research Agency’.

Twitter went on to say there is no security concerns with the user accounts who receive these emails.

The social media giant also linked to a blog where people can view content from the suspended accounts.

According to Twitter’s blog post, they sent this email to 677,775 people in the United States:

“Consistent with our commitment to transparency, we are emailing notifications to 677,775 people in the United States who followed one of these accounts or retweeted or liked a Tweet from these accounts during the election period. Because we have already suspended these accounts, the relevant content on Twitter is no longer publicly available.

In total, during the time period we investigated, the 3,814 identified IRA-linked accounts posted 175,993 Tweets, approximately 8.4% of which were election-related.”

Twitter closed the email by saying they are actively working to stop malicious accounts and tweets from spreading and are committed to being transparent.

What about all of the fake Hillary Supporter accounts?

What does Twitter consider ‘malicious’? Well according to Project Veritas’ new undercover videos, Twitter is actively targeting Trump supporters with their algorithms.

Also, why does Twitter discriminate against Russians? Are they investigating other countries besides Russia who may have tweeted about the 2016 presidential election?

By the way, here’s their Twitter tool who decides who’s a ‘Nazi’: 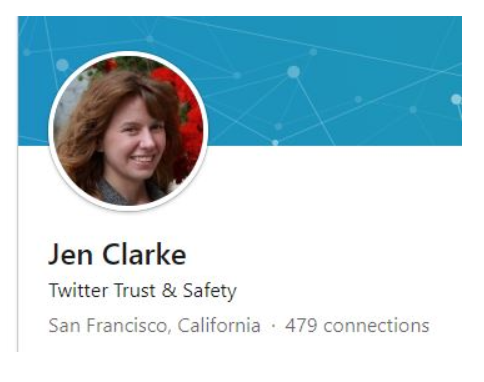 This is the Twitter page of the liberal scrunt (https://twitter.com/jenclarke) who runs  Twitter support. She lets Antifa, BLM, and other leftwing extremist blowhards run rampant with their hatespeech and rhetoric all over Twitter, but, conservatives get censored.

Her own Twitter timeline is full of race-baiting, anti-Trump, pro-Left, pro-Obama, anti-white posts and lots of support for the NFL douchebags who disrespect the flag and the anthem.

One of the ways the Twitter hierarchy has been censoring unwanted political viewpoints is ‘shadow banning’.  Twitter maintains a ‘whitelist’ of favored Twitter accounts and a ‘blacklist’ of unfavored accounts. Accounts on the whitelist are prioritized in search results, accounts on the blacklist have their posts hidden from both search results and other users’ timelines.  The blacklist usually consists of right-leaning posters. Leftwing lunatic fringe, racist minorities, and muzzie extremists,  get a pass.

Fuck you, Twitter. And the leftwing fascist horse you rode in on.