I wonder who supplied them with the political garb and rehearsed the kneeling bit? They look primed to vote Dem as soon as they get in. 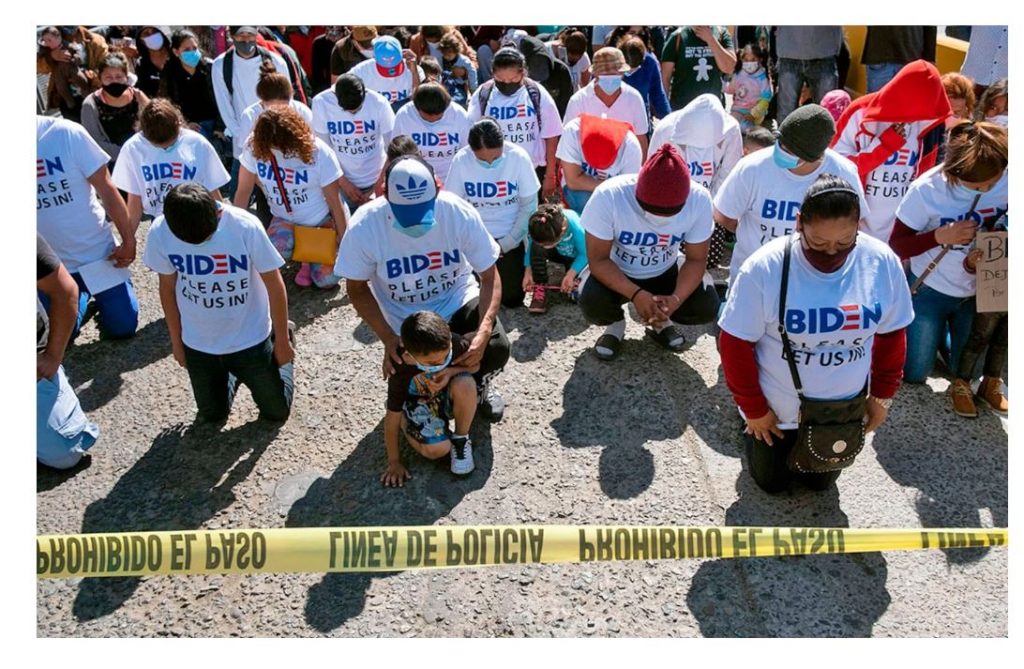 Illegal immigrants crossing the U.S.-Mexico border were wearing t-shirts emblazoned with the phrase “Biden, Please Let Us In!”

According to Fox News, the migrants were photographed at the San Ysidro crossing port in Tijuana on Tuesday

One apparent migrant held up a poster that read, “Biden, please let us in!”

Prospective U.S. residents and progressive Democrats are hoping the new president will implement more lenient immigration policies than former President Trump, though some politicians like Rep. Alexandria Ocasio-Cortez, D-N.Y., have expressed concern with Biden’s use of migrant holding facilities at the border.

As the Daily Wire points out, two Democratic lawmakers have warned that the Biden Administration is creating a crisis at the U.S.-Mexico border.

According to Axios, Rep. Henry Cuellar (D-TX) reportedly warned the Biden administration “against easing up too much on unauthorized immigrants, citing their impact on his constituents, local hospitals and their potential to spread the coronavirus.”

“Well, my concern at this in the recent weeks in my district, migrants who made it across the border, who even pass the line of MPPs [Migrant Protection Protocols], who were 5,000 folks that have been waiting for two years across the border, made it across the Rio Grande Valley, were processed and released,” Gonzalez said. “If that is the message that we send to Central America and around the world, I can assure you, it won’t be long before we have tens of thousands of people showing up to our border.”

“And it’ll be catastrophic for our party, for our country, for my region, for my district, in the middle of a pandemic, in an area where we’ve lost over 3,000 people in my small congressional district,” he said.

When Dems object to the invasion, you know it’s bad.  The problem is, they’re a fucking day late and a dollar short. This shit has been endorsed by their party for years. Dems were all for enforcing the immigration laws until they became political tools.  Now they ignore the laws and simply tell foreign nationals to come right in as if that justifies the crime.