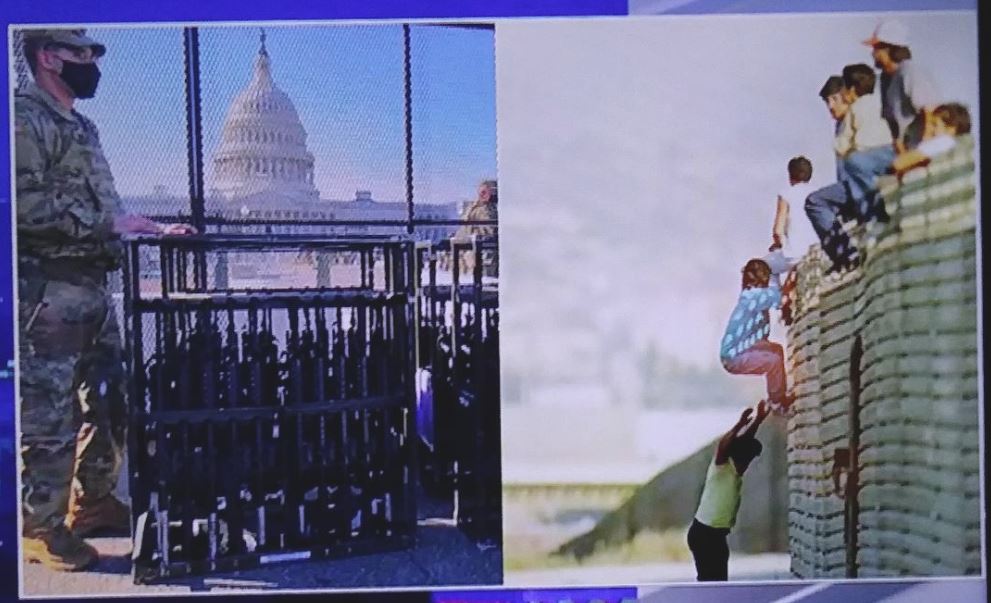 A barrier against the incursion of foreign nationals is unacceptable, but putting up ramparts around the Capitol because Dems fear We The People is all right.

……there are nearly 10,000 federal troops in America’s capital city. Why are they there? How long will they be staying? No one is being very clear about any of that.

So you’re left to draw your own conclusions, which people naturally are doing. By the way, it’s not making anyone more moderate. If you’re really worried about extremism, you probably wouldn’t put 10,000 federal troops in your capital city, making everyone more radical and crazy. But they don’t care about that. The point of this whole highly militarized exercise is to remind you of what Mao Zedong once famously said: “Political power grows from the barrel of a gun.”

Rep. Tim Ryan, D-Ohio, explained Wednesday that we’re not letting these soldiers go home until they do what our Special Operations Forces did in Iraq and Afghanistan.

RYAN: Who in our government and our military have had experience around crowd control, maybe even Special Operations Forces in Iraq and Afghanistan? Like, how can we learn everything we need to learn to reset the posture on Capitol Hill? And we’re not going to let the National Guard go home or we’re not going to create an unsafe environment for the country’s business until we have that figured out.

CARLSON: Oh, they’re specialists in controlling unruly populations. We get it. Rather than answer our questions or improve our lives, you’re bringing in people with guns to remind us that you’re in charge and dissent is illegal. That’s a big change.

Speaking of unsafe, where has Ryan been the entire time Antifa and BLM thugs have assaulted, murdered, and committed arson to the tune of about $2 billion?

But they’re supported by Dems, so it’s okay.

This is coming from the same party that runs Seattle, Portland, Minneapolis, and Baltimore.

Remember when BLM tried to burn down St. John’s church in D.C. when they set fire to the town?  60 Secret Service agents and 40 US Park Police were injured — 22 of those officers hospitalized with serious injuries. Pelosi called them ‘peaceful protesters’.

They don’t care about the carnage inflicted by the anarchist thugs in your neighborhood but don’t you dare protest in the hallowed halls of corruption. That will earn you a spot on Biden’s “National Terrorism Threat” bulletin.  Communities are under threat from gangs and riots from the approved mobs. That’s where the National Guard can do the most good.

In contrast, Biden prioritizes illegals over citizens. This piece of shit not only stopped the construction of the border wall but now he intends to bring deported illegals back into the country to get amnesty.

The dregs are taking this as an invitation. 200 illegals jumped out of a semi-truck at a Texas gas station.

Dems were all for enforcing the immigration laws until they became political tools.  Now they ignore the laws and simply tell foreign nationals to come right in as if that justifies the crime.

When illegals get across the border, they bring more crime with them.

Hundreds of crimes are committed by these vermin. Cop killers, rapists, child molesters, murderers, thieves, robbers, gangs (MS13s), and a slew of other human garbage are coming into this country illegally and committing more felonies once they get in.

They’re also smuggling children for human trafficking, which doesn’t seem to bother the Dems in the least.

This isn’t ‘asylum’ as the Dems insist.  If illegals wanted asylum, they could have stopped in Mexico.  There are nine U.S. consulates and one U.S. embassy in Mexico where non-U.S. citizens can apply for asylum without being separated from their children. Real asylum seekers are not the primary motivation for the Left’s push for total amnesty.  It’s part of their effort to create more dependents on the Dem plantation and add these foreign nationals to their voting bloc.

We’re not getting hard-working people who want to become citizens and assimilate into American culture. We’re literally getting the dregs of humanity that are being shipped in with the help of leftist groups in America and south of the border. Many of the ‘migrants’ are young adult males with considerable crime records and gang affiliations.

If the Dems don’t mind the invasion of undesirable foreign nationals, then dump them in the Hamptons or Biden’s upscale Greenville, Delaware neighborhood.