Harris was heard to say as she boarded the plane out of the country: “You can’t pin this shit on me!”

Vice President Kamala Harris on Friday is leaving for a trip to Vietnam and Singapore, just as the Biden administration is grappling with ongoing chaos in Afghanistan.

The trip to Asia includes stops in Singapore and Vietnam and comes after she traveled to Mexico and Guatemala in June. Senior administration officials said the trip would focus on three issues: global health, economic partnership and security.

The trip to Singapore will include conversations with Singapore President Halimah Yacob and a bilateral meeting with the prime minister. The vice president will deliver remarks aboard a U.S. combat ship outlining plans for U.S. engagement in the region.

In Vietnam, she will hold a virtual meeting with Association of Southeast Asian Nations health ministers and visit a new regional office of the Centers for Disease Control and Prevention (CDC). On the way back to the U.S., she will visit troops stationed in Hawaii.

Harris will likely use the trip to address the issue of growing Chinese power and influence – including the communist regime’s efforts to take control of the South China Sea and issues regarding trade and security.

……The trip has raised questions about why Harris is going as the administration grapples with the crisis in Afghanistan, which has drawn comparison to the evacuation of the U.S. embassy in Saigon at the end of the Vietnam War.

Focusing on a distraction like the scamdemic is typical Biden regime tactic. Instead of concentrating on Russia and China’s growing military threat, they’re busy filling Biden’s Facebook timeline with vax propaganda:

And infecting the U.S. armed forces with CRT indoctrination.

Oh, and Kammy posed in front of a statue of Ho Chi Mihn. 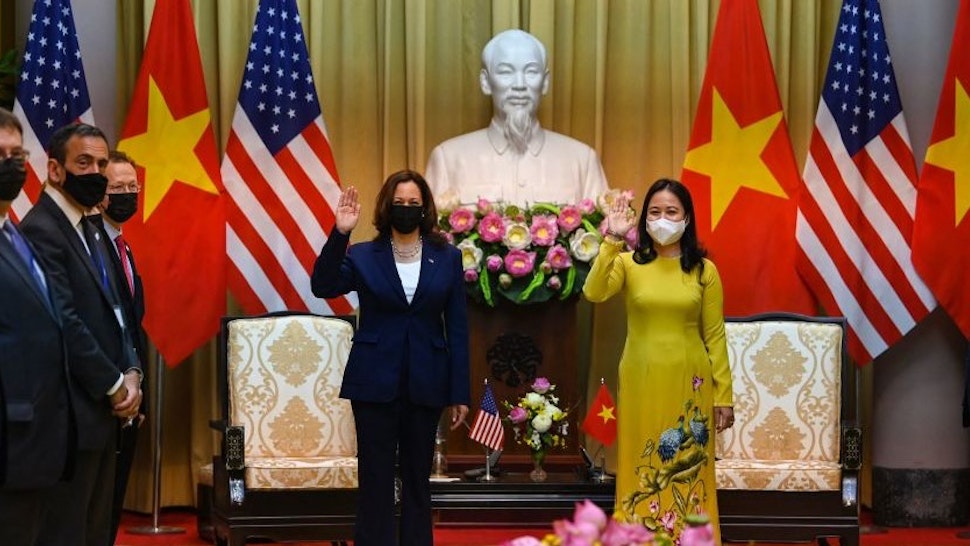 Biden’s priorities are fucked. When you install incompetence and corruption, you get exactly that.