Over the weekend a Good Samaritan stopped a tragedy:

“Police in Greenwood, Indiana, described the moment a good Samaritan tactically took down an individual suspected of shooting several people on Sunday.

“His actions were nothing short of heroic. He engaged the gunman from quite a distance with a handgun, was very proficient in that, very tactically sound,” Greenwood Police Chief James Ison said during a news conference on Monday afternoon. “As he moved to close in on the suspect, he was also motioning for people to exit behind him. He has, to our knowledge, he has no police training and no military background.”

Multiple witnesses, reports, call him a “hero” because he is a hero. According to anti-Second Amendment activists, including the Brady Group quoted below, the hero is a “vigilante.” 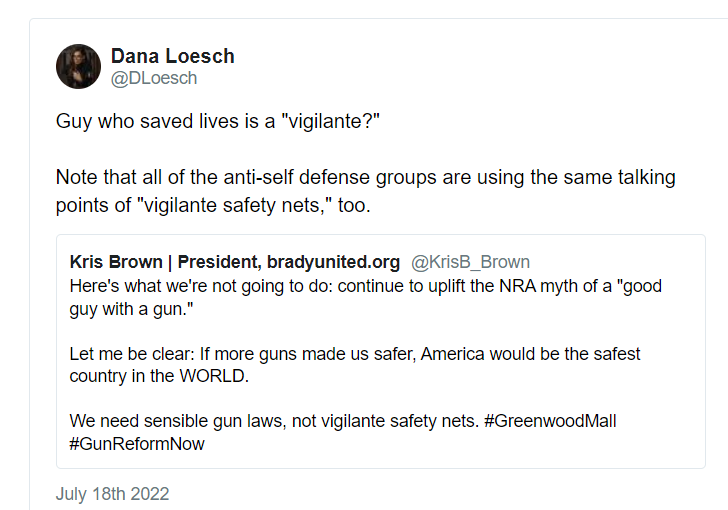 “Vigilante safety net?” Self defense is now vigilantism? This is such irresponsible quackery. First, these innocent people didn’t seek engagement. They were minding their business when crime happened in front of them. Secondly, “vigilantism” is a word with a meaning and the lawful defense of life doesn’t qualify. Proper usage of words in these discussions is important because certain legal penalties may or may not come into play depending on the classification of actions as described by said words.

Frankly, we could have used a couple of “vigilantes” in Uvalde as the only people the Brady group wants armed stood outside for 77 minutes.

Attacking the “good guy with a gun” phrase is the latest attack in anti-Second Amendment activism.

In these activist’s minds, there is no such thing as a “good guy with a gun.” They don’t regard firearms an inanimate objects — they think guns are cursed talismans that impart on their bearers an insatiable desire to do harm.

Self defense is condemned because you may imperil the criminal in the process of defending your obviously less valuable life.

In the world of the anti-firearm activists, there is no right to self defense, but there is a right afforded to criminals: the right to commit violent criminal actions without the expectation of physical force as a deterrence.

“Let me be clear: If more guns made us safer, America would be the safest country in the WORLD.”

Well, more guns do make us safer. You don’t have to take my word for it, you can read about the prevalence of defensive gun uses from our own CDC on that — and how they tried hiding their findings to support an anti-Second Amendment narrative.

The absence of evil makes us safer. While we can’t legislate evil out of existence the remedy isn’t to legislate from existence the ability for innocent people to avail themselves of a criminal’s violent actions. 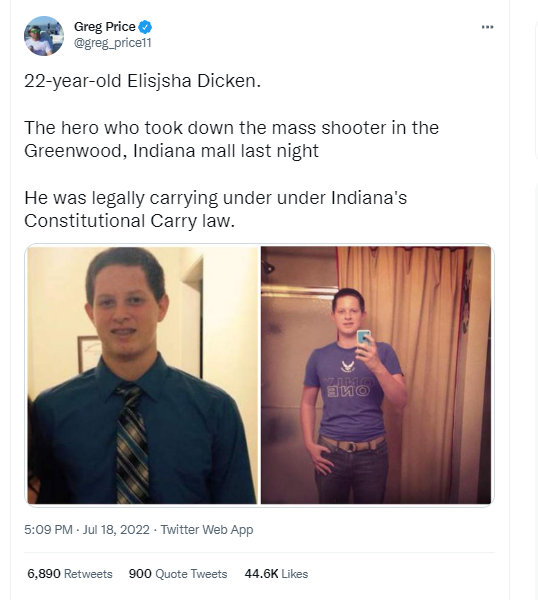 Liberals have a habit of thinking that “gun control” is a good idea as long as they can hide in their exclusive communities.  With the onslaught of barbarians at the gate, all that is changing. Some libs have changed their tune after the rude awakening of violent crime invading their neighborhoods.

Violent crime has spiked off the charts thanks to the Dems’ defund the police agenda and the refusal of Dem prosecutors to actually keep thugs in jail and charge them with the crimes they commit.

Dem-controlled cities are experiencing an unprecedented crime wave of murder, assault, and mass looting. Their ‘defund the police‘ campaigns and bailing out criminals quickly turned their towns into a wasteland; roving hordes of gun and club wielding goons destroying every business they could demolish.

When some mentally deranged nutbag  goes on a killing spree, all of the anti-Second Amendment trolls come crawling out of the woodwork.  The only ones who would benefit from oppressive anti-gun rights are criminals who don’t give a damn about the law to begin with.  Felons and unhinged crazies have at least one thing in common; they go for soft targets; vulnerable, unarmed people who cannot fight back.

Anti-gun nuts target the Constitution because they have a visceral hatred of the freedoms it guarantees for people who actually believe in the document.  They care less about government overreach than they do about real public safety. They’re candy-assed effete who want to eviscerate gun rights in their quest to make everyone knuckle under The State.

Armed criminals deliberately choose soft, unarmed targets. They couldn’t give one shit less about the idea of restrictive gun laws.  Every law-abiding American citizen has the right to defend themselves.