Another convert to a religion that commands its followers to commit treason and mass murder. 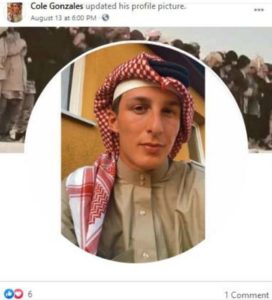 An American Soldier has been arrested on terrorism charges, including suggesting wiring explosives into buildings as part of an Islamic State plot to kill US troops, as well as allegedly planning an attack on the 9/11 Memorial.

Ohio man Cole James Bridges, 20, was held in Georgia on Tuesday, and is charged with the assistance of a foreign terrorist organization and the attempted murder of US military service members, the US Attorney’s Office said in a statement.

The private first class, also known as Cole Gonzales, had expressed his support for the terrorist Islamic State group (IS, formerly ISIS/ISIL) on social media, according to the criminal complaint unsealed on Tuesday in Manhattan Federal Court.

After joining the US Army in late 2019, Bridges began unknowingly communicating with a member of the FBI in October last year, with the bureau employee posing as an IS supporter who claimed to be in touch with the terrorist group in the Middle East.

The Soldier is then said to have used his Army training to guide supposed IS fighters about potential attacks in New York City, including on the 9/11 Memorial.

In December 2020, Bridges allegedly provided diagrams of “specific military maneuvers” to help IS fighters “maximize the lethality of attacks on US troops” while also pledging his allegiance to the terrorist group in videos. He suggested militants should wire particular buildings with explosives in order to kill American troops, the charges claim….

Take the motherfucker out and shoot his ass.

They don’t worship their ‘religion’ in peace. Their Quran prescribes the exact atrocities and violence they carry out every day, especially the systematic Islamic-inspired hate crimes and terrorist attacks against Westerners in Europe and the United States.

Islam is diametrically opposed to democracy.  Terrorism is part of their ‘religious’ doctrine. Under the muzzie point of view, Sharia Law trumps all other laws. It’s meant to overtake and replace all Western civil, criminal, and government jurisdiction.  They’re not interested in peace, tolerance, or coexistence. They want a worldwide Caliphate, including the United States.

Nidal Hasan spewed Islamic rhetoric during briefings, signed his emails with “Praise Be to Allah,” and told a female supervisor she was an infidel who would be “ripped to shreds” and “burn in hell” because she was not muslim. He did this on multiple occasions before he gunned down 14 Soldiers at Ft. Hood for allah.

The Army hierarchy refuses to acknowledge radical muslims in the ranks.

Any service member who is a muzzie or converts to Islam should be booted from the military.